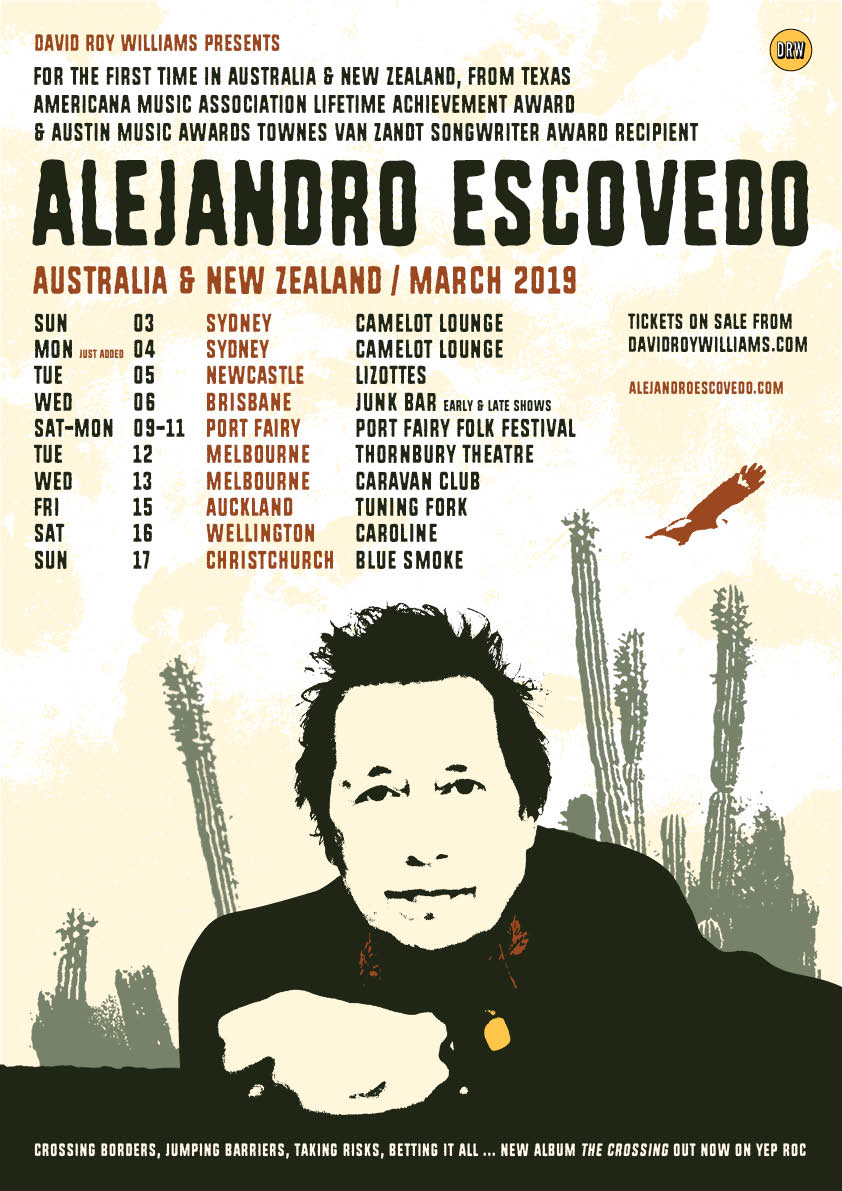 Alejandro has decided to cancel Sunday’s night’s show at the Blue Smoke in Christchurch. “We feel the weight of the loss and want to respect everybody in this time of mourning. it has impacted us greatly. We will return and want to help in any way possible in Christchurch and New Zealand’s recovery from this.”

Ticket holders will be refunded automatically.

Recipient of the AMERICANA MUSIC ASSOCIATION’S LIFETIME ACHIEVEMENT AWARD, the Austin Music Award’s TOWNES VAN ZANDT SONGWRITER AWARD and NO DEPRESSION magazine’s ARTIST OF THE DECADE, the legendary Mexican-American singer-songwriter will tour on the back of his acclaimed new immigration-themed album The Crossing.

DRW Entertainment is proud to present, for the first time in Australia & New Zealand, much loved Mexican-American singer-songwriter Alejandro (pronounced Al-e-han-dro) Escovedo. Alejandro will perform at the Port Fairy Folk Festival and at side shows on the East Coast in March 2019.

Alejandro Escovedo is a seminal figure in Texan music and one of the most acclaimed American songwriters of his generation. He’s a recipient of the Americana Music Association’s Lifetime Achievement Award, and, as has been recently announced, he will be honored with the Townes Van Zandt Songwriter Award at next year’s Austin Music Awards. He’ll be only the third recipient of that honor in the Awards’ 37-year history, in a town that he helped put on the musical map.

Alejandro has released 11 solo albums and contributed to numerous others, as both band member and guest. His songs have been recorded by the likes of Lucinda Williams, Steve Earle, Ryan Adams, Cowboy Junkies,and Calexico, and he’s shared stages with everyone from Bruce Springsteen to John Prine to Mott The Hoople’s Ian Hunter. REM’s Peter Buck and the Velvet Underground’s John Cale have both served as Alejandro’s sidemen in addition to being his producers, a role also filled by legendary Bowie and T.Rex producer Tony Visconti, who produced a run of three albums for Alejandro spanning 2008-2012.

A troubadour-like figure with an ever-expanding clutch of classic and evocative songs, Alejandro Escovedo’s past is nothing if not chequered. His trailblazing career began with The Nuns, San Francisco’s famed punk innovators who opened the Sex Pistols’ final show in 1978, and continued into Austin-based-based alt-country rock pioneers, Rank & File, whose Slash Records debut Sundown found a home in many Australian record collections in the early ‘80s cowpunk days. Austin’s blazing ‘80s guitar army True Believers set Alejandro up as a true local hero, and by the time he released his first solo album in 1992, he was a key player on the national scene.

Alejandro’s rise as a solo artist was adjacent to that of the alt-country-slash-Americana movement, and as the scene’s pioneer he was named “Artist of the Decade” in 1998 (they named him early because he was the only front-runner) by the movement’s influential journal No Depression. His annual performances at Austin’s SXSWfestival, the patronage of key international media including Rolling Stone and Uncut, and the support of influential Chicago label Bloodshot Records all conspired to push Alejandro to the forefront of the Americana scene by the turn of the century.

Alejandro’s latest album, The Crossing, released in September 2018 on Yep Roc and one of the most acclaimed of his career, looks at matters of immigration and the broken Promised Land that is America through the focused and unflinching poetry Alejandro is known for. Recorded with Italian musician Antonio Gramentieri, the album tells a story of a pair of young Mexican and Italian musicians trying to find a home in today’s America. It includes cameos from underground rock royalty in the personages of MC5 guitarist Wayne Kramer, Stooges guitarist James Williamson and Peter Perrett and John Perry of The Only Ones (recording together for the first time in over 40 years), as well as Texan country great Joe Ely and acclaimed novelist and Richmond Fontaine/Delines songwriter Willy Vlautin.

American Songwriter has called the album “one of the most passionate, relevant, politically charged and personal projects he has released in a career pushing 40 years.”

The subject of a strong demand to tour Australia for decades now, the now-Dallas based Alejandro will finally head down under in March. He’ll be performing solo; he has built a body of songs and developed as a live performer to the extent that his stark solo presentation is now one to rival similar artists like Guy Clark, Rodney Crowell, John Prine and Steve Earle. And given his penchant for sharing the stage, who knows who might get up for a song while he’s here?

The first visit by such a long established and indeed truly iconic artist is a rare thing these days, and these landmark shows by Alejandro Escovedo – at the Port Fairy Folk Festival and up and down the Australian East coast, as well as in New Zealand – are not to be missed by any fans of great songwriting and passionate performance.