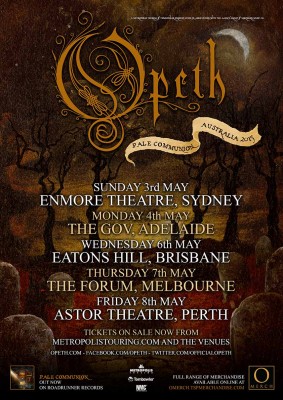 Swedish progressive metal heroes Opeth are set to return to Australia in 2015 in support of their 11th album ‘Pale Communion’. Hailed as one of the most influential progressive metal bands in the world, Opeth have an ever-growing fanatically loyal fan base in Australia and are returning for a headline run after their highly successful ‘Heritage’ tour in 2013.

One factor which makes Opeth‘s live shows second to none is that their concerts are always filled with surprises and you never know what their setlist is going to be! Featuring songs from their earlier death-metal material, up to their later symphonic prog-rock, an Opeth live show is like no other and is a must see for all die-hard fans.

“It’s the perfect combination of stunning visuals, crushing sound, and a flawless performance.” – The Metal Forge

Now approaching 25 years as a band, Opeth have continued to evolve with their album releases and ‘Pale Communion’ sees them again pushing new boundaries. The album, which was produced by the band’s very own Mikael Åkerfeldt and mixed by longtime collaborator and Porcupine Tree frontman/guitarist Steven Wilson, was incredibly well received all around the world and came in at #17 in the ARIA Charts, making it their 5th ARIA chart appearance.

“An admirably coherent collection of songs that are as uncompromisingly intricate and strange as they are incisively melodic.” – The Guardian

When you combine the massive sound of the live renditions of their songwriting masterpieces and the outrageous stage antics of captivating frontman, Mikael Åkerfeldt, this Opeth tour promises to be one for the ages!

“The complexities of Opeth are best experienced in the flesh, and their seamless fusion of a whole spread of genres – folk, death, jazz, doom, classical, you name it – was all the more impressive when done on the spot.” – SFMedia

If there’s one tour that you attend in 2015, make sure it is this one. Whether you’re watching Opeth for the 1st or the 5th time, each experience will have you walk away feeling mesmerized and inspired. Prepare yourselves for the mighty Opeth!

“This concert proved that you could travel in time to three different decades all in one night, and sometimes even in one song.” – Heavy Mag