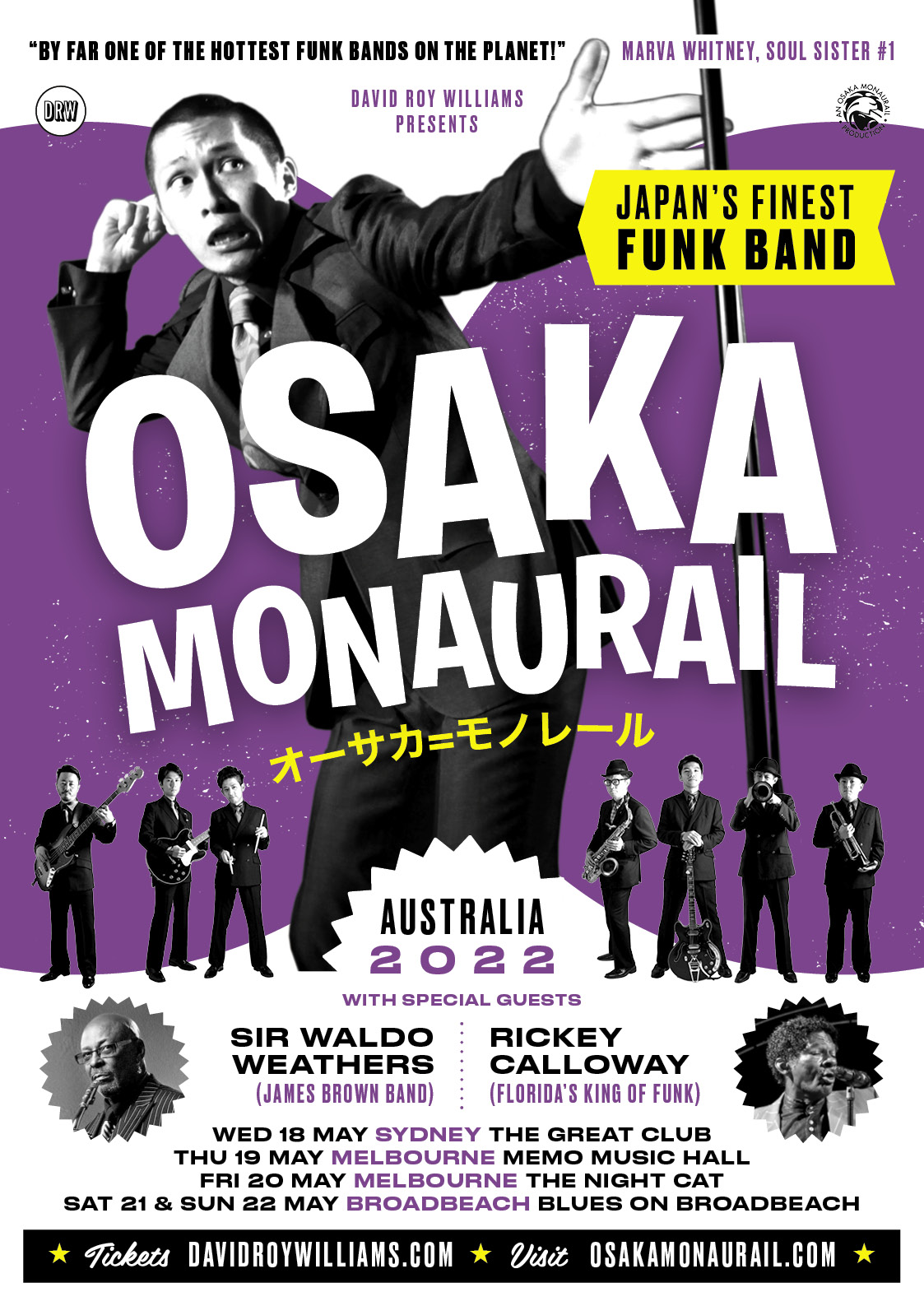 “By far, one of the hottest funk bands on the planet.” Marva Whitney, Soul Sister #1

JAPAN’S PREMIERE FUNK ORCHESTRA TO BE JOINED BY THE KING AND THE POPE.

KING OF FUNK RICKEY CALLOWAY AND THE POPE OF FUNK WALDO WEATHERS (JAMES BROWN BAND) IN AUSTRALIA FOR BLUES ON BROADBEACH MUSIC FESTIVAL.

The sensational Osaka Monaurail are Japan’s premiere funk orchestra. With their sharp suits, synchronised routines, and powerful horn section, Osaka Monaurail will have your feet movin’ and your hips shakin’ from the moment they hit the stage.

And in a world exclusive, OM will be joined on stage by funk legend RICKEY CALLOWAY and the man who played sax with James Brown’s Band for 15 years, SIR WALDO WEATHERS.

Led by the explosive showmanship of charismatic singer and director Ryo Nakata, Osaka Monaurail have been funking it up for nearly three decades, thrilling audiences across Europe, North America, Asia and Australia with their dynamic and energetic show. Here’s a bunch of guys who have played the biggest festivals in the world to the tightest clubs on the planet and brought the dance floor to exuberant volcanic like eruptions everywhere they go!

“Each well-timed move thrilled the excited crowd. By the end of the show, the dance floor was a mass of funk converts who, even if they had wanted to, were unable to stop themselves dancing feverishly to the explosive rhythmic energy that Osaka Monaurail generated.” Upside news

RICKEY CALLOWAY started outperforming James Brown covers in his hometown of Jackson Florida before releasing the deep groove “Tell Me”. Follow up singles failed to hit, and Rickey retired from the music biz. Decades later Rickey was astounded to discover that copies of “Tell Me” had become highly coveted by funk aficionados and were trading for hundreds of dollars. Rickey’s much-celebrated comeback has seen amazing performances as well as a steady stream of releases on the Funk Night label, including featured backing from Daptone house band, the Dap-Kings (Sharon Jones/ Mark Ronson).

SIR WALDO WEATHERS started out in R&B bands at the age of 12 but has since played everything from jazz to country, and soul to funk. A member of Charley Prides band from 1979 to 1989, Waldo was inducted into the Country music Hall Of Fame in 1985. Waldo played sax with James Brown’s band from 1993 to 2008, playing on albums such as Live At The Apollo 1995, and James Brown at the House Of Blues, as well as inspiring Brown’s Waldo Dance. Weathers has also appeared on stage with BB King, Al Green, Phil Collins, Harriet Lewis, Little Richard, and many more.

Formed out of Osaka University’s jazz society in 1992, Osaka Monaurail took James Brown’s funk template as ‘the gold standard’ for a rhythm combo, named themselves after the 1975 Funk classic “J.B.’s Monaurail”, and set out to be the new ministers of super heavy funk for future generations.

Osaka Monaurail is no stranger to our shores either, having wowed club goers, as well as knocking the socks off crowds at the Sydney Festival, Golden Plains, WOMADelaide and Meredith Festival.

“Frontman Ryo Nakata is more like James Brown than he has any right to be; the voice, the mannerisms, the sense of humour… it’s all perfect.” Double J

Having toured and recorded with James Brown associated funk icons Marva Whitney, Fred Wesley and Martha High, Osaka Monaurail are on a mission to capture the energy, sound and excitement of funk’s heyday.

“As a showman, Nakata does not disappoint with his contagious energy, smiles or cheeky grins that transmits his soul feeling flawlessly to the audience throughout the gig… A bitchin’ night of Japanese funk!” Matrix Barcelona