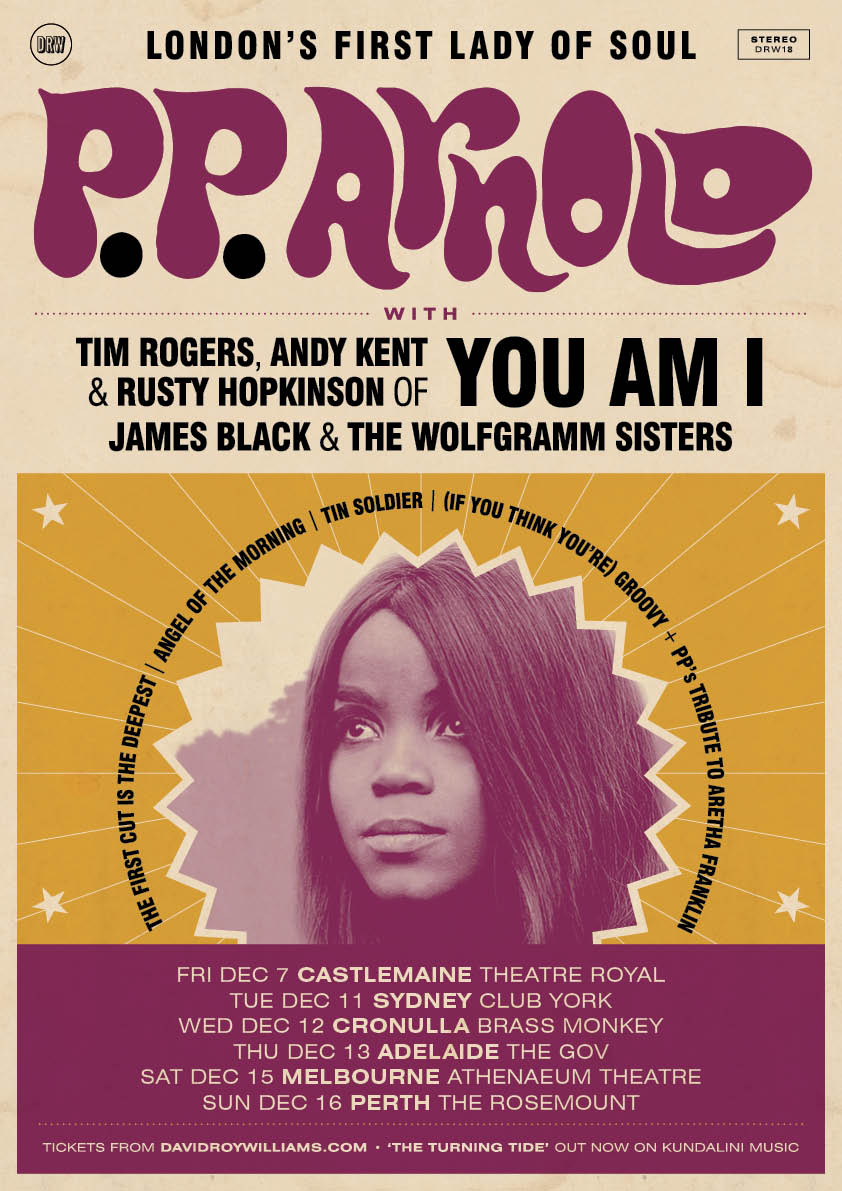 PERTH SHOW  AT THE ROSEMOUNT HOTEL ON DEC 16TH is now cancelled.

The ‘60s Soul/Swinging London icon returns in November & December for more shows with her band featuring Tim Rogers, Andy Kent and Russell Hopkinson of You Am I, Talei & Eliza Wolfgramm and James Black; as well as select shows the Rockwiz Orchestra.

She was the Los Angeles teenager who became London’s First Lady of Soul after hitting town in 1966 with Ike & Tina Turner and coming to the attention of Mick Jagger. She’s best known for her beautiful and classic mid-to-late ‘60s hits including “The First Cut Is The Deepest”, “(If You Think You’re) Groovy” and “Angel of the Morning”, as well as the powerful chorus of the Small Faces’ iconic hit “Tin Soldier”. She became so identifiable with that era that she guested alongside Marianne Faithful in the final episode of the original series of “Absolutely Fabulous”.

Having toured here as featured vocalist in Roger Waters band in 2002 and 2008, PP undertook her own first concert tour of Australia in May this year. The forever young singer and her hand-picked band comprising Tim, Andy & Rusty from You Am I, James Black from Rockwiz and Talei Wolfgramm, wowed crowds across the country. They did it on the back of two days intensive rehearsal and a mutual admiration and love that positively radiated from the stage.

With Talei’s sister Eliza now set to join, PP and her gang return to Australia in December for another round of shows. Whilst all the hits will remain and most of the favourite deep cuts, several surprises are promised, including a tribute to PP’s #1 musical inspiration.

Before she hooks up with the You Am I-based band, PP will perform a few select shows backed by the esteemed Rockwiz Orchestra – James Black, Peter Luscombe, Mark Ferrie and Ashley Naylor. Befitting the Rockwiz team’s love of all things PP, one of those shows will take place at Rockwiz’s spiritual home, the Gershwin Room at St Kilda’s iconic and newly refurbished Esplanade Hotel .

The November-December tour will cap a busy year for PP Arnold, which has seen her tour extensively on the back of the release of “The Turning Tide”, an album of unreleased recordings she made with Barry Gibb and Eric Clapton in the late ‘60s and early ‘70s. With her memoir soon due for publication and a new album. “The Further Adventures of PP Arnold” in the can, co-written and produced by the Ocean Colour Scene’s Steve Craddock and including a contribution from long-time supporter and fan Paul Weller, 2019 promises to be a big year for PP Arnold.