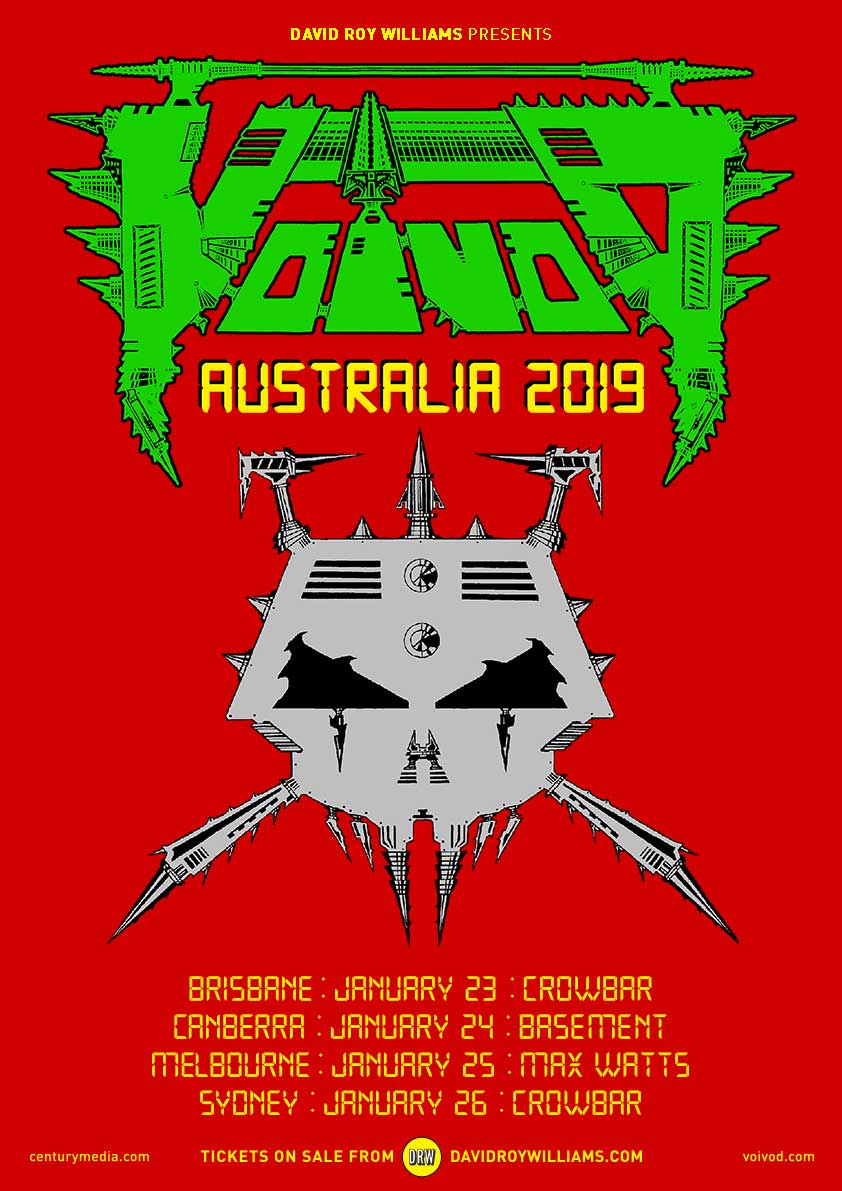 Sci-fi thrash metal prog-punks Voivod are celebrating thirty- five years on the warpath, and are rrröööaaarrring into 2019 in the best possible way for Australian fans with 4 big East Coast shows.

Riding high on the critical success of this year’s compelling album The Wake, fans can look forward to a machine pummelling cruise on the Voivod spacecraft through career defining albums “Killing Technology”, “Dimension Hatröss”, “Nothingface” “Angel Rat” and “The Outer Limits” plus choice tracks from their most recent releases.

VOIVOD have been creating mind-blowing music for 35 years, influencing the likes of Opeth, Tool, Neurosis, Mastodon, The Dillinger Escape Plan and Meshuggah.

Founding member, vocalist Denis “Snake” Belanger prowls the stage and wins crowds with his mischievous charm whilst co-founder Michel “Away” Langevinon drums and new bassist Dominic “Rocky” Larochepulverise the audience with intensely intricate patterns. Having recovered from the devastating loss of Denis “Piggy” D’Amourin 2005, VOIVOD have been invigorated by the increasingly imaginative presence of Daniel “Chewy” Mongrain who, ten years in, not only can channel Piggy’s groundbreaking guitarwork but is developing new dimensions of sound guaranteed to shatter psyches and fire nerve-ends.

“VOIVOD are one of the most underrated and unrecognized outfits in metal. You know it and I know it. They really deserve the recognition from this generation of metal music lovers who don’t quite know about VOIVOD and their incredible influence throughout the years” Jason Newsted

It’s been two decades since VOIVOD last graced Australian stages, so don’t risk having to wait another 20 years… Get tix now and kick off 2019 with one of the most powerful, thought-provoking, flat out thrashingest shows the new year is going to offer.

“…the heaviness of any band that we listened to was gauged by how they live up to Voivod… and nobody ever did.” Dave Grohl