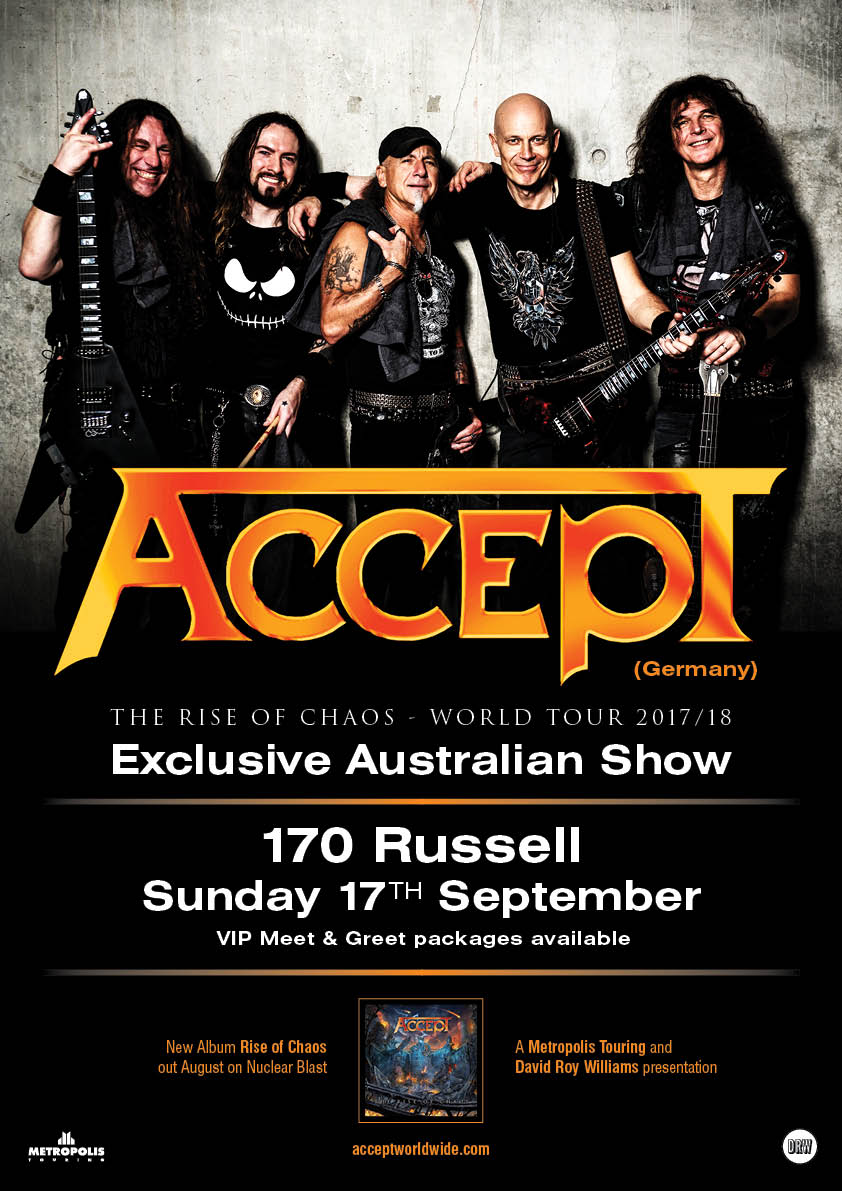 Following their First Ever Australian Tour in 2014, German Thrash Metal Legends ACCEPT return this September for one show only in Melbourne. With multiple Sold Out shows on their last visit, ACCEPT reward fans with One Special Exclusive Performance at 170 Russell on 17th September! THIS SHOW WILL SELL OUT.

Accept’s 15th studio album, “Rise of Chaos”, is set for release on August 4th via Nuclear Blast and Australian fans are amongst the first to catch the new live set. Every single fan of Classic Heavy Metal will want to be fist in air shouting along as one of the hardest working bands in the world belt out highlights from ‘Rise of Chaos’ as well as all their classic anthems – ‘’Balls To The Wall’’, ‘’Fast as a Shark’’, ‘’Metal Heart’’, ‘’Restless and Wild’’, ‘’Teutonic Terror’’ plus many more!

“A nonstop blast from start to finish and ACCEPT were on 100% top form, absolutely outstanding, they get better and better each time I see them.” – Blackdiamond

Having released classic album after album such as ‘Balls To The Wall’, ‘Metal Heart’ and ‘Restless And Wild’, ACCEPT have become one of the most influential and acclaimed metal bands of all time. Their unforgettable vocals and Wolf Hoffmann’s classic riffs became a major part of 80’s Heavy Metal history!

“Great songs, fantastic musicians and a band that works together on stage like clockwork made the show a night to remember” – Heavy Metal Bands Info (Melbourne show review)

This will be an Epic Fan Exclusive that you cannot miss! Judging by the response to their blistering performances last time, this One-Off Show will sell out quickly – if you don’t grab tickets as soon as you can and you miss out, well, hey… don’t say you weren’t warned! ACCEPT are back, firing on all cylinders and as vibrant and vital as ever!

“Had the crowd in frenzy, the voices singing and chanting in unison, people jumping around, and fists in the air.” – Metal Shock Finland

“A memorable show full of energy and classic songs that will be forever remembered among Australian fans.” – Spotlight Report

“I had no idea that Accept would rock my socks off like that. Such energy, such stage presence” – Metal Obsession