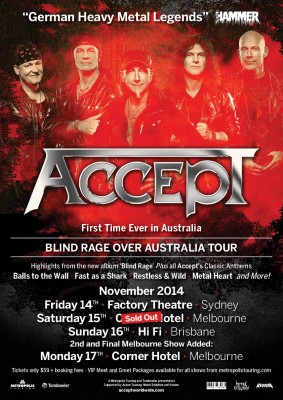 Classic heavy metal was shaped essentially by three highly influential bands: Judas Priest, Iron Maiden and ACCEPT. Two of these legendary acts have graced our shores several times but now finally Australia gets to witness the might of the “Teutonic Terror”themselves for the very first time as ACCEPT are set to arrive in November 2014.

Proudly representing the “Made in Germany” trademark, ACCEPT fashioned distinct musical blueprints that have influenced multiple generations of followers. They have kept their music and artistry relevant around the world and have overcome staggering odds to maintain international careers for over three decades. ACCEPT have released classic album after album with the likes of ‘Balls To The Wall’, ‘Metal Heart’ and ‘Restless And Wild’ all becoming some of the most influential and acclaimed Metallic slabs of all time. The unforgettable vocals of Udo Dirkschneider and riffs of Wolf Hoffmann / Herman Frank became a major part of 80’s Heavy Metal history.

Their anthems of steel are known worldwide and are often cited as one of the earliest innovators of Speed Metal with their track “Fast As A Shark” putting the pedal to the metal like no other before them.

After some line-up changes, non-activity and reunion shows the band breathed new life in 2009 with the addition of Mark Tornillo and since recorded two of the strongest ACCEPT albums yet in “Blood Of The Nations” and “Stalingrad” which both cracked the Billboard Top 200 chart.

ACCEPT were back, but not for nostalgia rather firing on all cylinders and as vibrant and vital as ever. Now they have another killer new album on the way titled ‘Blind Rage’ which Australia will witness as ACCEPT grace our shores for the very first time for 3 exclusive shows. No self-respecting fan of Classic Heavy Metal should miss this tour as they perform highlights from ‘Blind Rage’ as well as all their Classic Anthems – ‘’Balls To The Wall’’, ‘’Fast as a Shark’’, ‘’Metal Heart’’, ‘’Restless and Wild’’, ‘’Teutonic Terror’’ and more!

In the last twelve months ACCEPT have again risen to the top of the Metal elite and played at some of the largest music festivals on the globe including Sweden Rock Festival, HellFest, Bloodstock Open Air,Masters Rock and Bang Your Head. Sprinkle in some headlining shows between festival appearances and you have a normal touring schedule for this hardworking, dedicated band. 2011 marked an astonishing 67 shows in over 7 countries, in three short months. With fists in the air and crowd chanting tracks, ACCEPT have worked tirelessly around the world and now it is Australia’s time.

“A nonstop blast from start to finish and ACCEPT were on 100% top form, absolutely outstanding, they get better and better each time I see them. The performance from all band members was top class; the way they interacted with each other and the crowd, the execution of the whole show was brought together with their skill and professionalism” (Blackdiamond, 2013)

“Had the crowd in frenzy, the voices singing and chanting in unison, people jumping around, and fists in the air.”