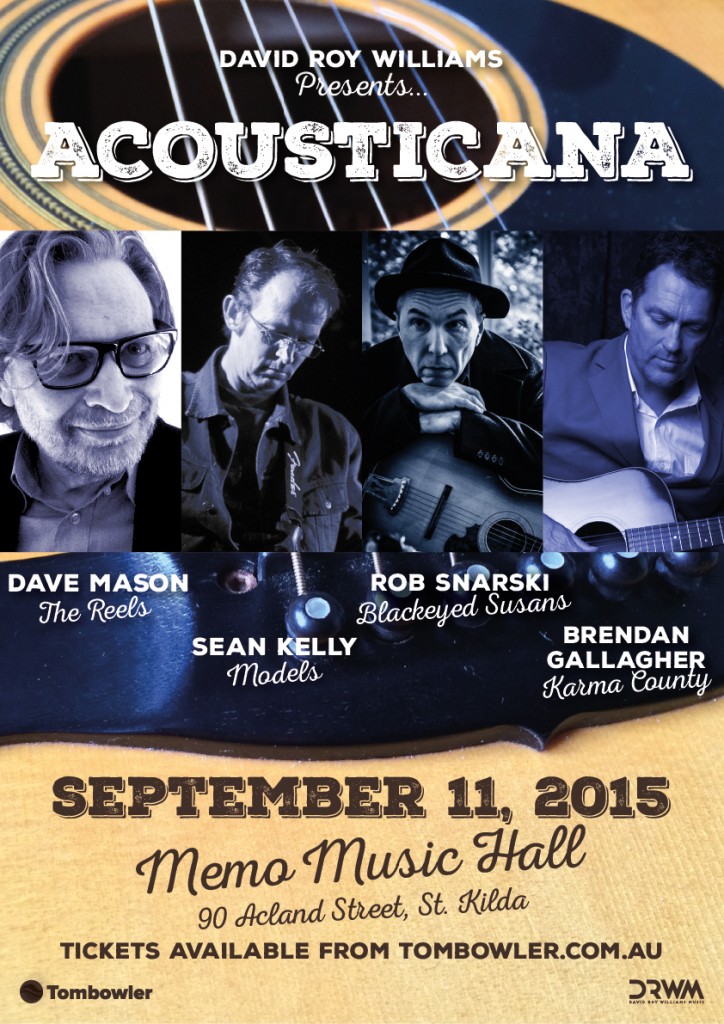 Australian music legends; awe-inspiring songwriting prowess; emotionally naked performances; merged with the realm of arcana – inspiration, mystery… a secret knowledge… yet warmly inviting. Storytelling at its best. Acoustic, yes… this is music raw, open and honest; but is it Americana? – Clearly not. These are artists born of red dust and weaned at the knee of Dame Edna. Dreams of suburbia born of the realities of St. Kilda and the Cross permeate the dreamscape of these master songcraftsmen rendering the Australian experience as real – angry, tender, bleak and yet familiar… comfortable… home.

Dave Mason heads up the bill for this special event. Best known for the haunting Quasimodo’s Dream (number 10 in APRA’s Top 30 Australian Songs of All Time) Dave also penned key compositions Love Will Find a Way, Prefab Hearts, After the News and Shout and Deliver. As lead singer, producer and creative director of The Reels Dave also scored hits with This Guy’s In Love With You, According To My Heart, and Last Night (I Didn’t Get To Sleep At All).

Dave’s absolutely sublime performance with Brendan Gallagher at Melbourne Art’s Centre was a highlight of the 2014 gig calendar and this rare opportunity to catch one of Australia’s best loved performers in singer-songwriter mode is not to be missed.

Sean Kelly, in his role as founding member of Models, has written some of this country’s most influential music, including I Hear Motion, Out Of Mind Out Of Sight, Big On Love and Local And/Or General. The ARIA Hall of Fame inductee also scored a Top 10 album with Absent Friends and performed his Dukes hit, Faith, in front of quarter of a million fans at the announcement ceremony for the Sydney 2000 Olympics.

Respected and admired by his peers and younger artists alike, Sean is a rare breed of musician who successfully and comfortably straddles mainstream success with wide critical acclaim.

Rob Snarski also joins the line-up of Acousticana. After 25 years as the honey-voiced singer of the multi-ARIA nominated Blackeyed Susans, Rob is finding new focus with a stripped-back and intimate sound palette. Rob’s recently released Low Fidelity (Songs By Request Vol 1) provides his own unique take on classic songs including Witchita Lineman and Bridge Over Troubled Water and signature tunes by renowned songwriters including Willie Nelson, Joni Mitchell and Lee Hazelwood.

Brendan Gallagher completes the line-up. Music all-rounder Gallagher has played on recordings for artists from David Bowie to Kylie Minogue and produced, amongst many other albums, Jimmy Little’s masterpiece Messenger. Out front with Karma County, Brendan released six albums including the ARIA award winning Into The Land Of Promise and has released three transcendent solo albums.