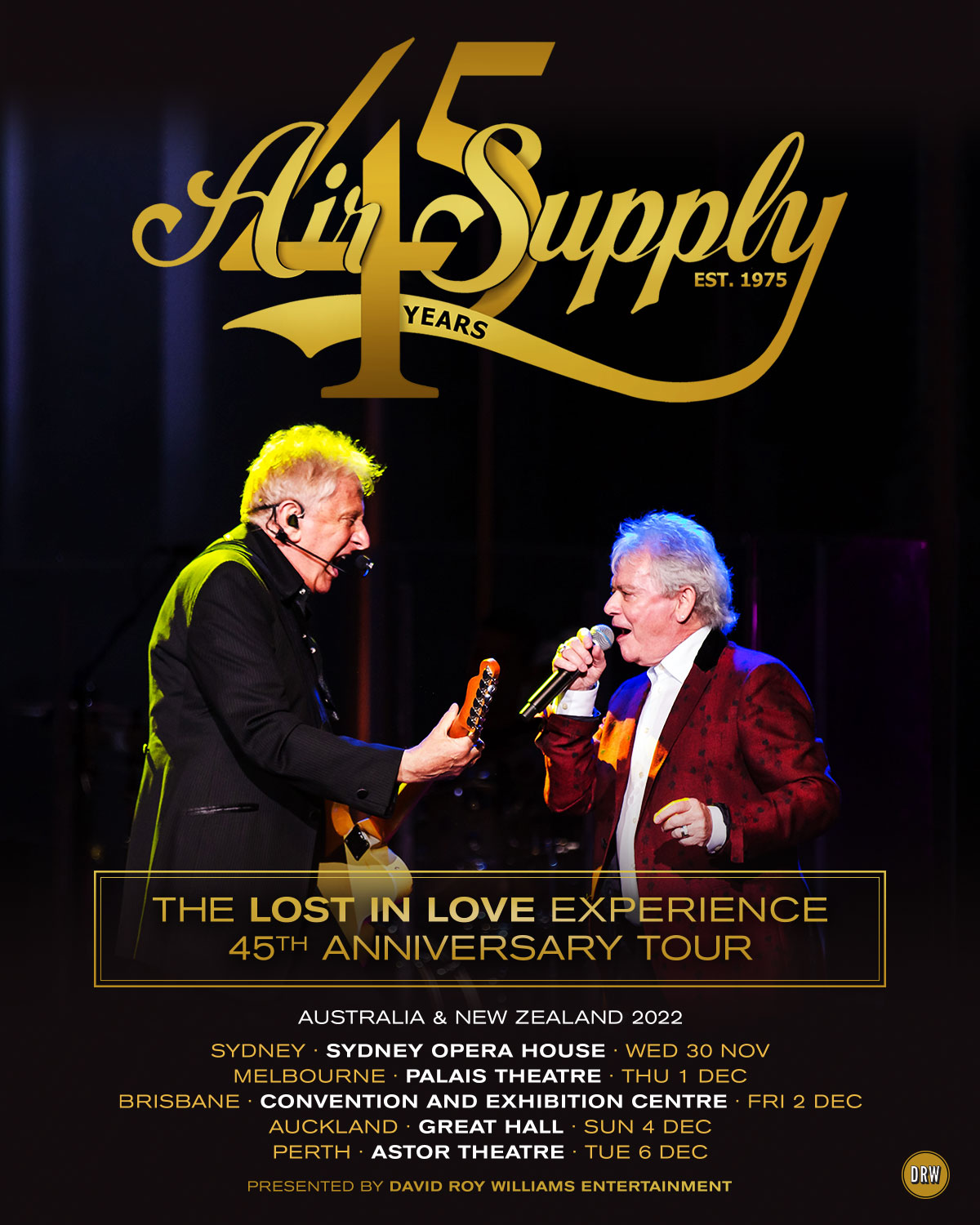 The Lost In Love Experience

After much too long a wait, AIR SUPPLY return to their homeland to perform all-time classics including “Love and Other Bruises”, “All Out Of Love”, “The One That You Love” and of course “Lost In Love”. The Lost In Love Experience is a true celebration of an amazing 45 year career which has seen AIR SUPPLY achieve success after success, with so much amazing music still to come for their staunch legion of fans.

“Making Love Out Of Nothing At All”, “Now And Forever”, “Sweet Dreams”… these are songs that mean so much to so many, and Graham Russell and Russell Hitchcock are joined by their stellar band to present the songs the fans love, in an amazing show that will be one to remember forever.

When “Lost in Love” was released in Australia in October 1976, it quickly soared to the top of the charts, and went on to be named Song of the Year in 1980. Seven consecutive Top-Five singles at that time equalled The Beatles’ run.  AIR SUPPLY’s albums Lost in Love, The One That You Love, Now & Forever, and The Greatest Hits have since sold in excess of 40 million copies.

“It means the world to us to celebrate our 45th Anniversary by performing in our homeland of Australia,” said Russell Hitchcock about the upcoming tour. Added Graham Russell, “On our 45th year as Air Supply, nothing will make us more proud as going back to the place where it all began!”.

Make sure you get your tickets early to witness this spellbinding performance of AIR SUPPLY’s catalogue of wonderful songs – these will be very special nights with some of the most beautiful love songs ever written.

Graham Russell and Russell Hitchcock met on May 12, 1975, on the first day of rehearsals for the Australian production of Jesus Christ Superstar in Sydney. They became instant friends who shared much in common, including their love of The Beatles whom they’d both seen in 1964 in England and Australia respectively.

After the evening performance of Jesus Christ Superstar, they would play in Coffee Bars, Pizza Parlours, and anywhere they could to hone their vocal skills and harmonies. Graham wrote constantly and, with the help of Superstar Pianist Frank Esler Smith, they recorded a few songs on cassette, one of which was “Love and Other Bruises.” After taking these demos to all the major record companies and being rejected by all of them but one — CBS Records — they signed a recording deal.

The album was recorded and mixed in a week and “Love and Other Bruises” was released as the first single and immediately shot to the top of the charts. The name of the group came from a dream Graham had — he saw a billboard with flashing lights all around it and the words “AIR SUPPLY’ in the centre.

The production of Jesus Christ Superstar ended in October 1976 and after only a couple of months, they were invited to open for Rod Stewart in Australia and consequently Rod’s North American tour in 1977. Fifty shows in Canada and the United States in all the biggest venues, including Madison Square Garden in New York and The “Fabulous” Forum in Los Angeles.

Presuming they would be the conquering heroes when they returned home, they were bitterly disappointed to find they had basically been forgotten. After several months of disappointment, Graham wrote several songs, including “Lost in Love” and “All Out of Love.”

“Lost in Love” was released in Australia in 1978 and again soared to the top of the charts. It found its way to Clive Davis, founder, and president of Arista Records, who immediately offered Air Supply a record deal. The song was released in 1980 and became the fastest-selling in the world, topping the charts in a multitude of countries. “All Out of Love” was the second single released and topped the worldwide charts once again.

The trademark sound of Russell Hitchcock’s soaring tenor voice and Graham Russell’s simple but majestic compositions created a unique sound that would be forever known as Air Supply.

In 2013 AIR SUPPLY were inducted into the ARIA Hall of Fame.

*** Supplementary to Covid-19 restrictions in place at the time of the concert, a minimum space of one meter will be maintained between Air Supply