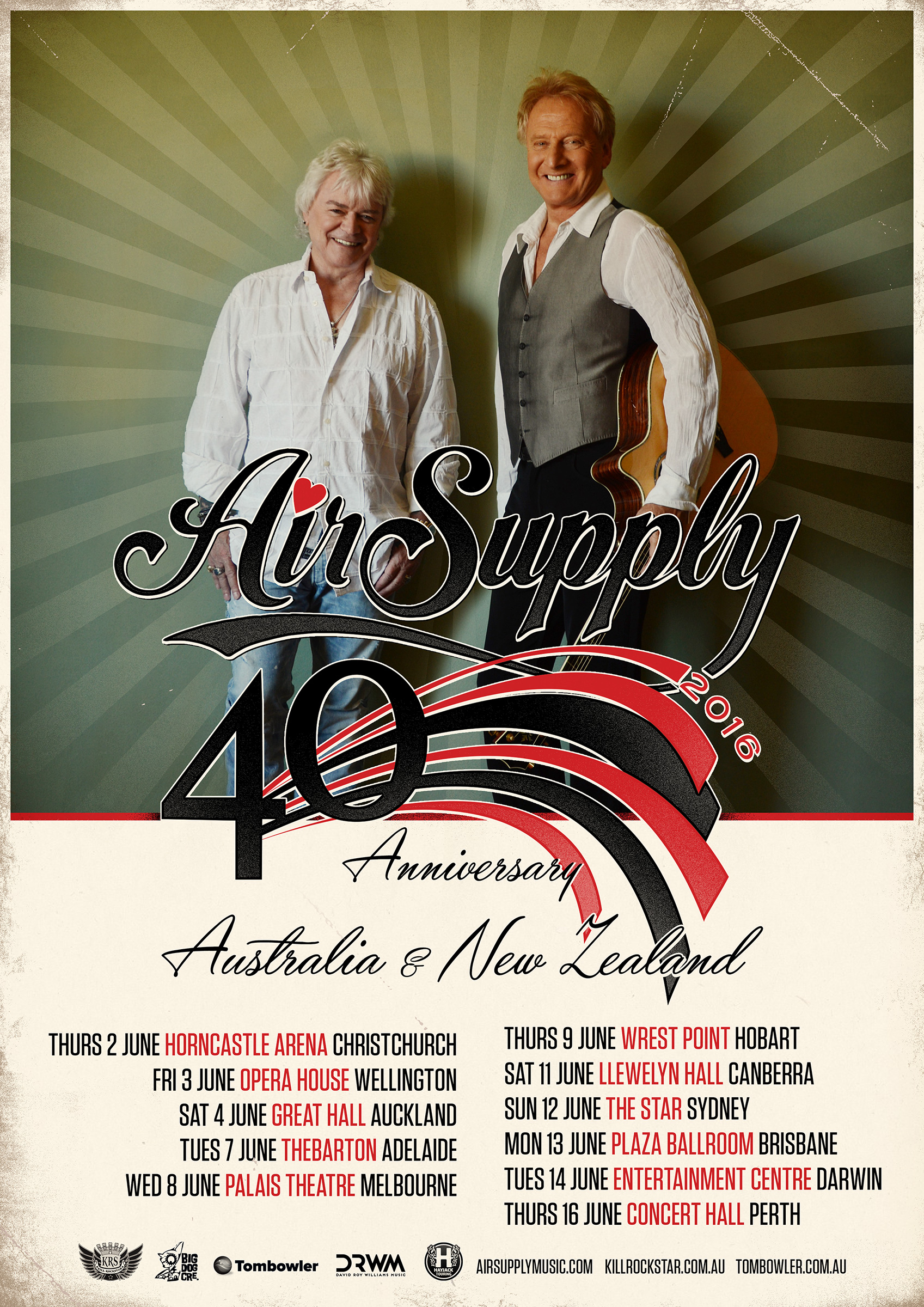 DRWM, Tombowler and KillRockstar are proud to announce Air Supply, one of Australia’s most loved and successful music acts will return to Australia and New Zealand in 2016 for their 40th Anniversary tour.

“It means the world to us to celebrate our 40th Anniversary by performing once again in our homeland of Australia,” said Russell Hitchcock about the upcoming tour. “On our 40th year as Air Supply, nothing will make us more proud as going back to the place where we began!” said Graham Russell.

Graham Russell and Russell Hitchcock met the first day of rehearsals as chorus members in the 1975 Sydney production of Jesus Christ Superstar. They were drawn together through a mutual love of music, singing and The Beatles, when they quickly learnt they had both seen The Fab Four perform in concert in 1964.

It was not long before they became a musical duo and dominated charts in Australia, New Zealand and the world. Clive Davies famously signed them to Arista Records and in 1980 their US domination began. With International hits such as “Lost In Love”, “Love and Other Bruises”, “Now and Forever” and so many more, they became global superstars. Their unique harmonies combined with Graham’s ability to write exceptional songs made them one of Australia’s first and most successful musical exports.

Air Supply’s albums Lost in Love, The One That You Love, Now & Forever, and The Greatest Hits have sold in excess of 40 million copies. “Lost in Love” was named Song of the Year in 1980, and, their singles have sold more than 10 million copies worldwide. “Lost in Love,” “All Out of Love,” “The One That You Love,” “Sweet Dreams,” and “Making Love Out Of Nothing At All” have each achieved multi-million plays on the radio. These songs have stood the test of time and continue to be heard on radio around the world.

In 2013 the duo were inducted into the ARIA Hall of Fame, recognised for their exceptional music and international successes over 40 years. Graham Russell and Russell Hitchcock continue to write and record music. In 2010 they released a new album “Mumbo Jumbo” and the single “Dance With Me” reached the Top 30 Billboard Adult Contemporary charts.   In 2014, they successfully ventured into the dance music scene with their single Desert Sea Sky (remixed by The WideBoys) and I Want You (remixed by Tom Stephan),

Their current single I Adore You is out now.

Tickets will be on general sale from the 22nd February, 2016