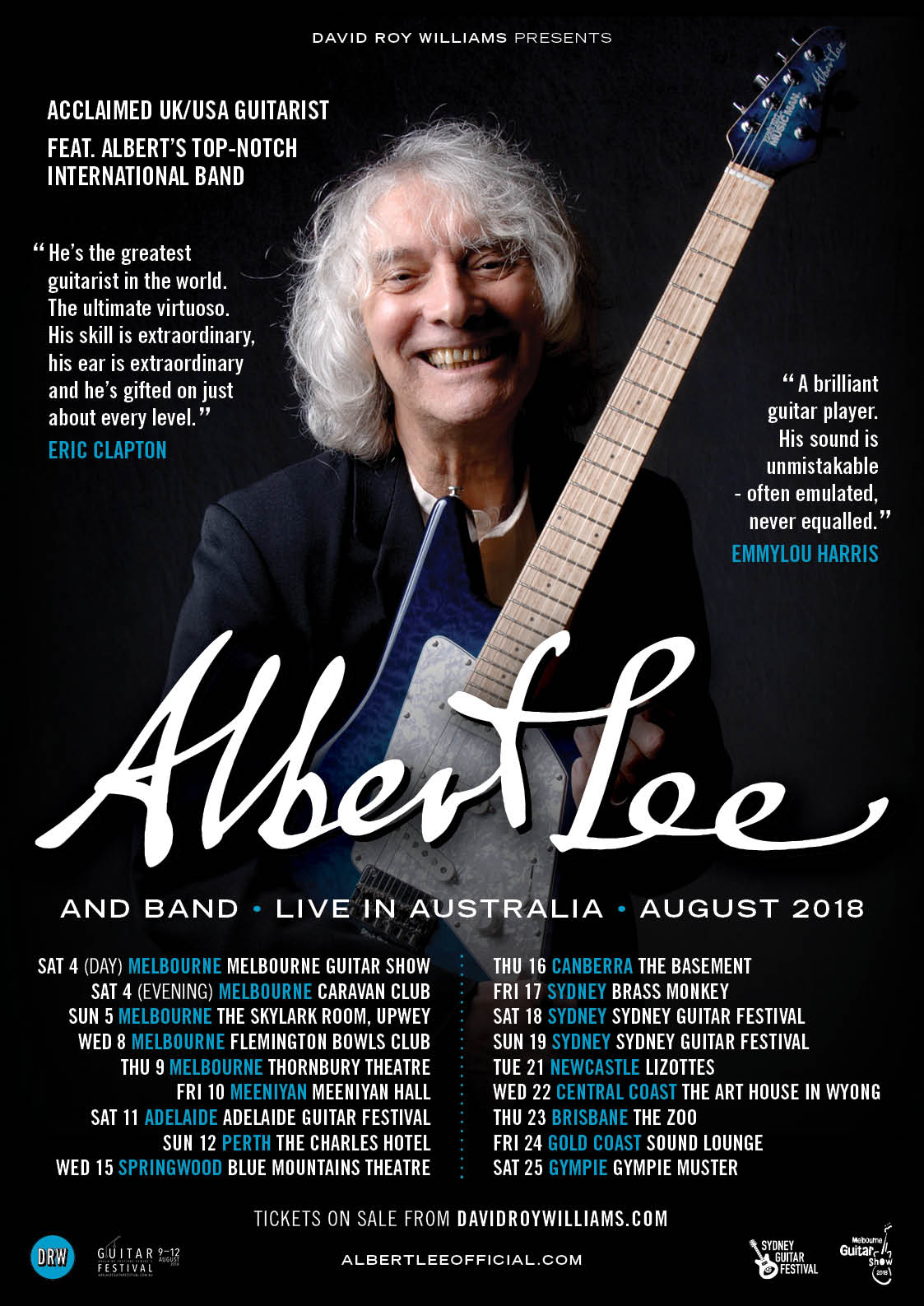 “He’s the greatest guitarist in the world. The ultimate virtuoso. His skill is extraordinary, his ear is extraordinary and he’s gifted on just about every level.” – Eric Clapton

If you tagged along when the blues dragged Rock n Roll into a honky-tonk and started doing shots… you’d be just about primed to witness the extraordinary rollicking prowess of god’s favourite guitarist, Albert Lee.

With a live show that kicks off with a blistering rendition of Fat’s Domino’s “I’m Ready” and makes joyous pit stops for classic tunes by Gram Parsons, Emmylou Harris, Hoyt Axton, Buddy Holly, Jimmy Webb and Ray Charles you can be assured of a sensational night of fabulous music as Albert and his crack L.A. band provide a masterclass in guitar picking rockabilly country via a living history of rock and roll.

“Albert Lee is my hero. It’ll be a very, very long time before there is a guitarist to match Albert’s ability.” – Dave Edmunds

Inspired by Elvis’s guitarist Scotty Moore, British born Lee first displayed his awesome chops trading licks with the likes of Jimmy Page and sharing stages with Deep Purple, Humble Pie and Grand Funk Railroad as part of the fabulous Byrds/ Flying Burrito Bros inspired Heads Hands & Feet, before departing his homeland for the USA where he recorded three albums as a member of The Crickets, and then joined Joe Cocker at his peak. In 1976 Albert become part of Emmylou Harris’s Hot Band alongside Ricky Skaggs and Rodney Crowell.

In 1978 Albert commenced a five-year stint with Eric Clapton and in 1983 encouraged the Everly Brothers to get back together, acted as their musical director and went on to play regularly with them over the next twenty years.

In 2002 the man known as Mr. Telecaster shared the stage with Paul McCartney at the Concert For George and won a Grammy Award in the same year for a performance with bluegrass icon Earl Scruggs. Albert appeared at Eric Clapton’s Crossroads Guitar Festival in 2007, 2010 and 2013.

It’s been nearly a decade since Albert Lee last brought his beloved Ernie Ball Music Man guitar to Australia but he’s making up for it in 2018 with shows across the country including appearances at the Adelaide Guitar Festival, The Melbourne Guitar Show, the Sydney Guitar Festival and the Gympie Muster.

Don’t be the one that hears it from a friend how fabulous the show was once it’s all too late.

As Emmylou Harris said: “When Saint Peter asks me to chronicle my time down here on earth, I’ll be able to say (with pride if that’s allowed) that for a while I played rhythm guitar in a band with Albert Lee.”