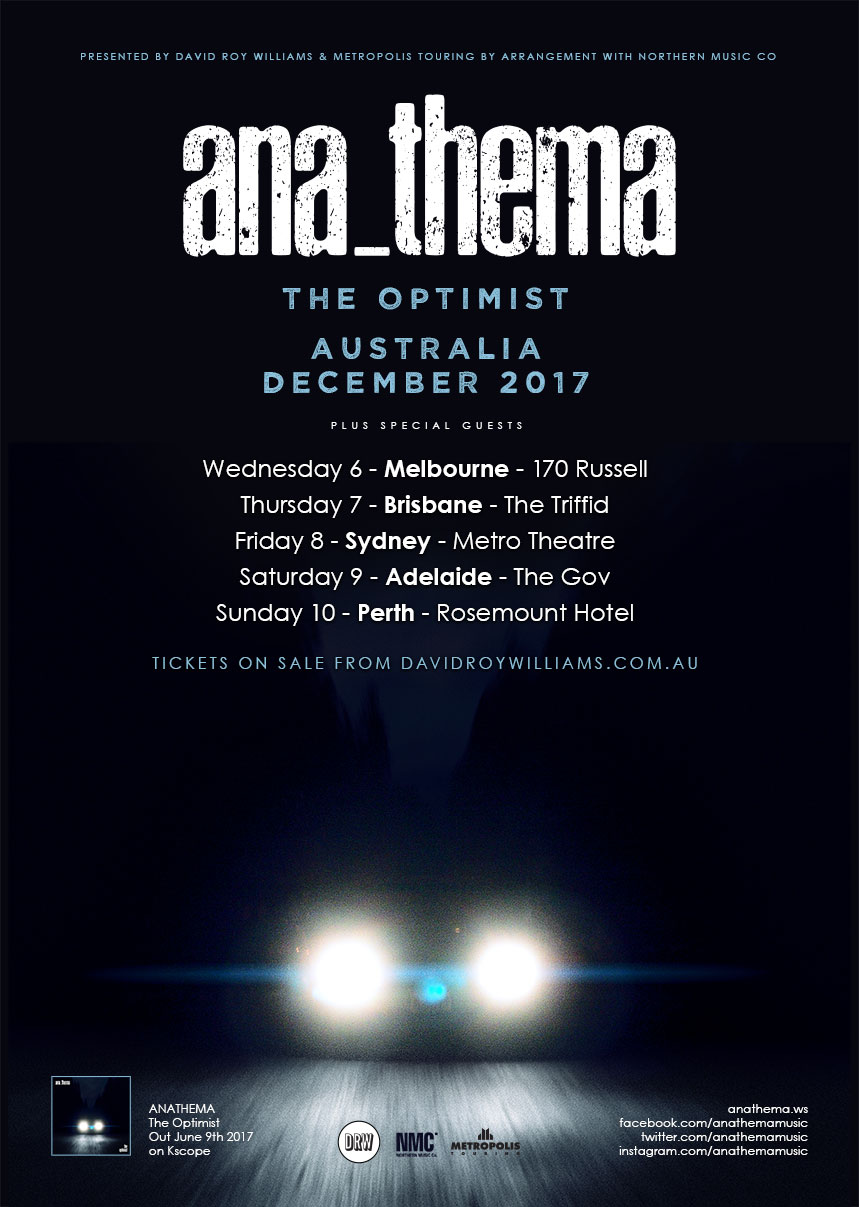 Stargazing post-progressive rockers ANATHEMA return to Australia this December to celebrate the release of their highly anticipated 11th album The Optimist. Following their celebrated stripped down shows of 2015, ANATHEMA are bringing their full electric show to blast the cobwebs out of the rigging.

“… inspiring, ultimately making you feel like you don’t need to see another gig, because everything else would end up being a disappointment” Classic Rock

Known for their ability to send audiences into raptures, Anathema build on the most soul-baring and introspective forms of artistic expression to deliver mesmerising performances. Theirs is a live experience like no other, and one which rightly earned them the award for Best Live Event at the inaugural Prog Music Awards late in 2013.

“The dual vocals of Vincent and Lee reach for the rafters building to a massive emotive crescendo. It’s enough to make a grown man cry. Let’s face it, Anathema are at the top of their game right now.” Metal Hammer

Alongside forward-striving acts such as Opeth, Steven Wilson and Dream Theater, Anathema present an experience both brutal and ethereal. This is a band that has forsaken all notion of expectation – highly evocative music simply pours out of them. With the new June released album, The Optimist Australian Tour is an unmissable chance to pulsate to all your favourite tracks and be amazed by highlights from the dazzling new album. The Optimist live is a journey full of wonder with every song carrying a kaleidoscopic spell of its own.

“With a powerful brand of cinematic classic rock, the band delivered blast after blast, with Lee Douglas’ vocals remaining a striking highpoint of the set, and their raw performance leaving an atmosphere of almost literal jaw-dropping awe.” Mentioned Reviews

Anathema have continually evolved by placing hope in the future, and with undoubtedly The Album of 2017 under their belts, it definitely seems to be working. Theirs is a name built on the most soul-baring and introspective forms of artistic expression. Rightfully so, Anathema’s shooting star looks set to burn perpetually brighter and brighter. Get ready for an intense and emotional live experience that you will never forget!