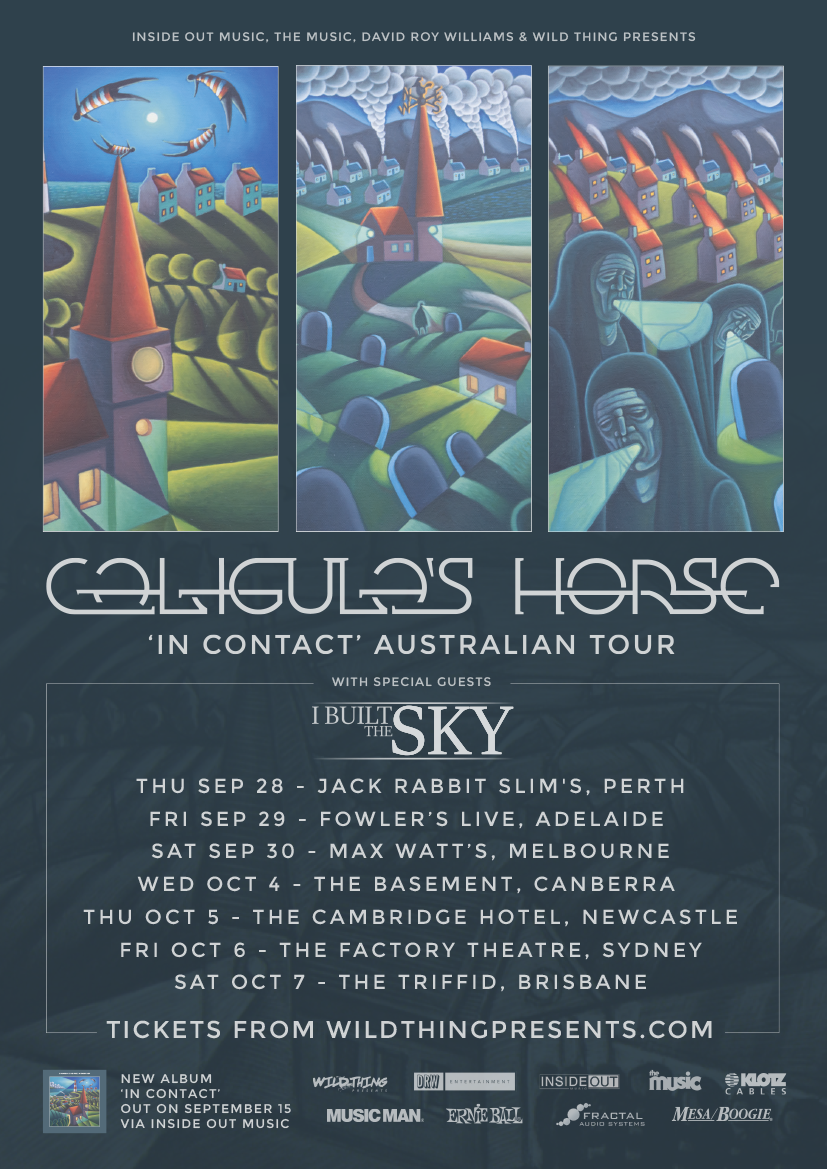 Caligula’s Horse, a band at the forefront of Australia’s progressive rock scene, will hit the road for a national tour over September

and October in support of their new album In Contact, to be released on September 15 through Inside Out Music.

Hailing from Brisbane, Caligula’s Horse is a progressive alternative rock powerhouse. Their unique tapestry of progressive metal laced with raw rock power is at once fluid, monumental, and striking, offering a wide audience a broad palate of unforgettable moments and timeless music.

Their fourth record, In Contact, is an immense conceptual work discussing the nature of art and creativity, a celebration of what

connects us as human beings – the shared space across our many differences. Told over four separate chapters, it is an album full of deeply personal stories, characters with their own bittersweet hope and tragedy. This album is yet another leap forward for Caligula’s Horse – steeped in their now-signature ambitious and colourful sound but with a new-found ferocity, In Contact will leave audiences breathless.

In Contact stretched all of the band’s abilities, from the frantic speed and complexity of ‘Will’s Song (Let the Colours Run)’ to the immense scope and variety of the 16-minute album closer, ‘Graves’. T
his is Caligula’s Horse at their most ambitious and progressive.

“In Contact has been an enormous proposition – the stories told in this album feel deeply personal, and we’ve never been more excited to share a new work with the world. The sounds on this album are dark and adventurous – but without losing the bittersweet and joyful sounds we developed in writing Bloom.” – Vocalist Jim Grey

The band are currently on tour throughout Europe, including support slots with Opeth, Anathema and Pain Of Salvation, UK headline shows and festival appearances at Midsummer Prog Festival (Netherlands) and Be Prog! My Friend Festival (Spain). To coincide, Inside Out Music reissued the band’s first two albums Moments From Ephemeral City and The Tide, the Thief & River’s End worldwide.

Caligula’s Horse will be in lethally potent live form on return to Australian shores, with their ‘In Contact’ tour seeing them return to all the major cities – after selling out many of them during 2016. Following their recent Australian tours with Opeth and sleepmakeswaves, these will be Caligula’s Horse’s only Australian headline shows for 2017.

Following on from 2015’s globally praised album Bloom, In Contact will bring the music of Caligula’s Horse to more people than ever before. An Australian progressive treasure, and on their way to becoming one of the world’s leading rock acts, don’t miss out on catching the mighty Caligula’s Horse on their ‘In Contact’ Australian tour!