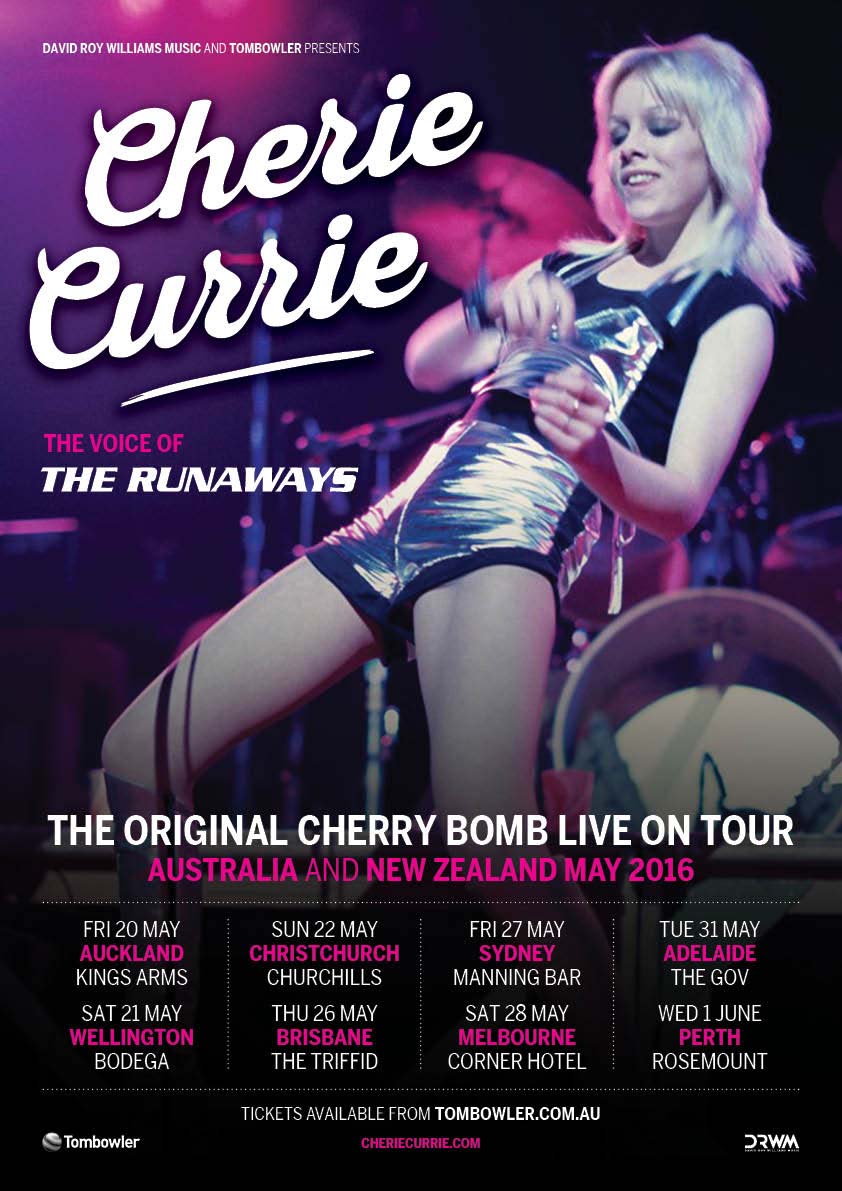 What do you get when you put 5 teenage girls together with a crazy pop Svengali? … MAYHEM!

The Runaways burst onto the scene in 1975 with a 15 year old Cherie Currie out front screaming the instant classic “Cherry Bomb”!

“The crowd continued to jump and dance… It was seriously hard to find stable ground because the floor was bouncing so hard. Currie’s voice resonated all over the building and out into the streets. The party didn’t stop all night.” Rockonphilly.com

The Runaways created a sensation wherever they appeared and quickly catapulted from playing small clubs to selling out major stadiums—headlining shows with opening acts like the Ramones, Van Halen, Cheap Trick and Blondie.

The band’s 2nd album featured the call to arms hit “Queens Of Noise” and Cherie’s bandmate Joan Jett’s “I Love Playin’ With Fire”.

“… she is kick-ass ready to ROCK again and proved it!” reallifehusband.com

The Runaways were riding a wave of out-of-control international touring, hit singles (including “Heartbeat” and Lou Reed’s “Rock and Roll”), and platinum albums. But the rollercoaster started moving too wildly about on the rails for Cherie who departed the band and released her first solo album at the age of 18.

Cherie recorded a number of albums with her twin sister Marie and later embarked upon a film career including roles in Foxes (alongside Jodie Foster), Parasite (which featured a young Demi Moore in a supporting role), and Steven Speilberg’s Twilight Zone, The Movie.

“When Currie hit the stage it was like she never missed a beat. She was on fire with the spirit of rock and roll and I was in heaven. You can’t fake this stuff – you either got it or you don’t – and Currie’s got it in spades.” Real Rock Report

In 2010 Dakota Fanning portrayed Currie in The Runaways, a biographical drama film executive-produced by Joan Jett and based on Cherie’s own memoir, Neon Angel, which recounted life in the band and Cherie’sr traumatic experiences with drug addiction, sex abuse, and her broken family. Cherie also appeared in the documentary Edgeplay, a documentary on her former band, produced by former Runaways bass guitarist Vicki Blue.

As well as performing on stage, Cherie is also a wood-carving artist, using a chainsaw to create her works. She opened her own gallery in California in 2005.

“How often do you get the chance to watch a bona fide legend down your local boozer? Cherie takes to the stage walloping straight into “American Nights” from Runaways’ debut, album. That incredible voice is still as strong as ever and she looks a million dollars at 56 years of age.” Gigslutz

Cherie’s released a new solo album, Reverie, in 2015 which features appearances from ex-Runaway’s bandmate, Lita Ford and the final production work by former manager Kim Fowley. Recent live setlists include “American Nights”, “Is It Day Or Night”, “Heartbeat”, Queens Of Noise”, “California Paradise”, “Midnight Music” (all The Runaways), Lou Reed’s “Rock and Roll”, “Do You Love Me” by Kiss and David Bowie’s “Rebel Rebel”.

Cherie and her new band recently popped their proverbial “Cherry” with an exclusive 8 show tour of the U.K. that ended up selling out in many of the major markets including London. The Runaways never made it downunder, so don’t miss seeing the original “Cherry Bomb” for Cherie Currie’s first ever Australia and New Zealand tour.

“Currie came across like a panther let out of a cage… Currie amazingly looked every bit the vixen at 50 that she was at 15. She still has the vocal chops – Currie truly owned the stage.” Newwaveego blogspot