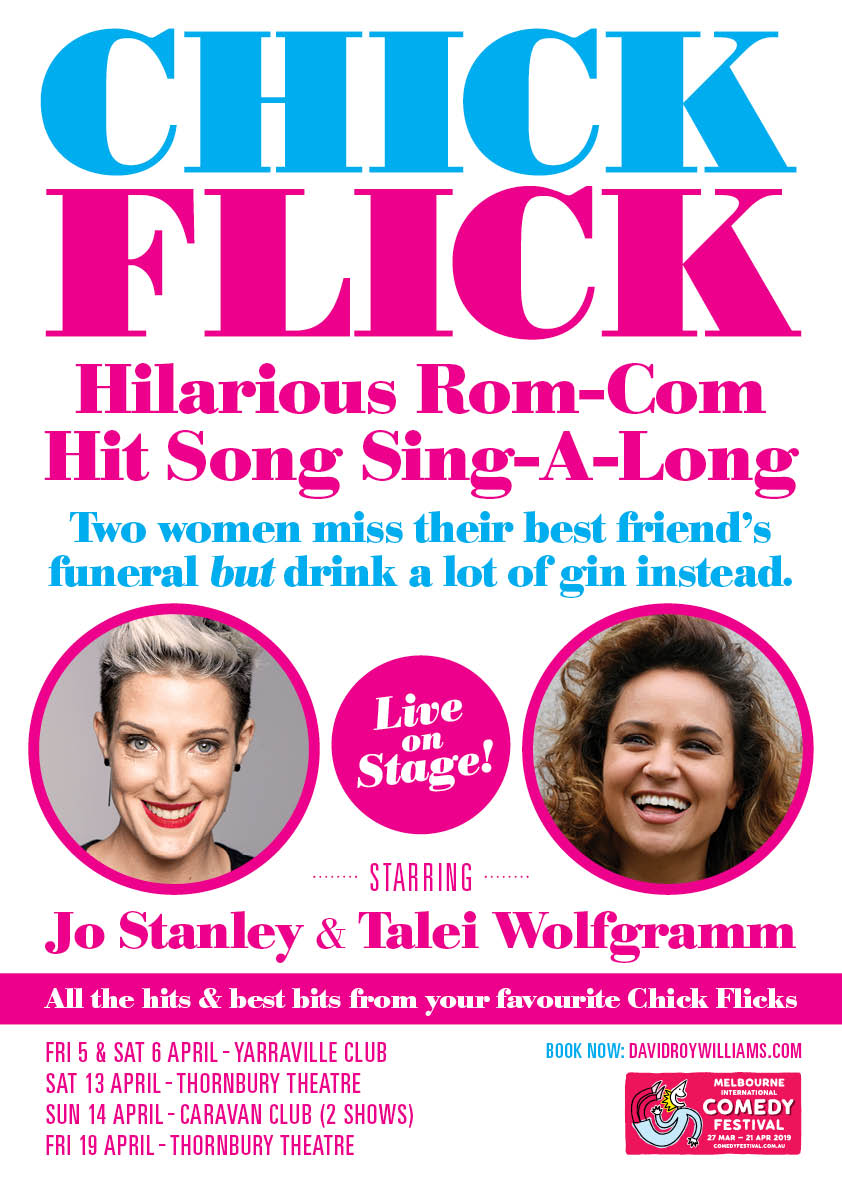 An original story of 2 Friends, 1 Hotel Room & a bottle of Gin

Two women miss a late-night final flight to a girlfriend’s funeral and share a hotel room for the night. They drink a lot, laugh a lot and watch chick flicks, as their friend would’ve wanted. Things get messy, secrets are exposed & they sing the best songs from the best chick flicks ever!

This boisterous laugh out loud (and sing out loud !) stage show ranges from tears of sadness to tears of sheer joy as our heroines dig deep into Pretty Woman vs The Bodyguard, Drew Barrymore or Sandra Bullock, and whether Dirty Dancing or The Notebook features the most incredible ending ever. Basically, we’re talking the best girls only night out (or in) ever!

Jo Stanley (FOX FM, GOLD FM) and Talei Wolfgramm (The Wolfgramm Sisters, RocKwiz, Paul Kelly) star in this outrageous evening of laughs and sing-a-longs including classic rom-com songs such as “I Will Always Love You”, “Pretty Woman”, “When You Say Nothing At All”, “Shoop Shoop Song”, “Love Is All Around”, “Don’t You Forget About Me” and “Time Of My Life” among many others.

Bring your girlfriends along and join Jo and Talei for a laugh and a sing and if you do accidently snort your drink out your nose, well hey, you won’t be alone.

Jo Stanley began her performing career as a stand-up comedian, appearing in her first Melbourne International Comedy Festival in 1992. After a detour that took her through 14 years of number 1 breakfast radio shows, sharing way too much information and interviewing international superstars, Jo returns to the stage for the MICF with this hilarious new show.

Jo is a comedian, writer, author, actor and presents with an impressive CV of radio and television hosting appearances with the aim of being honest, smart and funny.  She writes for the Sunday Life magazine and is the creator of the Play Like A Girl book series for young readers.

Jo is passionate about mindfulness, and is a fierce advocate for gender equality. She loves her husband Daz, her daughter Willow and the Collingwood Football Club, but don’t hold that against her.

Talei Wolfgramm has been performing with her sister Eliza as The Wolfgramm Sisters for over a decade and released a self titled album.

Talei has also toured with Australian Legends and International One-Hit-Wonders for the Countdown Arena Spectacular shows and performed at the MCG for the AFL Grand Final series.