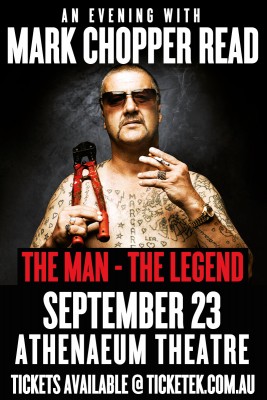 An Evening with MARK “CHOPPER” READ

the man – the legend

Live on Stage at the Athenaeum

“I’ve killed between four and seven people… If I hadn’t gotten them they certainly would’ve gotten me. That’s the way I look at it.” – Mark ‘Chopper’ Read

Mark ‘Chopper’ Read is an Australian folk hero – a Ned Kelly for the modern era. Quick-witted and unapologetic, he is the world’s most popular psychopath; a living legend who graduated from the school of hard knocks and turned into a media star.

But who is the real Chopper Read?

Mark’s story is about a troubled kid who started out on the wrong path then descended into hell. It is about a youth of aimless crime, brutalisation in a violent prison system, a surreal and unexpected left turn to celebrity, and the quest to find a place in the regular world.

Some worship Chopper for his violent past, others deride him as an opportunistic lowlife who has profited from his crimes. Some say he’s a monster, others say he’s a top bloke. A threat to society or a victim of the system. The truth lies somewhere in between.

Here is the chance, perhaps for the last time, to hear Chopper’s life story direct from the source – live on stage.

“Apart from Irish whiskey, good cigars, Pontiac motor cars, and a pistol grip baby .410 shotgun with solid load shells, what I love the most is kidnapping smartarse gangsters and taking their money. To the human filth I have bashed, belted, iron barred, axed, shot, stabbed, knee capped, set on fire and driven to their graves, I can only quote from the motto of the French Foreign Legion, ‘Je Ne Regrette Rien’ … I REGRET NOTHING.” – Mark ‘Chopper’ Read