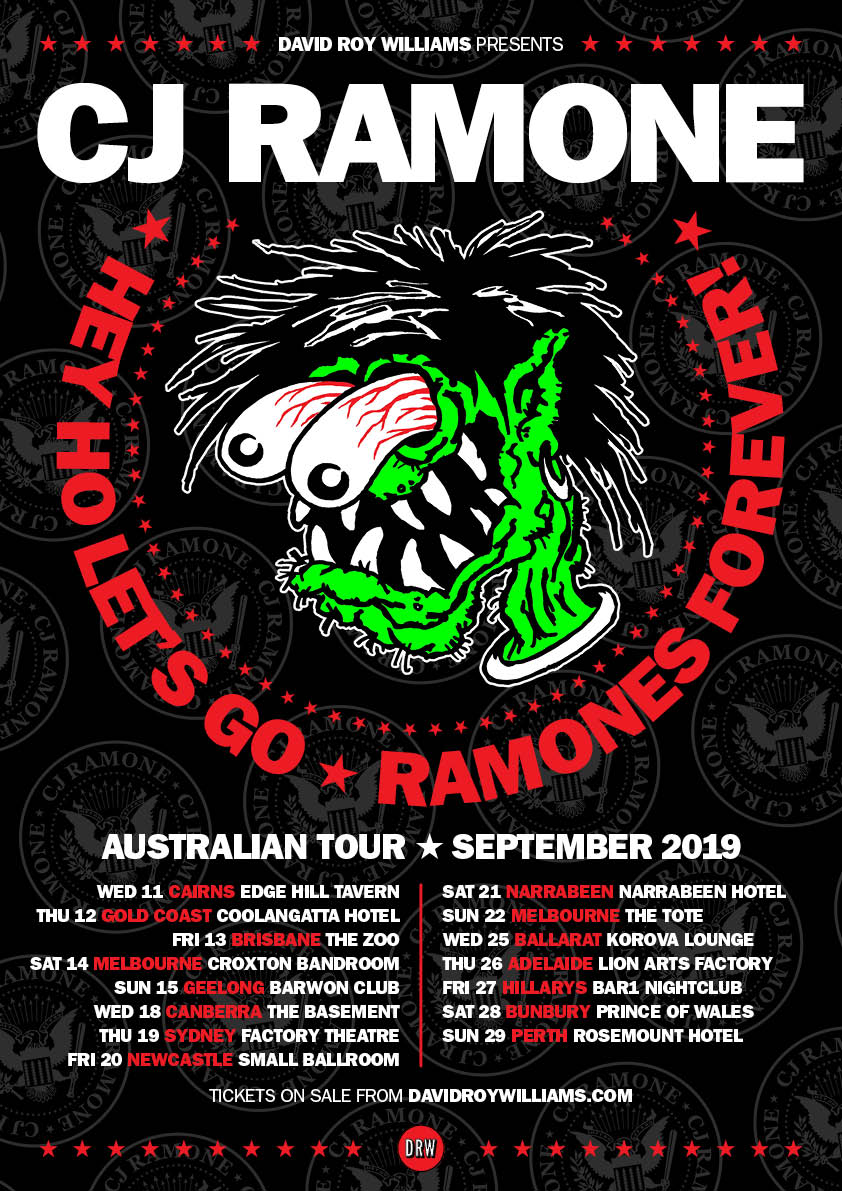 I Wanna Be Sedated/ Judy Is A Punk/ Rockaway Beach/ Sheena Is A Punk Rocker/ I Wanna Be Your Boyfriend/The KKK Took My Baby Away/ Baby I Love You/ California Sun/ Cretin Family/ Psycho Therapy/R.A.M.O.N.E.S./ The Crusher/ Glad To See You Go / Blitzkreig Bop

CJ RAMONE, fresh from headlining this years’ annual Joey Ramone Birthday Bash, takes the baseball bat to Australian venues this September. One of the last few surviving punk rockers blessed with famous Ramones sobriquet (and the only who wasn’t behind the drumkit), CJ is bringing his killer band of cretins for a guitar crushing session of psycho therapy!

“His set was full of Ramones’ classics, ‘The KKK Took My Baby Away’, ‘Sheena Is A Punk Rocker’, ‘California Sun’ and this reviewer personal favourite ‘I Wanna Be Sedated’. The crowd sang along like each song was a national anthem and to some people they probably are.” The Dwarf

*no meet and greets tickets for this show.

Make no mistake, you are NEVER going to hear the Ramones songs done better than CJ RAMONE does them. If you missed the Ramones – or just miss them – this is the show you need to see.

“CJ and his band were clearly having a ball on stage. This wasn’t about a pay check, this was about a love of music, punk rock and The Ramones. I loved every second of it. Incredible!” Colin’s Punk Rock World.

THE RAMONES– like AC/DC, like Motorhead – are true and singular rock icons; a band whose music became its own genre; a band who influenced every other band who ever smoked an amp in their wake. And in the Ramones case it wasn’t just subsequent punk bands from The Sex Pistols to The Buzzcocks to The Misfits to Bad Religion to Green Day to The Living End – it was also hard rock/metal bands. Metallica, Guns N Roses, Pearl Jam, even Kiss – they all love the Ramones, and were influenced by their energy, economy and simplicity. It’s no surprise that Epitaph Records tried desperately to sign the band following the success of The Offspring in the early ‘90s, just as it’s no surprise that the Ramones’ iconic logo has become one of the most ubiquitous designs in street wear and fashion over the last decade.

CJ RAMONE wasn’t an original member – sadly, none of the originally four are still alive – but replaced Dee Dee Ramone as the bass thumping heart and soul of the Ramones. 23-year-old CJ rose to the occasion, never letting Dee Dee’s 1-2-3-4 energy flag for a moment and bringing never-say-die enthusiasm to the band when it needed it most. The late and great Tommy Ramone meant it when he thanked CJ for “keeping the band young” at the Ramones’ Rock’n’roll Hall of Fame induction in 2002. CJ was with The Ramones (and post Ramones band The Ramainz featuring Dee Dee and Marky) for a decade and played on the band’s final three studio albums, Mondo Bizarro, Acid Eaters and Adios Amigos. His presence is clearly felt and heard on all three via his powering bass, a handful of lead vocals on each, and original tunes. CJ also appeared on the live albums Loco Live, Greatest Hits Liveand We’re Outta Herewhere he can be heard singing Dee Dee’s songs.