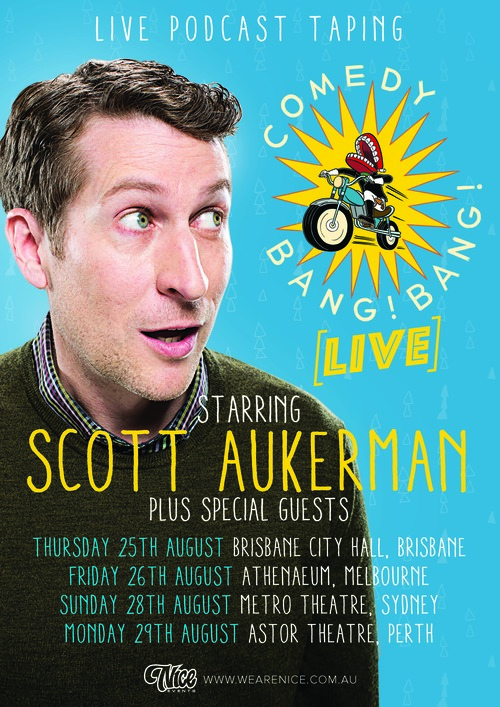 Comedian Scott Aukerman is coming to Australia with his Comedy Bang! Bang!

Comedy Bang! Bang! – the hit comedy podcast and US TV Show starring comedian Scott Aukerman is coming to Australia for the first time on tour.

Comedy Bang! Bang! Started in 2009 as a weekly podcast that blends conversation and character work from today’s funniest comedians.  Hosted by writer and comedian Scott Aukerman, it features an assortment of guests and regular segments.  Over the years, guests have included Paul F. Tompkins, Aimee Mann, Jon Hamm, Ben Stiller, Seth Rogen, and so many more.. a who’s-who of funny people and celebrities.

In 2012, Comedy Bang! Bang! Also became a TV show – hosted by Scott Aukerman and, as of 2016,  featuring Weird Al Yankovic as ‘Band Leader’ – a role that was previously converted by Reggie Watts and Kid Cudi.  The TV show is an extension of the podcast and again features a plethora of famous faces, funny people and engaging funny content.  The TV Show has been broadcast on SBS2 in Australia.

Scott Aukerman is an American actor, comedian, writer, producer and producer.  He began his comedy career as a writer and performer on Mr. Show, which received an Emmy nomination for its writing in 1999.   Following the success of Mr. Show, Scott co-founded the popular live show ‘Comedy Death-Ray’ that would later become Comedy Bang! Bang!  One of Scott’s most well known ventures is the FunnyorDie series Between Two Ferns with Zach Galifianakis, which he co-created and which received international acclaim when Zach Galifianakis interviewed Barrack Obama.  The episode amassed over 48 million views.  Aukerman directed and produced this episode, which won the 2014 Emmy Award for Outstanding Short-Format Live-Action Entertainment Program. He won again in this category the following year for the episode featuring Brad Pitt.

Scott and a merry troupe of special guests & performers is coming to Australia for the first time in this LIVE theatre show –bringing all the fun and laughter that has made this show one of the cult comedy hits of the internet and television.

Comedy Bang!Bang! Podcast can be accessed via Itunes and https://www.earwolf.com/show/comedy-bang-bang/