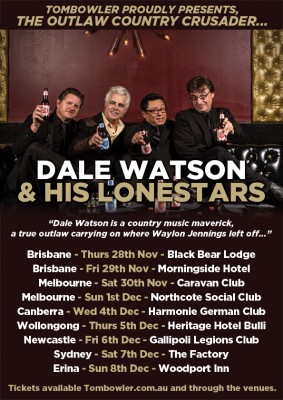 Dale Watson is a country music maverick, a true outlaw carrying on where Waylon Jennings left off. A member of the Austin Music Hall of Fame, he stands alongside Waylon, Willie Nelson, and George Strait as one of the finest country singers and songwriters from the Lone Star State.  Dale has established himself as one of the forerunning crusaders against the “Nashville Rash” that has been plaguing the country music industry.  He also championed his own genre of original music called “Ameripolitan”, a genre Dale Watson describes thus: “Americana is original music with prominent rock influence, Ameripolitan is original music with prominent ROOTS influence.”

This year has seen Dale Watson release his 21st album, El Rancho Azul which was recorded at Willie Nelson’s Pedernales Studio in Austin to critical acclaim. This 2nd album on Grammy Award Winning Label Red House Records follows hot on the heels of his classic The Sun Sessions, which was recorded at the fabled Memphis studio and evokes the era of Johnny Cash, Elvis, and Carl Perkins.

Following an appearance on Letterman and shows appearing alongside Dwight Yoakam and Old Crow Medicine Show, the man who embodies what country is, was and should always be, has been keeping himself pretty busy.

With fans like Willie Nelson, and comparisons to Waylon Jennings and Red Simpson Dale Watson and His Lonestars follow in the footsteps of the early country stars but with a distinctive style and sound all their own. Tattooed and always dressed to the nines, Dale is a true entertainer, mixing humour and pathos into his lively shows.