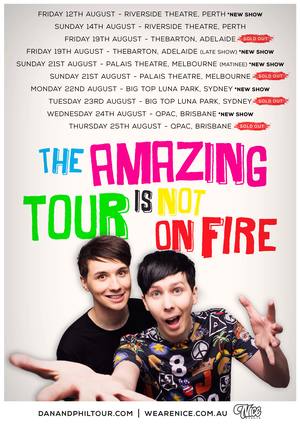 The biggest EVER YouTuber tour comes to Australia This August!

Following the release of their New York Times, London Times and Amazon number 1 book ‘The Amazing Book Is Not On Fire’ and off the back of a sold out 24-date UK tour and 43-date US tour, Dan & Phil will bring The Amazing Tour Is Not On Fire to Australia in August.

The Amazing Tour Is Not On Fire is a full-scale theatrical stage show with hilarious anecdotes, sketches, lots of audience interaction that the guys will probably regret, a story tying it all together and some SURPRISES that audiences will never see coming. Dan and Phil are relatable, heartfelt and hilarious. Their struggles and success haven’t changed their strong friendship or their core belief that it’s okay to be weird. This is The Amazing Tour is Not on Fire!

In collaboration with a young and energetic West End theatrical production team from London, Dan & Phil have produced a groundbreaking spectacle that will surprise and delight fans of all ages!

Dan and Phil say: “We’re so incredibly excited to come down under and perform our show for all our Aussie followers! Phil is going to be wearing SPF 1000 and Dan will be staying inside to avoid giant insects”.

Director Ed Stambollouian says: “Dan and Phil have been such a joy to work with on this project and their commitment to the work is unparalleled. They’ve given their ‘all’ to this show: every word, every reference, every pixel; it all comes from them! They have an incredible sense of togetherness with their fans, who are so supportive – and very very loud!“

Since uploading their first ever videos aged 18 and 19, Dan & Phil have become two of the world’s biggest YouTube stars. Their large and loyal fanbase love their observations on the internet, awkward anecdotes and home life as flatmates in London.  In September 2014, the boys launched a gaming focused YouTube channel ‘DanAndPhilGAMES’, and promptly gained 700,000 subscribers in 24 hours – the fastest channel launch ever on YouTube.

Dan and Phil were the first YouTubers to have their own show on BBC Radio 1, for which they won a Radio Academy Award in 2013.

Dan and Phil have also presented the online coverage of the BRIT Awards for the past 3 years, reaching over 7 million viewers.

At the end of 2014 Dan & Phil lent their voices to cameo characters in Disney’s hit movie ‘Big Hero 6’, which went on to become the 3rd highest grossing Disney animation of all time and win the Academy Award for Best Animated Feature.

Their debut book ‘The Amazing Book is Not on Fire’ soared to the top of book charts around the world in 2015 and following a sold out UK tour and US tour, they are excited to cross the ocean and conquer Australia.