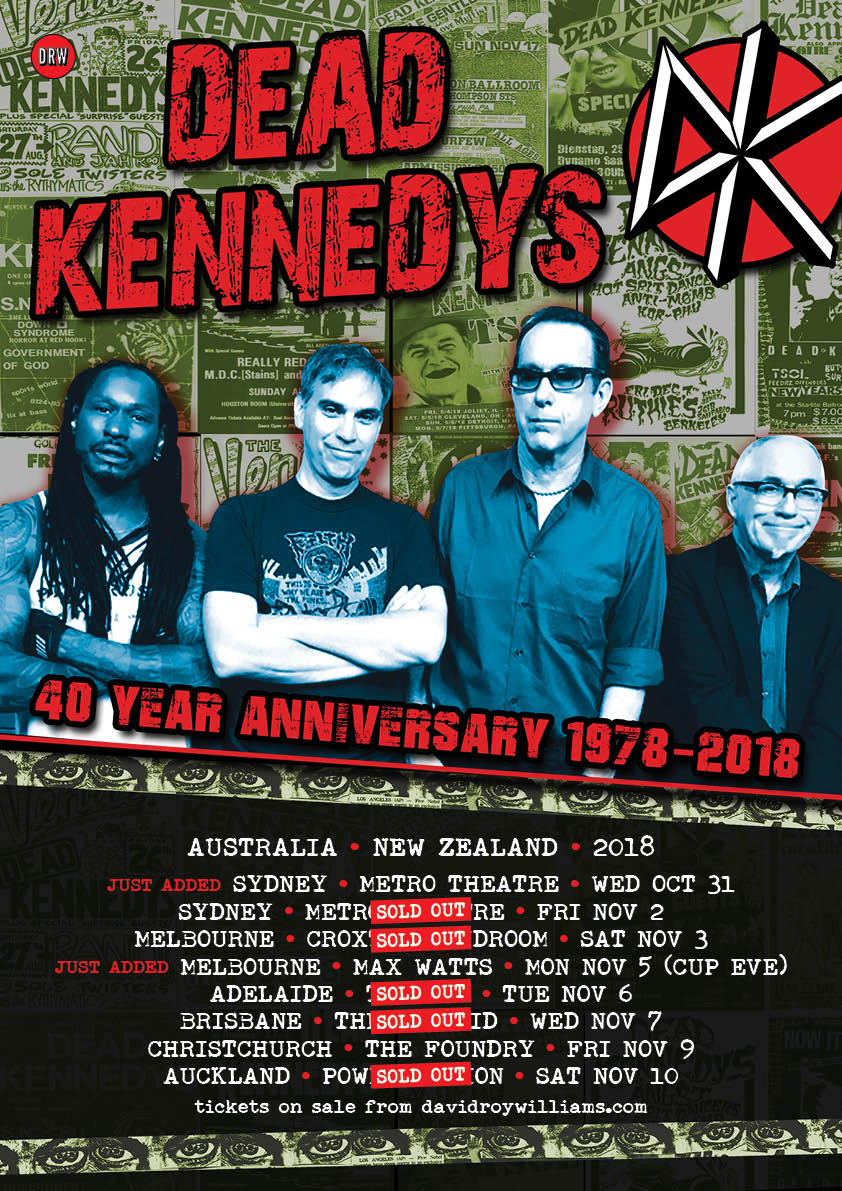 Other shows will sell-out. No further shows to be added!

American punk legends Dead Kennedys have announced second shows in both Sydney and Melbourne following the quick sell out if their first shows in each city. The new shows are Wednesday October 31 at the Metro in Sydney, and Monday November 5 – Cup Eve – in Melbourne. There will be no further shows added to the tour, and all other shows around the country are on-track to sell out.

Tickets for the two additional shows will go on sale Midday Friday September 7.

The songs are as unforgettable as the band’s name, and fans will hear them all when American punk icons Dead Kennedys return to Australia and New Zealand in November.

40 years since they formed, and 35 years since they first toured Australia, Dead Kennedys remain an over-the-top live act guaranteed to cause chaos at every show. Back in the beginning, they were the first West Coast American Punk act to make an international impression, and the only one to impact in the UK, where they hit the Top 40. They were hugely influential on the broader Australian alternative scene at the start of the ‘80s, with their early single “Holiday In Cambodia” and first album “Fresh Fruit for Rotting Vegetables“ selling by the truckload, and the subsequent single “Too Drunk To F***” becoming news when it was banned. Dead Kennedys prompted police raids here and a level of outrage that surpassed even that aimed at the Sex Pistols half a decade earlier.

The band’s provocative name became synonymous with punk throughout mainstream society, and their first Australian tour, in ’83, provoked riots and arrests.

The DK’s opened the door for other American bands including the likes of MDC, Bad Brains and Black Flag, and inspired a thriving local punk scene in Australia. In turn their full-on sound, anti-establishment politics and sense of humour became fundamental inspiration for generations of skate and surf punks and massively popular bands including the Offspring and Green Day in the US and locals Frenzal Rhomb and the Living End.

In Australia, the run of albums that followed “Fresh Fruit” – “In God We Trust, Inc”, “Plastic Surgery Disasters”, “Frankenchrist”  and “Bedtime for Democracy” – sold by the thousand at a time when punk had yet to break into the mainstream, and kept selling big numbers for decades.

Still defined by the instantly identifiable and hypnotic guitar of  East Bay Ray and their rallying anti-authoritarianism and political bite – things which are perhaps more vital than ever in this crazy world – Dead Kennedys remain a band not to be missed.