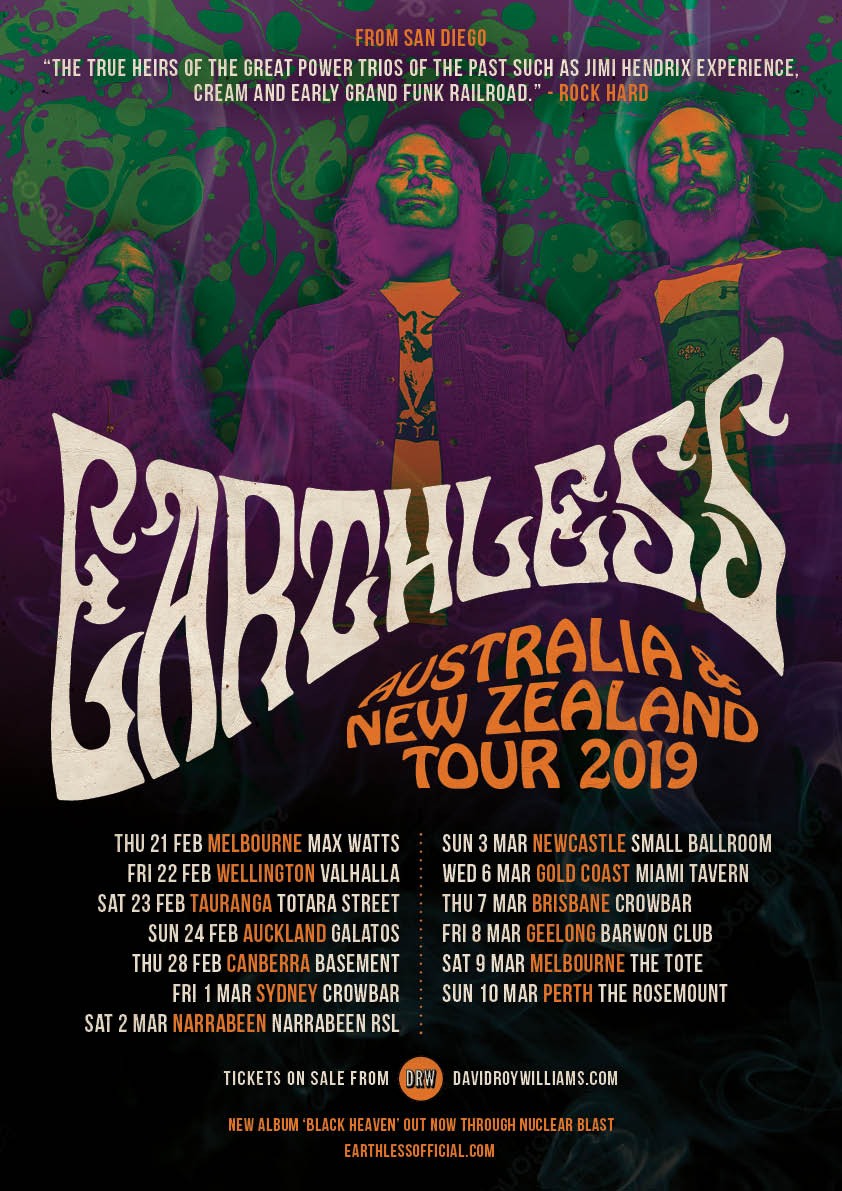 EARTHLESS TO RETURN TO AUSTRALIA & NEW ZEALAND IN FEB/MARCH 2019

Due to unforeseen circumstances Earthless’s Tuesday night show in Wollongong has been cancelled. Ticket holders will be contacted by Moshtix in regards to refunds.

California psychedelic heavyweights Earthless will return to Australia and New Zealand next February and March in support of their acclaimed 2018 studio album Black Heaven and their new live album From the West.

Comprised of singer/guitarist Isaiah Mitchell, drummer Mario Rubalcaba and bassist Mike Eginton, Earthless have previously toured down under four times; the last time in 2015. In the intervening years, the primarily instrumental trio has embraced Isaiah’s soulful vocals, featured on more than half the tracks on Black Heaven, and local fans will hear these newer tracks, as well as many older deep cuts, in these upcoming shows.

Formed in 2001 in San Diego and citing Japanese psych bands like Blues Creation and Krautrock bands like Amon Düül II as early inspiration, Earthless have risen to the top of the hard rock/heavy psych scenes in recent years, on the back of a strong DIY work ethic. Recently signed to international heavy music label Nuclear Blast, Earthless is now reaching wider audiences than ever before, which is in keeping with the band’s own diverse tastes and pursuits.  While Earthless is their primary artistic focus, Mitchell also has another longstanding psych project, Golden Void, and drummer Mario Rubalcaba is a member of Rocket from the Crypt, Hot Snakes and hardcore supergroup Off! alongside Black Flag/Circles Jerks frontman Keith Morris and Redd Kross bass player Steve McDonald.

Black Heaven was recorded at Rancho de la Luna in Joshua Tree, California with Dave Catching of the Eagles of Death Metal producing, and From The West was recorded live in San Francisco in March of this year, immediately after Black Heaven was released. The live album, with its electrifying live takes on Led Zeppelin’s “Communication Breakdown” and Black Heaven opener “Gifted By the Wind” sitting alongside monumental versions of earlier jams like “Uluru Rock” and “Acid Crusher”, suggests we’re all in for a wild ride when they get here.

The shift towards more vocals is explained by Rubalcaba: “It wasn’t a premeditated thing to do a record with vocals. On the older records, Mike was responsible for a lot of the riffs that would start these jams, but on this one, Isaiah really brought his own pizazz and flavor to it. I’d say that’s one of the major differences on this album: It has more of Isaiah’s input. He took a risk bringing these ideas to us, not knowing if we’d like them. But as with everything we’ve done in the past, it felt very organic and natural.”

“For me personally, the psychedelic thing is pretty important,” Rubalcaba continues. “But I’m not sure if we’ll always be on the crazier side of things musically. Even on this record, there are moments when it’s more psyched-out, but we’ve always been really big fans of classic rock stuff like ZZ Top, James Gang, Allman Brothers—and of course, Cream. There would be no Earthless if it wasn’t for Cream. They’re like the great-grandfathers of power trios. So, some of those simpler influences have leaked through on this record. To me, [album opener] “Gifted By The Wind” has a more James Gang or ZZ Top vibe than Flower Travellin’ Band or any of the krautrock stuff. With all the vocals and harmonies, that’s definitely a different direction for us.”

New direction or not, Earthless’s flamethrower approach remains – their music melts and burns and completely envelopes an audience. Old fans and new will not be disappointed when they head back down in February.