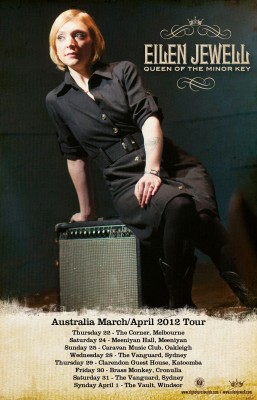 EILEN JEWELL – The Queen of the Minor Key

Fresh from the ecstatic reaction to her most recent album, “Queen of the Minor Key”, Ragged Company Touring is thrilled to announce the imminent arrival on our shores of Alt Country Chanteuse Eilen Jewell.

As well as special appearances at Bluesfest, announced today are shows for Sydney, Melbourne and Brisbane. Eilen will be accompanied by her regular touring band of guitarist Jerry Miller, drummer Jason Beek, and upright bassist Johnny Sciascia.

Since her official 2006 debut, “Boundary County”, Jewell has surveyed a wide range of traditional musical styles, from the folk and jug band leanings of those early recordings and the heart-achingly intimate grasp of alt-country, folk and swing on the rootsy “Letters From Sinners and Strangers”; through the album-length homage to Loretta Lynn of “Butcher Holler”; right up to recent albums “Sea of Tears” and “Queen of the Minor Key”, which range from the electricity of ’60s UK garage rock and Chicago blues to fiddle-driven classic country, the bump-and-grind exotica of vintage Southern California suburban saloons and slow, jazzy numbers that feature torch and tenacity that linger long past last call.

Sad songs are Eilen’s wealth and finery. Lend her your ears, and you will quickly hear why fans from all over the world admire and adore her more with each passing year.