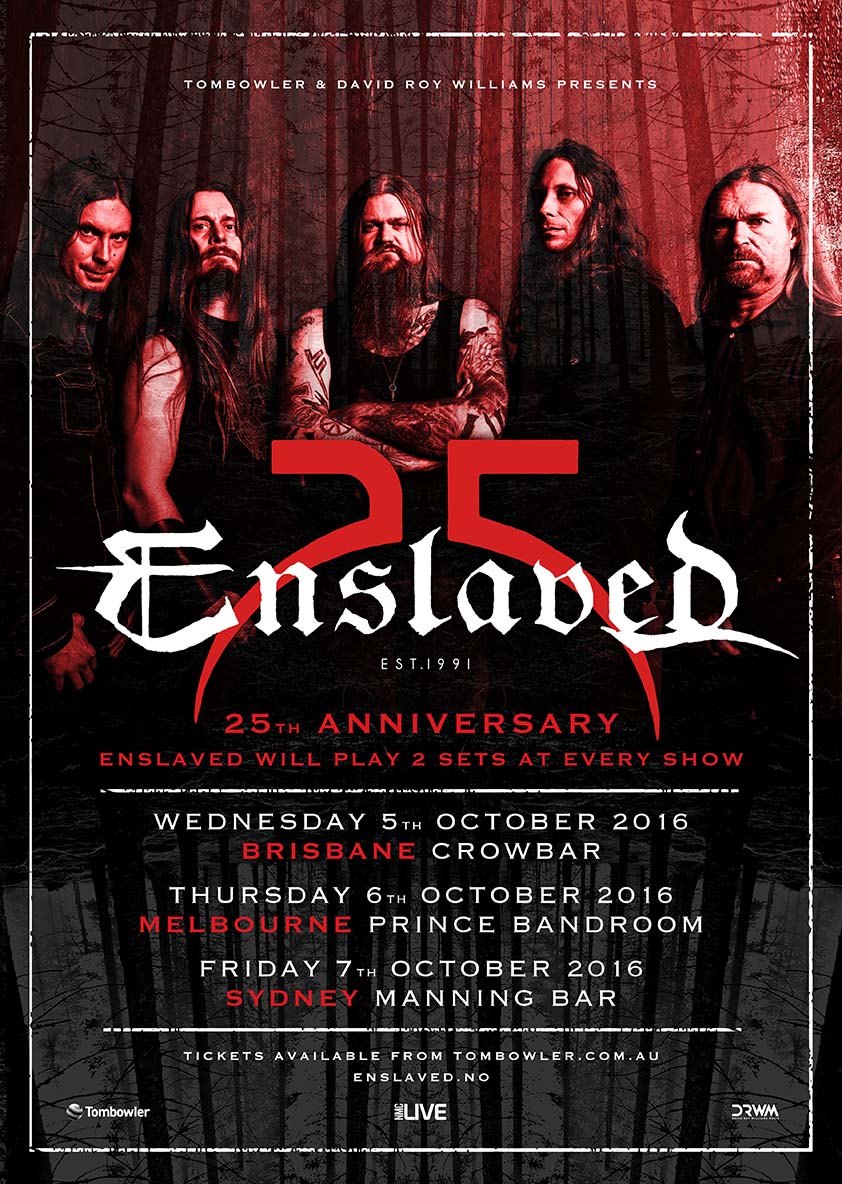 Extreme Metal artisans ENSLAVED will be bringing their 25th anniversary celebrations to Australia in October 2016.

The Norwegian blackened progressive metal band are proof that metal can be both abrasive and completely stunning. Every aspect of Enslaved live was nearly flawless – The New Fury

The format for these Exclusive Australian Only shows will see Enslaved presenting two full sets over the course of the evening. Furthermore, fans can get involved in the song selection process!

Set One :Tales From Mythological Forests: a collection of material from the earlier chapters of Enslaved’s career. The set will commence with an earth shuddering start to proceedings by drawing on early albums such as ‘Frost‘ and ‘Eld‘. With the foundations destroyed, the band will progress into the heart of the their career, focusing on the period when Enslaved uprooted and developed their sound – songs from ‘Below the Lights‘ and ‘Isa‘ will keep fans’ heart racing and fists pumping. In many respects, whilst centered on earlier material, this is a brand new show for Enslaved.

Set Two :Spinning Wheel Ritual: Enslaved look firmly to the future, visiting the more recent chapters of the Enslaved story. Their progressive nature will take centre stage, with songs from albums ‘Vertebrae‘, ‘RIITIIR‘ and ‘In Times‘ arranged together for the first time. The focus here will be a redefinition of Enslaved’s creative force, with the band pushing towards new boundaries and reaching new audiences whilst staying true to the band’s principles, and to those fans who have followed Enslaved since the very early days.

Enslaved’s 25th Anniversary Celebrations will deliver Australian fans a chance to witness Enslaved at the peak of their prowess in shows they have never seen before and will never see again. Whatever you do… don’t miss this!

VIP M&G TICKETS WILL BE AVAILABLE FOR ALL SHOWS.

With the dual guitar combinations of Ivar Bjørnson and Arve Isdal creating plenty of hard-hitting riffs to keep the crowd enthused, Grutle Kjellson‘s shrieks were completely mesmerising. It takes a huge challenge for progressive metal bands to deliver memorable performances but ENSLAVED raised the bar and showcased why they are a leader in extreme metal. – Distorted Sound

Setlist selection: 16 old school and 16 new school songs will be selected by the band and fans that purchase tickets before the end of June will be able to vote on which songs make the final cut. There’ll even be a track from 2003’s ‘Below the Lights’ on offer in each set… Finally, one lucky fan will win the ability to attend the band’s soundcheck.

To put it simply, Enslaved are pretty phenomenal live – the atmosphere was set immediately. A mesmerizing prog vibe coupled with some extreme vocals and smooth riffs had the audience hypnotized throughout. – Metal Storm

Enslaved frenzy about in a hysteria of hair and sweat. Songs like ‘Death In The Eyes Of Dawn’ and ‘The Watcher’ sound absolutely huge. That a band can be so far into their career and still play with this level of urgency is a testament to their quality. – One Metal

Enslaved can do no wrong. – Cryptic Rock