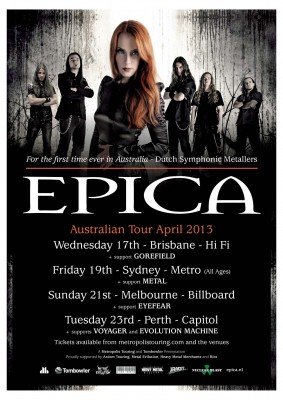 Dutch symphonic metallers, Epica, are set to tour the land downunder for the very first time and can’t wait to bring their bombastic metal masterpieces to the Aussie metal hordes.

Taking their name from an album by US power-metallers Kamelot, Epica focus on the grand, epic and majestic; building upon the gothic, progressive and power metal genres by incorporating intricate orchestral arrangements and passionate choirs. While their music is aggressive, elaborate and ambitious, flame haired front woman Simone Simons’ enchanting mezzo-soprano vocals and ravishing beauty create a saccharine intimacy amongst the grandeur. With their adventurous song structures, hyperactive drumming, rampaging guitar riffs, shredding solos and classically trained piano arrangements, Epica embody the perfect mixture of classical and heavy metal music. This dynamic has made Epica one of the most popular metal bands of the last decade.

Forming in early 2003 by guitarist and death growler, Mark Jansen , Epica quickly soared to the summit of the metal world. With a string of spectacular studio albums, backed up by stunning live performances, the melodious juggernaut shows no sign of slowing down.

Epica go to battle each night playing awe-inspiring concerts. Whether it’s leading the charge with a symphony orchestra, astonishing audiences at European festivals or getting up-close and personal, Epica’s powerful music, cinematic light show, virtuosity, charisma and energy is sure to stimulate the senses and induce even the most reserved metal head into a state of head-banging and cerebral abandon.

“Grandiose compositions to rival the likes of Blind Guardian; a breadth of scope to stand up to Dream Theater; the passion and depth of Nightwish; and one of, if not the, most outstanding female vocal performances you are likely to ever hear” (Metal Obsession)

Epica’s latest masterpiece Requiem For The Indifferent was released in March and broke into the US Billboard Top 200, a first for the band. Singer, Simone Simons, remarked, “It is so exciting! I love the new songs and can’t wait to play them live.”

Undoubtedly a world class act and one of the leading forces in the symphonic metal scene, Epica are sure to enthral, enchant and enrapture Australian audiences who will finally get a chance to witness the magic and majesty of Epica in concert on their debut Australian tour next April!