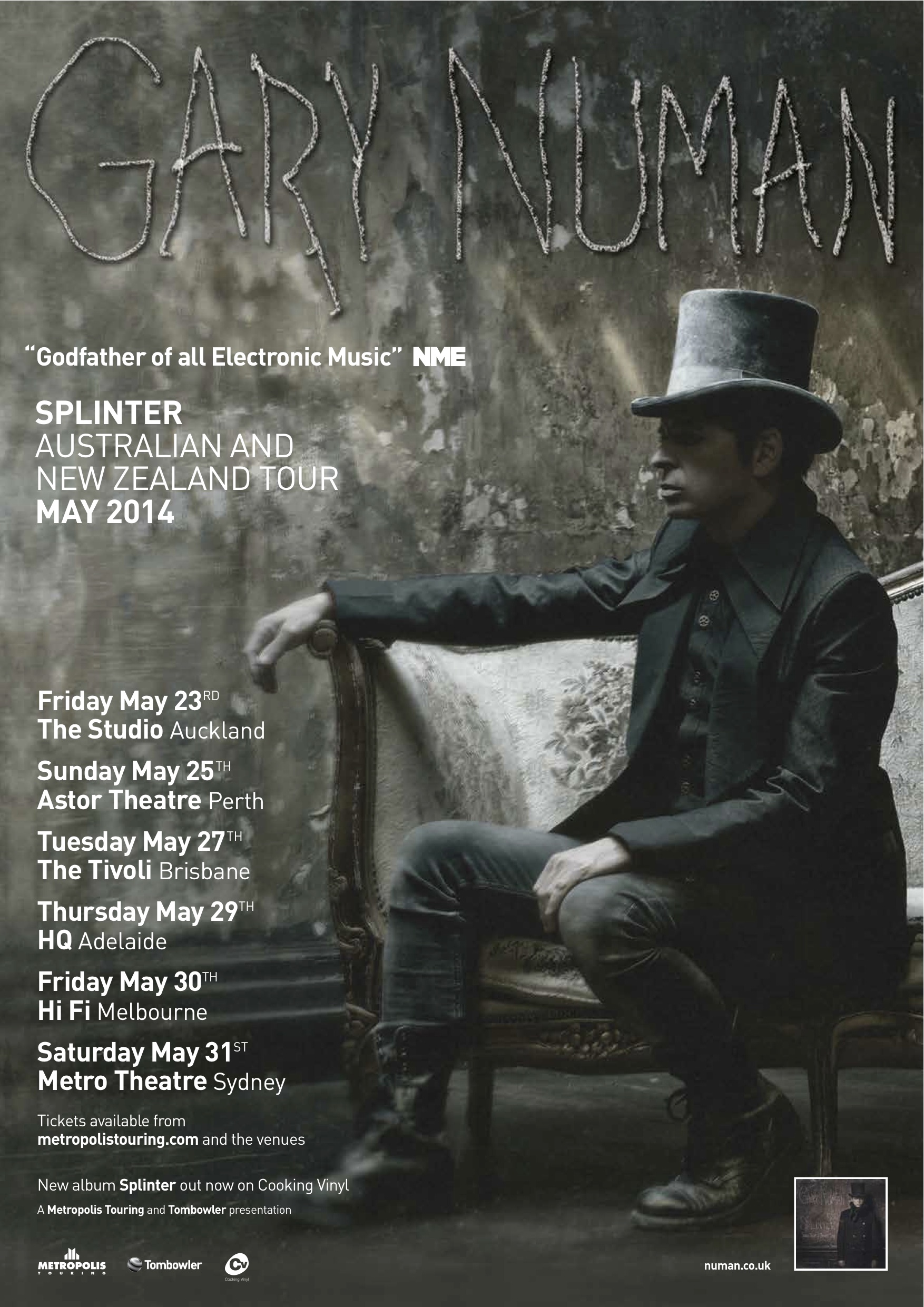 THE “GODFATHER OF ALL ELECTRONIC MUSIC” – NME

Gary Numan is a truly unique artist and everybody knows it. The English singer, composer and musician who is most widely known for his chart-topping hits ‘Are Friends Electric’ and ‘Cars’ has confirmed he will be back in Australia and New Zealand to tour his new album ‘Splinter’.

Never one to let the past remain his legacy, Gary released his 20th album at the end of 2013. Splinter has been described by Filter Magazine as “mechanized, sci-fi mini-operas.. awesomely grandiose”. It can be considered one of the best albums he has ever produced.

He has influenced everyone from Trent Reznor to Prince and The Prodigy to Afrika Bambaataa, Basement Jaxx and Kayne West.

Trent Reznor says he is “vitally important and a huge inspiration … I see me doing what I learned from him,” while Prince says that “’Replicas’ never left my turntable…there are people still trying to work out what a genius he was.”

Afrika Bambaataa muses that “Numan was so spooky, so spaced out and it sounded like the future of music to me. Anyone who knows hip hop will be familiar with his track ‘Films’ because that’s one of the original hip hop breaks … You’d be surprised what people like George Clinton from Parliament and Funkadelic used to listen to,” and Kanye West owes him a huge debt and says “I was listening to Gary Numan and I ended becoming more polished as a designer. I started to design my tracks.”

The admiration comes from all corners of the music industry with David Bowie saying he ‘has written a couple of the finest things in British pop,’ while Marilyn Manson, an artist who Numan’s influence on is totally obvious, states that he ‘pioneered electronic dance music,’ and Numan’s own contemporaries hold him in the highest regard with Devo stating that “The Pleasure Principle is so original and cool and ground breaking … it still sounds great today”. Industrial metallers, Fear Factory also paid homage with a brilliant cover of Cars that sees Numan make a cameo in the music video and on the song itself.

Numan’s May tour will feature highlights from Splinter as well as a rich selection of material from his extensive back catalogue. Recent anthems like The Fall and A Prayer For The Unborn and the classics, Down In The Park, Metal, Are Friends Electric and of course, Cars – they’ll all be there, live and in living (dark) colour!

Combine Numan’s incredible collection of songs with his larger than life stage presence and you know you’re in for a memorable night!