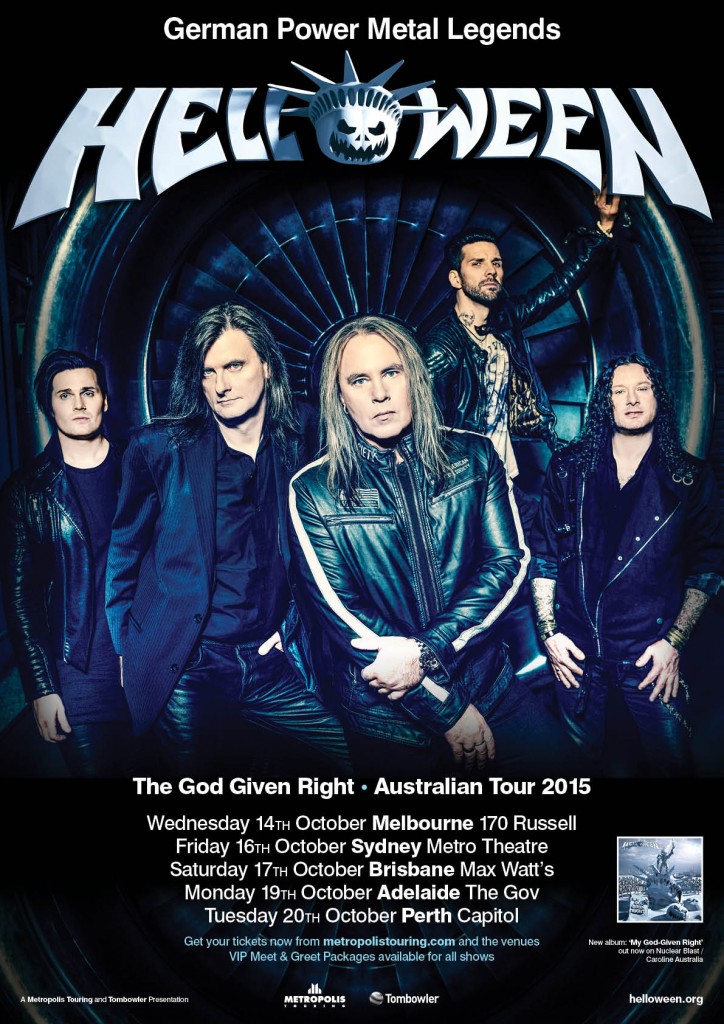 “Vibrancy and passion were at the forefront of this performance and those singing along realised they were privy to a sophisticated performance by the ancestors of power metal.” – Faster Louder (Metro Theatre review)

“These German geniuses were responsible for the biggest releases in power metal history, the Keeper of the Seven Keys albums, that still remain some of the best power metal out there today.” – Metalwani

“…still the leaders of the genre they helped create.” – heavymetal.about.com

“…the main inspiration behind the power metal genre” – Metal Obsession

“…one of those shows that stays in your memory forever.” – Free Magazine

“The German powerhouse of the genre brought their A game, or rather their A+ game, and proved why, after almost 30 years in the business, HELLOWEEN is still a force to be reckoned with.” – Metal Storm

“HELLOWEEN is back…” – Hard Rock Haven

When you think of Power Metal, one of the first bands that come to your mind is the German Legends HELLOWEEN! It’s not just a coincidence – they’ve played countless festivals all over the globe to a massive audience, and furthermore, they have taken their enthralling live performances as headline tours all over the world as well. Now, 30 years into their career, HELLOWEEN finally make their triumphant return to Australia. Incredibly, this will be the second time ever they have toured Australia and their first time ever in Adelaide & Perth!

With the 15 albums they have released so far, they have sold well over 8 million copies, and have achieved several Gold and Platinum awards. The band shows absolutely no signs of slowing down, and after over 100 sold out shows in support of their previous album, the band is on a mission to break their own records in support of their latest offering.

3 decades into their career, the band is on their absolute top form – creatively, as well as on the live show front. Hailed as one of the inventors of the power/speed metal genre, HELLOWEEN continue to break records and get better and better as the years continue. Not too many bands in the world can say that they’ve been getting better with age, but HELLOWEEN is a band than has mastered and continues to break ground in one of the most thrilling sub-genres of metal.

The fiery riffs and solos backed by the relentless thumping of the double kick drums and the soaring vocals ensure a glorious night of headbanging, sing alongs and circle pits. A HELLOWEEN gig is a party like no other. The legions of fans are sure to come out in numbers and this is one gig that will stay in your memory for a long, long time – be sure not to miss this one!