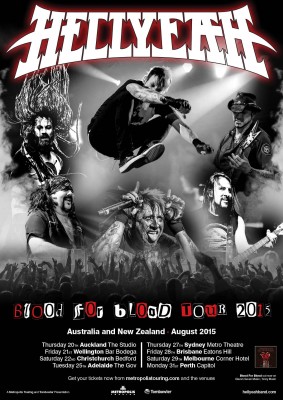 “This isn’t a rock concert. We’re in this together.  We are a fuckin’ family, and this is Heavy Metal Psychotherapy 101!” – Chad Gray HELLYEAH

Brace yourself for full on METAL assault when HELLYEAH return to our shores after long 5 years for a headline tour of Australia & NZ this coming August! – This will be their first tour of NZ since 2007 too!!

HELLYEAH are in a league of their own with their own. Their distinct sound and stage presence is best described as pure metallic fury and the envy of fans and other musicians all over the world. This is a musician’s band and they are finally getting the recognition they deserve!

“HELLYEAH’s live performance was everything anyone could have asked for and then some.” – Cryptic Rock
“This is now an in-your-face, metal eruption.” – On Stage Review

After eight years, three albums, countless tours as headliners, festival favourites and as Special Guests to A7X, Volbeat, Five Finger Death Punch and more, HELLYEAH have gone for the jugular with their latest album Blood For Blood. Every song on the album is a belter and doesn’t give the listener an inch. And the bands live shows have been more intense than ever! With the recent addition of Saunders and Brady, the guys have a new found energy that feeds the crowd relentlessly and sees them going nuts and moshing from the front row to the back every single night. HELLYEAH Live in 2015 delivers the best of both worlds. Fans are clamouring for this tour all over the world!

“Blood for Blood’ seems like an album tailor made for the stage, & HELLYEAH now have the lineup to pull it off. Trust us when we say that this is definitely an album you’ll want to see the band play as much as possible in their live sets.” – Loudwire

HELLYEAH fans are huge in number and these shows are going to be packed. Expect back-breaking mosh pits, throat destroying scream-alongs and a sense of weight being lifted from your shoulders. This band is full-on dedicated to ensuring their shows are as much about the fans as about the band so these shows will be something special!

“HELLYEAH’s live show is not one to be missed as its intensity was something you could feel.” – Ultra 5280
“HELLYEAH came out strong, truly coinciding with the characteristics of their new album. The conflagration-like screams of vocalist veteran Chad Gray were so fierce, they could have been incendiary” – Rock Roll Mag