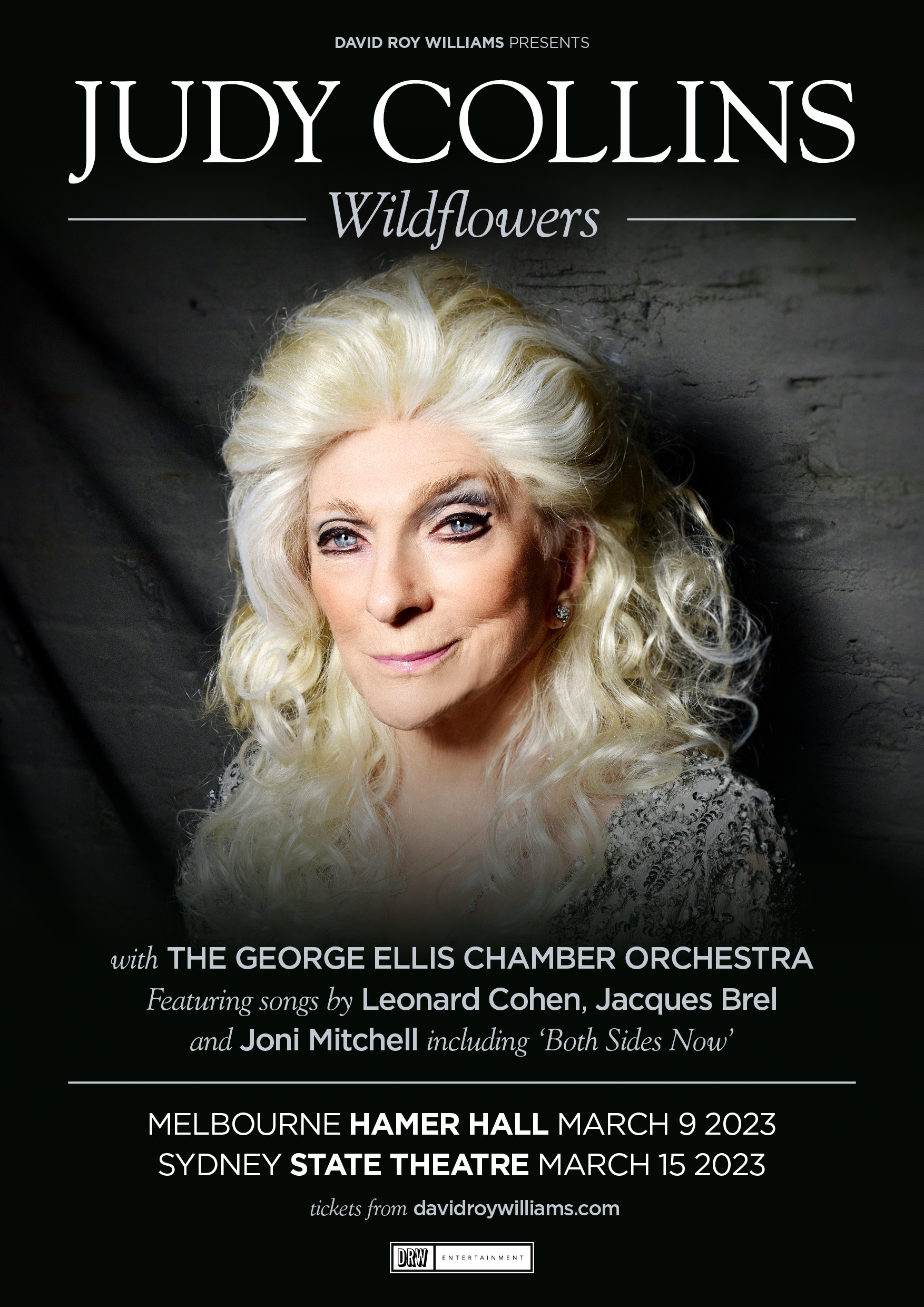 It’s been over a decade since JUDY COLLINS toured Australia – but the wait will be worth it when she returns for two very special shows in Sydney and Melbourne in March 2023, performing her 1967 WILDFLOWERS album with a  16 piece Chamber Orchestra.

The award-winning album features Judy’s stunning rendition of Joni Mitchell’s “Both Sides Now”, as well as songs by Leonard Cohen, Jacques Brel, another Joni Mitchell standard, “Michael From The Mountain”, and songs written by Judy herself.

Judy Collins has inspired audiences across the globe with her sublime vocals, boldly vulnerable songwriting, personal life triumphs, and a firm commitment to social activism. A Greenwich Village contemporary of Joan Baez, Cohen, and Bob Dylan, and the inspiration for CS&N’s “Judy Blue Eyes”, the Grammy Award winning Collins is esteemed for her imaginative interpretations of traditional and contemporary folk standards, and her own poetically poignant original compositions.

Having scored Grammys for “Both Sides Now”, and “Send In The Clowns”, Collins was again nominated for a Grammy in 2017. In the same year, her rendition of “Amazing Grace” was selected by the Library of Congress as being “culturally, historically, or artistically significant”. In 2019,  at 80 years of age, Judy’s catalogue of Gold and Platinum albums reached its zenith with the release of “Winter Stories” – her first USA #1 album.

On stage, Judy’s luminescent presence shines brightly as new generations bask in the glow of her iconic body of work, and heed inspiration from her spiritual discipline to thrive in the music industry for over half a century.

Judy has authored several books, including the powerful and inspiring, Sanity & Grace and her extraordinary memoir, Sweet Judy Blue Eyes: My Life in Music.

She is as creatively vigorous as ever, writing, touring worldwide, and nurturing fresh talent. She is a modern-day Renaissance woman who is a filmmaker, record label head, musical mentor, and an in-demand keynote speaker for mental health and suicide prevention. She continues to create music of hope and healing that lights up the world and speaks to the heart.

– A photo with Judy Collins

– Best Seats in the house