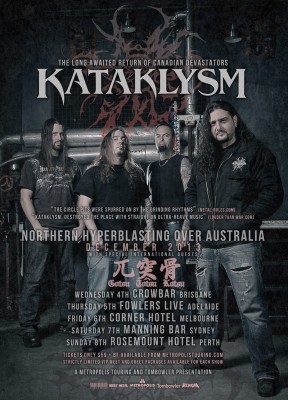 ‘KATAKLYSM played an awesome, fast, heavy set. You know it’s a heavy show when it becomes uncomfortable to stand in the venue because of the reverb, when you know that the PA can barely handle it, and when the punters are going absolutely nuts.’ – Faster Louder

Attacking like a furious blizzard from the great white north, Canada’s powerhouse purveyors of extreme death metal KATAKLYSM have laid waste to all in their path for 22 years and are still hammering ahead with a violent intensity that is unmatched by many of their contemporaries and they are making their long awaited return to Australia in December!

“Kataklysm, destroyed the place with straight on ultra-heavy music” (Louder Than War.com)

Boasting trademark elements in their sound such as brutal blastbeats, earth shaking grooves, ballsy riffage and a venomous vocal attack, KATAKLYSM give every ounce of their sweat, blood and tears in their live performances that leave all who attend their shows in pure disbelief at what they have just witnessed.

“The circle pits were spurred on by the grinding rhythms” ( Metal-Rules.com)

With a back catalogue spanning 10 studio albums – the most recent being 2010’s Heaven’s Venom(Nuclear Blast / Riot) with a new album forthcoming in late 2013 / early 2014, they will have no shortage of material on display with live staples such as Shadows And Dust, As I Slither, Taking The World By Storm and Push The Venom fully featured in their blistering and bulldozing set.

So, prepare to be crippled and broken on the road to devastation as the masters of the Northern Hyperblast take Australia by storm in December!