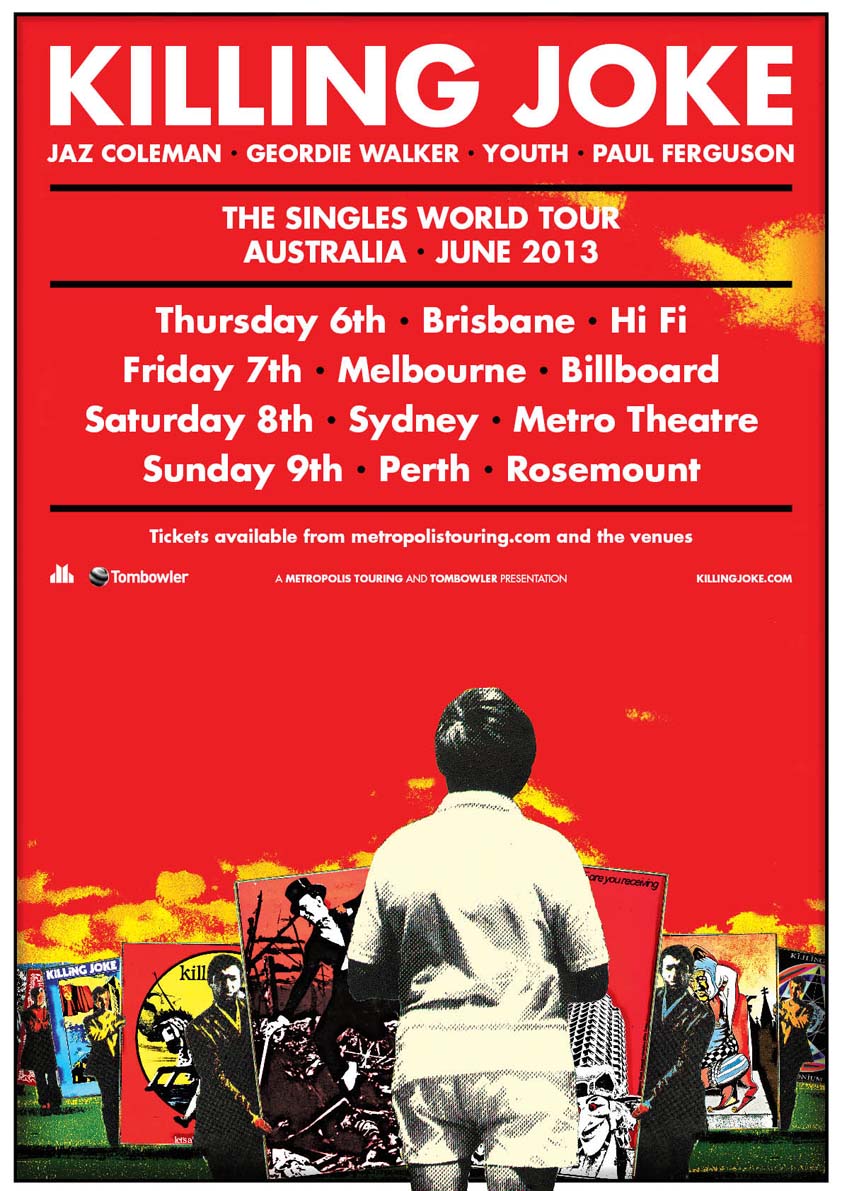 Forged in fire, brimstone and magic, Killing Joke are one of rock’s most iconic & influential outfits.

After over 30 years, few bands can claim to have the same drive and integrity as the day they began.

Killing Joke can. While several of their peers have faded into anomic clones of one another, Killing Joke has changed, evolved and transformed. Always searching, always on the vanguard of rock music and always fresh, the band continue to make pivotal, vital, forward-looking music.

What Killing Joke may lack in commercial success, they have more than made up for in terms of respect and admiration. An internet search will bring up just about every famous alternative band citing Killing Joke as a predominant influence – from Nirvana to Nine Inch Nails, Ministry to Metallica, Faith No More to Foo Fighters.

In 2013, the original seminal line up of Killing Joke will embark on their first ever career spanning Singles World Tour. Fans can expect a jaw dropping set of Killing Joke classics – ‘Wardance’, ‘Requiem’, ‘Follow the Leaders’, ‘Lets Go to the Fire Dances’, ‘Eighties’, ‘Love Like Blood’, ‘Kings and  Queens’, ‘Millennium’, ‘Pandemonium’, ‘Money is not our God’, ‘Seeing Red’,‘In Cythera’ plus loads more. However, this is not some going through the motions nostalgia tour! Jaz Coleman is furious, political and sharp as a knife, just as he’s always been. Geordie Walker’s distinctive guitar sound is as stately yet snarky as ever, Youth’s bass is as ferocious as it is technically minded and Paul Ferguson’s drums are a controlled frenzy of apocalypse inducing dance beats.

Killing Joke‘s Singles World Tour includes Australia (their first time here since 2004) and New Zealand and is the must see event for 2013! Whether new to the legacy that is Killing Joke and for those dedicated fans dying to hear some of the classics revitalized through a contemporary gloss, this is one of the most anticipated tours of the year! Incredibly although Jaz Coleman is a part time resident of Auckland this will be Killing Joke’s first shows on New Zealand soil!