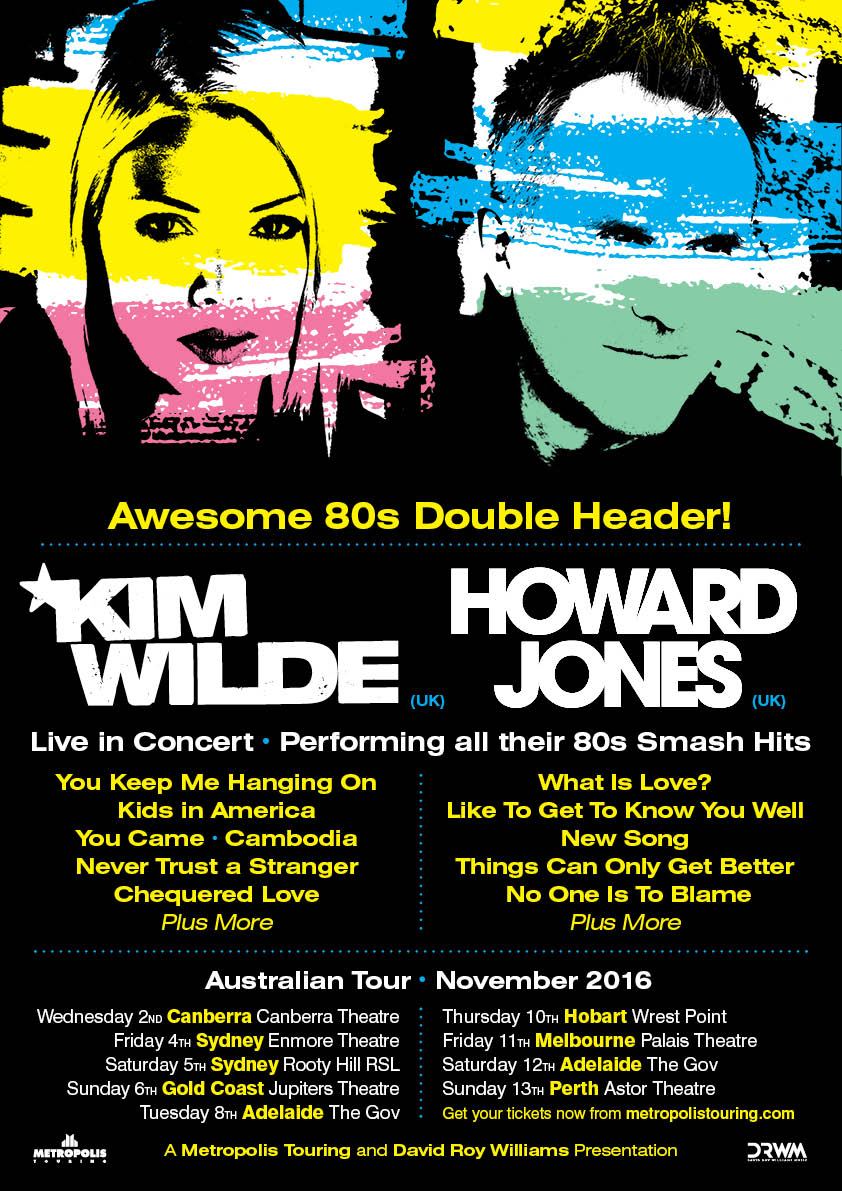 Get ready for a double dose of the 1980’s smash hits as two of the era’s biggest icons, Kim Wilde & Howard Jones, return to Australia for a co-headlining tour.

“… their songs have stood the test of time… a high-energy, fun-packed performance” – https://www.bristolpost.co.uk

Mention Kim Wilde and people’s eyes light up. The blonde singer with the siren voice and girl-next-door appeal is one of pop music’s most dazzling stars. The French consider her the “Brigitte Bardot of Rock”; German fans still revere her as the sexiest glamour girl to come out of the 80s and in Australia she has always been very close to our hearts having charted three number one mega-hits – ‘Kids In America’, ‘You Keep Me Hangin’ On’ and ‘If I Can’t Have You’ as well as another 6 Top 40 hits including ‘Cambodia’, ‘You Came’, ‘View From A Bridge’, and ‘Chequered Love’. To put her amazing career in perspective she has sold 10 million albums and 20 million singles and is the most successful British female artist of the 80’s! Despite being broadcast on Australian shores on MORE Digital with ‘The Kim Wilde ‘80s Show’ this will be Kim’s first performances on Australian shores in almost three years.

“It’s time to let your hair down as this is guaranteed to be an amazing night of unforgettable 80s nostalgia!” – The Dwarf Review

Howard Jones is described by AllMusic.com as “one of the defining figures of mid-’80s synth pop.” . A classically trained pianist, Howard Jones applied his classical skills to synthesisers, creating a unique sound and composing a string of chart topping hits. His 1983 debut single, “New Song” peaked at number 3 in the UK singles charts – more recently “New Song” received new life when it was used in a pivotal scene in ‘Breaking Bad’. Howard’s first two albums ‘Humans Lib’ and ‘Dream into Action’, brought Howard a host of hits including ‘Things Can Only Get Better’, ‘What is Love?’, ‘Pearl In The Shell’, ‘Like to Get To Know You Well’, ‘Hide And Seek’ (performed at Live Aid), ‘Look Mama’ and ‘No One Is To Blame’, which reached No.1 in the US. Howard has sold over 8 million albums across the globe.