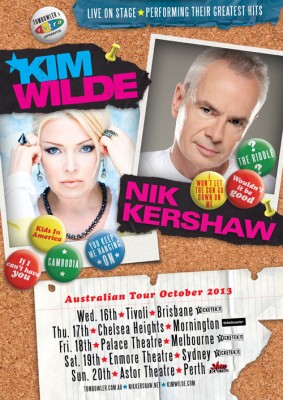 Mention Kim Wilde‘s name and people’s eyes light up. The blonde singer with the siren voice and girl-next-door appeal is one of pop music’s most dazzling stars. The French consider her the “Brigitte Bardot of Rock”; German fans still revere her as the sexiest glamour girl to come out of the 80s and in Australia she has always been very close to our hearts having charted three number one megahits- ‘Kids In America’, ‘You Keep Me Hangin’ On’ and ‘If I Can’t Have You’ as well as another 6 Top 40 hits including ‘Cambodia’, ‘You Came’, ‘View From A Bridge’, ‘Chequered Love’. To put her amazing career in perspective she has sold 10 million albums and 20 million singles and is the most is the most charted British female artist of her generation! This will be the Queen of English Pop’s first headline tour since her ‘Singles Collection Tour’ in 1994

Joining Kim Wilde on the line-up will be 80s heart-throb Nik Kershaw. Elton John called him ”one of the best songwriters of a generation” and along with Howard Jones he led the synthesized pop world of the 80s with a string of Top 10 smash hits and cool videos including ‘Wouldn’t It Be Good’, ‘I Won’t Let The Sun Go Down On Me’, ‘Wide Boy’, and ‘The Riddle’. This will be Nik Kershaw’s first tour down under since ‘The Riddle Tour’ waaaay back in 1985!!!

For many of us the 80s were the undoubtedly the best period of pop music. Countdown was on every Sunday night and two of the hottest 80s stars that featured regularly on Countdown were Kim Wilde and Nik Kershaw. Between them they had a staggering 13 top 40 hits. For the first time in decades Australian audiences will be able to hear their greatest hits live on stage. As a very special added bonus, this tour will be a world wide first of Nik Kershaw as part of Kim Wilde‘s backing band along with Kim’s brother, Ricky Wilde, and his daughter, Scarlett Wilde, on backing vocals!

This is guaranteed to be an amazing night of unforgettable 80s nostalgia!