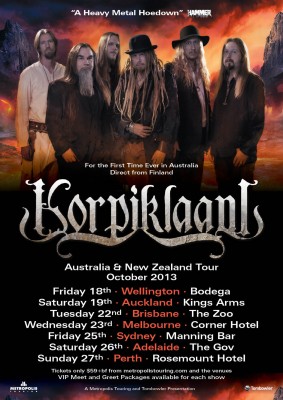 Prepare your liver and put on your drinking hats & beer goggles because Finland’s alcohol fuelled folk metal sextet KORPIKLAANI are setting course for Australia. They are getting ready to party with our finest (or our worst?) this October on their very first visit to these shores.

With roots set deep in traditional Finnish folk music, KORPIKLAANI take said roots, turn them upside down and add a hearty helping of galloping metal which has placed them atop the rather burgeoning folk metal scene. With an extensive back catalogue including their latest release, 2012’s Manala (Nuclear Blast) and years of extensive touring, the band have honed a vibrant and energetic live performance that has been seen the world over to critical acclaim at festivals such as Bloodstock Open Air and the prestigious Wacken Open Air.

When they finally hit Australia, KORPIKLAANI will deliver a raucous set with plenty of their vivacious and catchy anthems such as Vodka, Tequila and Beer Beer… notice a recurring theme here? “A joy to behold – and it’s hard not to get caught up in the party atmosphere, the crowd enjoying themselves almost as much as the band” (Metal Hammer)

So keep the beer on ice, lay out the tequila shots and chill the vodka. The party is about to start andKORPIKLAANI are knocking at the door! The question is, do you want to join in on the fun?

“Think metal is all about stern faces and frostbitten poses? Think again.” (Terrorizer)