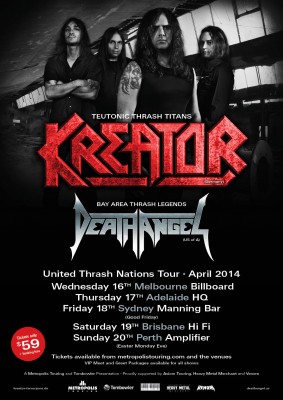 For nearly 30 years, Germany’s biggest export in thrash metal, KREATOR, have proven to be persistent, innovative and an unstoppable force. Their legendary status has influenced many current bands and they are part of the “Teutonic Big 4’’ alongside Destruction, Sodom & Tankard.

Since their inception in 1982 they have released 13 raw, powerful and explosive studio albums. KREATOR successfully blended influences from US Thrash contemporaries Metallica, Slayer and co, with their signature brand of blistering Euro Metal to create a sound that has endeared them to fans worldwide. In 2012 KREATOR released their stunning album ‘Phantom Antichrist’ which saw the band receive their highest ever German chart success. KREATOR recently released the scintillating live DVD ‘Dying Alive’

“the crowd go into a crazed moshing frenzy” (Metal Hammer)

KREATOR’s incomprehensively brilliant live show has seen them travel the globe spreading their love of all things power and brutality to the masses and it will finally be Australia’s turn for the first time since 2009 to experience their pure on stage thrash mayhem. Get ready for the kings of Teutonic Thrash Titans!

Joining the mighty KREATOR will be none other than San Francisco’s thrash metal legends, DEATH ANGEL.

Spawning from the home of many a legendary Thrash band, the Bay Area, DEATH ANGEL are set to destroy Australian stages and to show as to why they are so heavily recognized as influential bands of the genre. Their groundbreaking album ‘Act III’ remains an “all-time thrash classic’’ (Metal Hammer) and their recent 2013 release ‘The Dream Calls For Blood’ wowed the critics with smashing return to their brilliant best.

When they were last toured with Armored Saint in 2009 they ripped Australia a new one and garnered reviews like:

One thing is for certain… this is an opportunity to see thrash metal supremacy at its best, an incredible and inspirational double bill onslaught. Thrash ‘Til Death…..

“Prepare to get your face ripped off!” Mille Petrozza (Kreator)