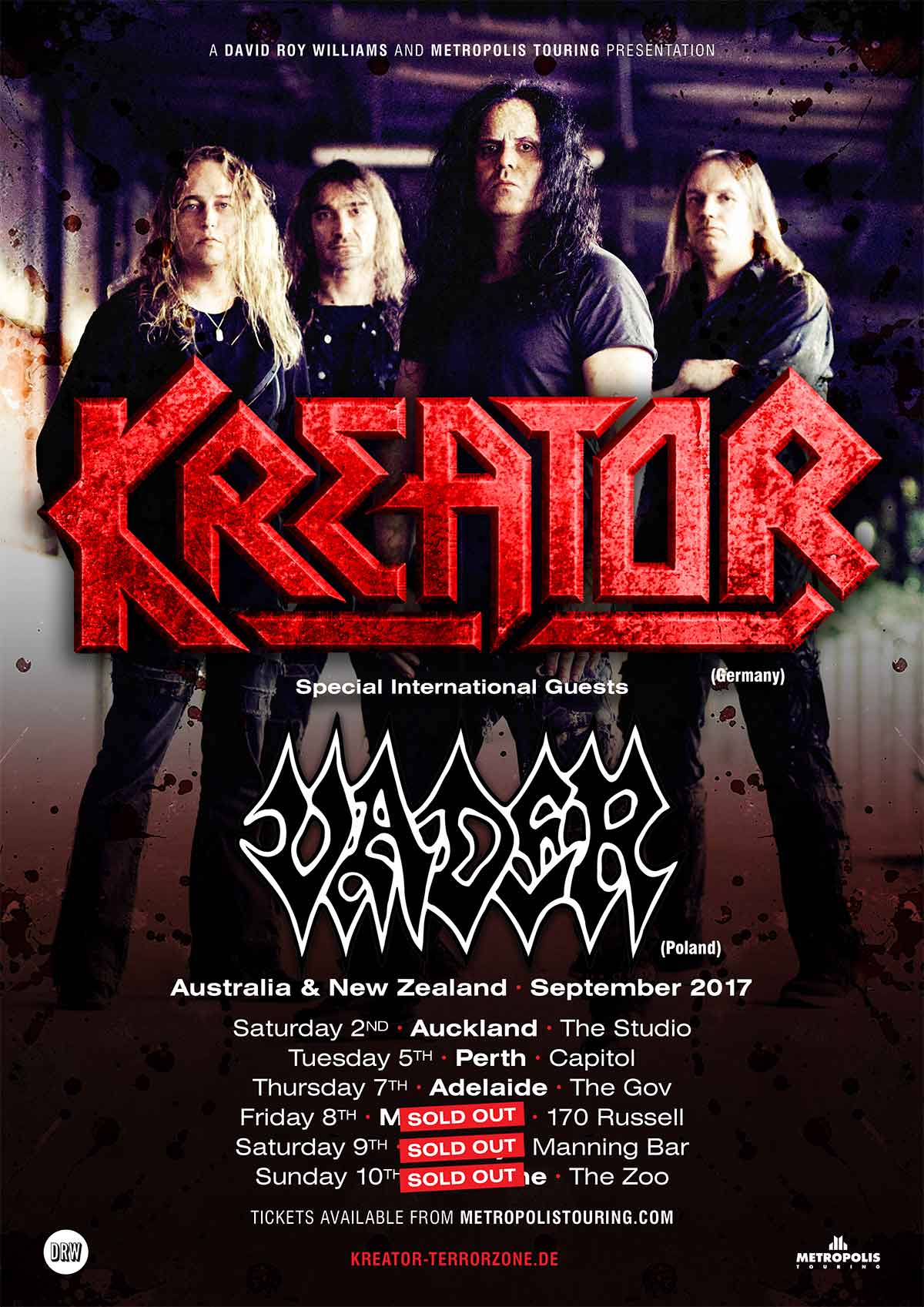 Hit the extreme aggression button metal fans – The Gods Of Violence return to tear the top of your head off and crush you into submission.

“The encore was filled to the brim with really old-school material with songs like “Flag of Hate”, “Under the Guillotine” and “Pleasure to Kill”. Needless to say, the crowd went crazy.” Metal Wani

Three years after they successfully pulverized the nation, Kreator are back to thrash and grind Australian audiences into sheer bloodlusting ecstasy. Since the 1980’s Kreator have been unleashing powerful slabs of Teutonic thrash-metal upon euphoric fans, and 2017 sees no letup in the onslaught, with the band’s latest opus “Gods Of Violence” receiving some of the most superlative reviews in the band’s career.

“Everything is mind blowing and stunning… KREATOR were here and proved that they still belong to the spearhead of the world wide Trash Metal scene. Period.” Reflections Of Darkness

But it’s on stage that Kreator’s dominance is on full display. Theirs is a fierce showcase of metal magnificence with roots as an originator of thrash but with a contemporary focus  – and this from a band that has been unleashing its intense artistic vision for over thirty years. Kreator’s frontman Mille Petrozza was born and bred in the metal scene and has always been open to inspiration from various sources, with the state of the world today inspiring trenchant observations of our time laced with an inventive wit the envy of his peers. Double bass-drum destroying Jürgen “Ventor” Reil has been sinking rapid-fire blows deep into the gut since 1982, and Speesy Giesler’s bass is guaranteed to tear you apart. 2nd guitarist Sami Yli-Sirniö is a musical genius who fills the stage and auditorium with his spine-crunching guitarwork.

Kreator’s loyalty to their fans is legendary, and the fans reciprocate with fist-pumping sweat-drenched passion. A night of roof-raising chants and pummeling riffs awaits those that thirst after a metal gig of maximum energy. Kreator have stood the test of time and launch forward into the night with all the might of a titanic metal machine churning at its peak.

Joining KREATOR on this crushing double bill is one of the Pioneers of the Death/Thrash scene, VADER, who return to Australia from Poland after 7 long years! VADER’s brand of brutal savagery has stood the test of time, unleashing over three decades of unrelenting riffs and delightfully hellish ferocity. Having toured with the likes of Testament, their aggressive and devastatingly powerful live show is unmatched! Previously signed to Earache and Metal Blade and now with 11 albums under their belt, Vader released their latest album The Empire on Nuclear Blast late last year. New songs as well as favourites including Dark Age, Vicious Circle, Angels of Steel, Wings and Triumph of Death are sure to create one tornado of a raging circle pit so be ready for a hell of a great time!

“Delivering a furious set, proving that they are one of the most influential death metal acts around” The Metalist