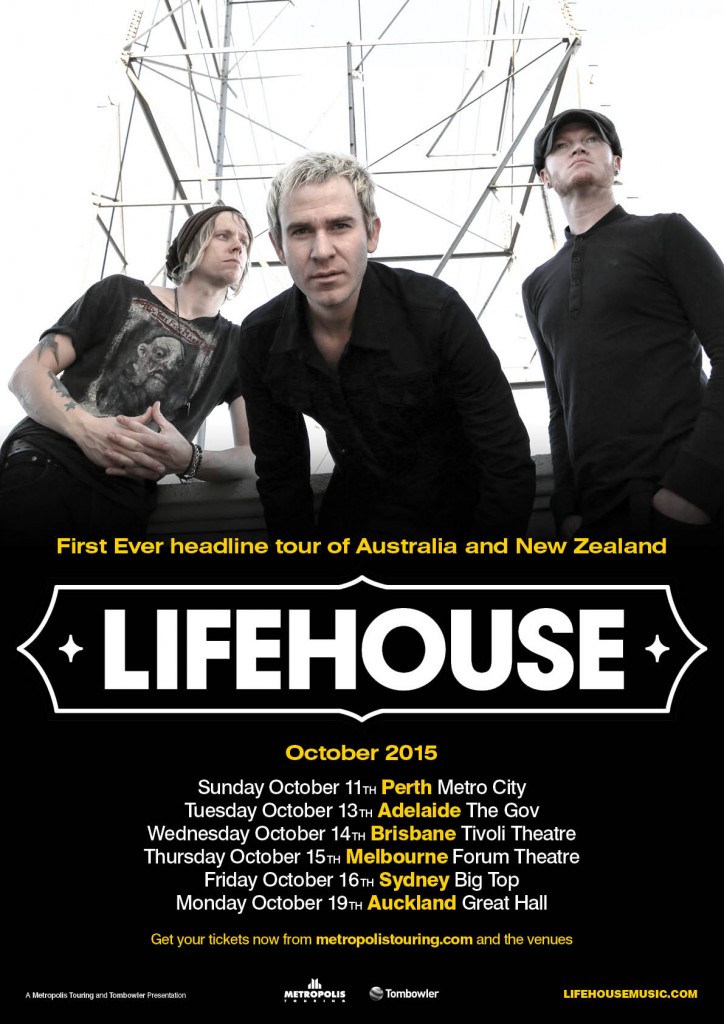 With over 15 million albums sold, American alternative rockers Lifehouse have been making waves all over the globe. From their debut single “Hanging by a Moment”, and with hits such as “You and Me”, “Halfway Gone”, “First Time”, “Broken” and “Whatever it Takes”, Lifehouse have continued to astound audiences; and now for their first ever string of headline shows Lifehouse are coming to Australia and New Zealand in support of their recently released 8th album “Out of the Wasteland”. All signs point towards this being one of the tours that you cannot miss.

“They put on such a great show, the lights were spectacular mixed with the music and Jason’s stage presence was simply wonderful!”– Review Stream

Late in 2013, the band took a hiatus to focus on their own personal projects outside of Lifehouse. This time off gave the band a well deserved refresh, and now they’re back with their strongest material yet.

“Tracks like ‘Hurricane’ show Lifehouse at their most engaging, paving the way for Out of the Wasteland to be remembered as their biggest and best yet.” — Artist Direct

On the live front, the band is well known for putting on incredibly powerful and moving live shows. Fans all over the world are screaming out for Lifehouse headline tours, and this tour marks the first time since their appearance at 2002’s M-One Festival that the band will be playing beneath the Southern Cross. The band is seriously excited to finally make their way to Australia and New Zealand.

“Their live shows are genuine and moving, combining Wade’s heartfelt lyrics with their professional musical regiment. They have a ton of energy and still treat the big shows like club gigs, giving fans all the way in the back something to cheer for.” AXS

For Lifehouse, Out Of The Wasteland is a culmination of their life’s work, a new chapter that serves as the pay-off for having the patience to reconnect with the musical and personal chemistry that took them to the top. Prepare yourselves for an emotional, powerful and energetic live show, one that will stay in your memories forever.

“Never before have I seen Lifehouse be so engaging with the crowd, and Jason’s vocals were as perfect as ever.” – Confront Magazine