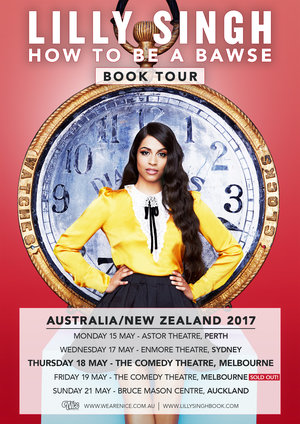 LILLY SINGH will visit Perth, Sydney, Melbourne & Auckland this May as part of her ‘How To Be A Bawse’ tour.

Tickets include a copy of Lilly’s new book ‘How To Be A Bawse’.

The tour brings the humour, motivation and real talk to life from Lilly’s debut book ‘How To Be A Bawse’: A Guide to Surviving Conquering Life — out March 28. I n the book, Lilly shows how everyone can become a bawse — a person who exudes confidence and reaches goals. Lilly has reached global success and amassed more than 11 million subscribers through her signature brand of observational comedy and inspirational YouTube videos. As a role-model to women and girls around the globe, Singh also created her #GirlLove initiative to break the cycle of girl-on-girl hate and encourage positivity amongst each other.

“I am so thrilled to write my first book and share, all in one place, what I’ve learned about achieving success and happiness. This journey has taught me to always pick yourself up, not allow anything to stand in your way and that the only secret to achieving your dreams is hard work,” said Lilly.

Lilly Singh (aka iiSuperwomanii) is a multi-faceted comedian and entertainer. She has found worldwide fame through her comedic and inspirational YouTube videos.. She has appeared in the feature films Ice Age: Collision Course and Bad Moms.

Singh was named to Forbes’ 2016 30 Under 30 Hollywood & Entertainment list and Fast Company’s Most Creative People 2016. She has appeared on numerous television shows including multiple stints on The Tonight Show with Jimmy Fallon. She has been featured in Entertainment Weekly, People Magazine, ELLE Canada, Seventeen Magazine, Vogue India, The Wall Street Journal and The New York Times among others. She has collaborated with Selena Gomez, Dwayne “The Rock” Johnson, Jimmy Fallon, Mila Kunis, James Franco and Seth Rogen. Singh starred in and produced her own feature length film, A Trip To Unicorn Island, which premiered on YouTube Red in February 2016. A successful entrepreneur, Singh released her own signature lipstick called BAWSE with Smashbox and has also worked with Coca-Cola.