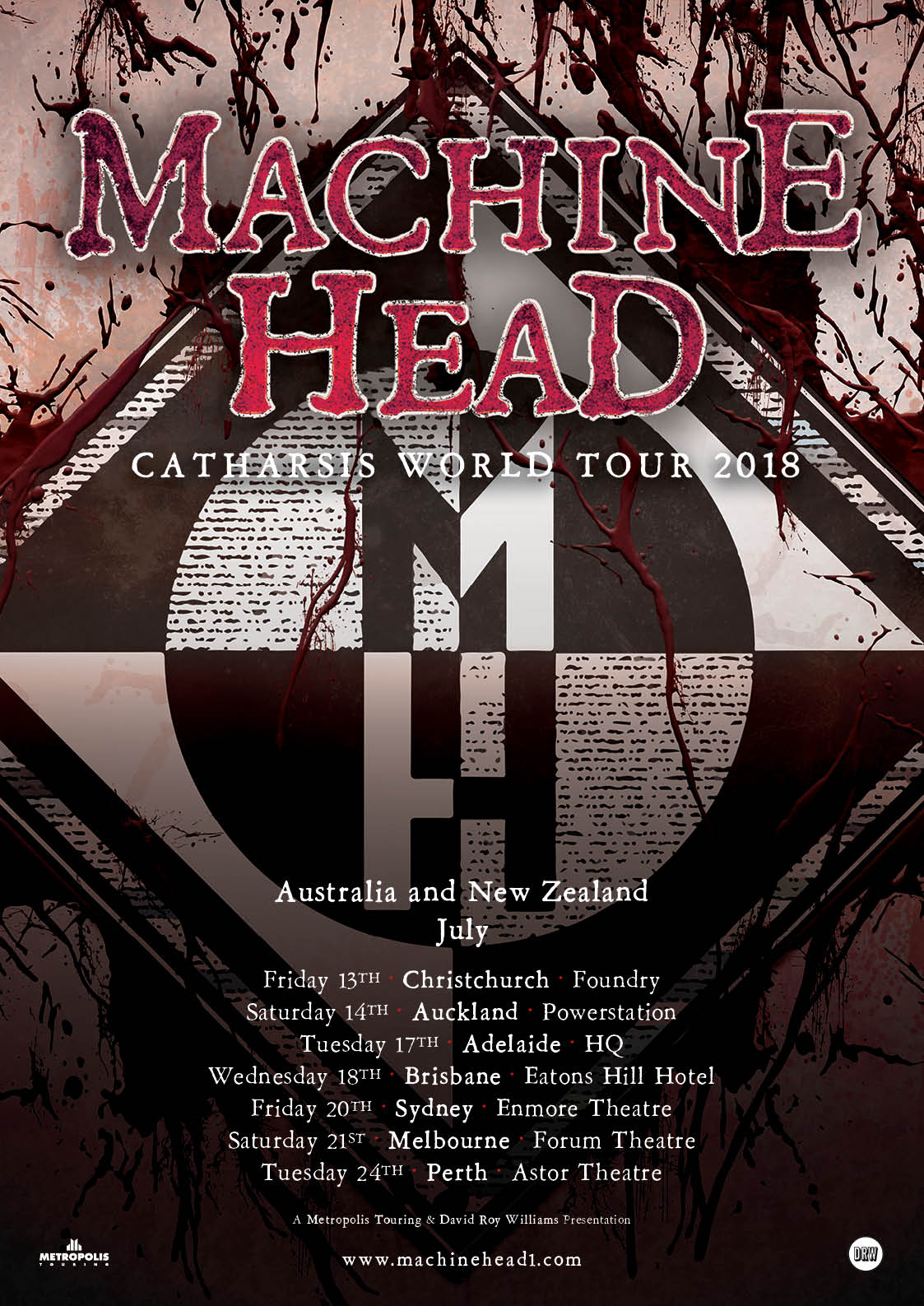 After a completely SOLD OUT Australian Tour of epic proportions in 2015, Heavy Metal Icons MACHINE HEAD are set to make their triumphant return in 2018 and this time around they will be armed with their new album ‘Catharsis’ which entered the Australian ARIA Charts at Number 10.

“Unadulterated metal at its best and what better band to deliver such pummeling music than MACHINE HEAD.” – TheRockpit.net

“How the fuck are Machine Head getting better this far into their career?” – metalsucks.net

MACHINE HEAD have flown the flag for truth, integrity and creative desire in metal, starting with the earth-shattering prescience of 1994’s classic ‘Burn My Eyes’ and continuing through to 2014’s ‘Bloodstone & Diamonds, producing a series of albums that consistently redefined the very notion of heaviness and music while upholding an invigorating lyrical narrative that has turned the band into one of the few in modern times that can boast an unbreakable connection with the hearts and minds of the metal faithful.

“Machine Head totally blew the roof off, the doors open, and the windows out, blasting through selections spanning the entirety of their 20+ year career.” – metalsucks.net

With 7 Top 30 ARIA charting Albums and monstrous heavy weight songs like “Locust”, “Imperium”, “Now We Die’’, “Halo”, ‘’Aesthetics of Hate’’, ‘’Ten Ton Hammer’’ plus many more, it’s no wonder their Australian fan-base are chanting for their return. Machine Head shows are the next level of live experience. Front-man Robb Flynn is one of the most charismatic front-men in the world and they have towered above the competition with a ruthless determination and dedication to the cause.

“The crowd stomped their feet hard & chanted “Machine Fucking Head” until they reappeared creating an over whelming electric atmosphere so thick in density it was possible to see it.” – louderthanwar.com

A MACHINE HEAD live show is as much about the crowd as it is about the band. MACHINE HEAD do not just perform and leave – you’re in for highly energetic show, with bodies flying everywhere! Prepare yourselves to be bludgeoned by a wall of sound and leave the venue with ears ringing, voice boxes shredded and bodies crushed. MACHINE HEAD obliterates any notion that veteran bands can’t sustain their passion and intensity while also setting a new standard for sonic destruction and virility along the way.

Don’t miss the return of the mighty Machine Head to Australia.