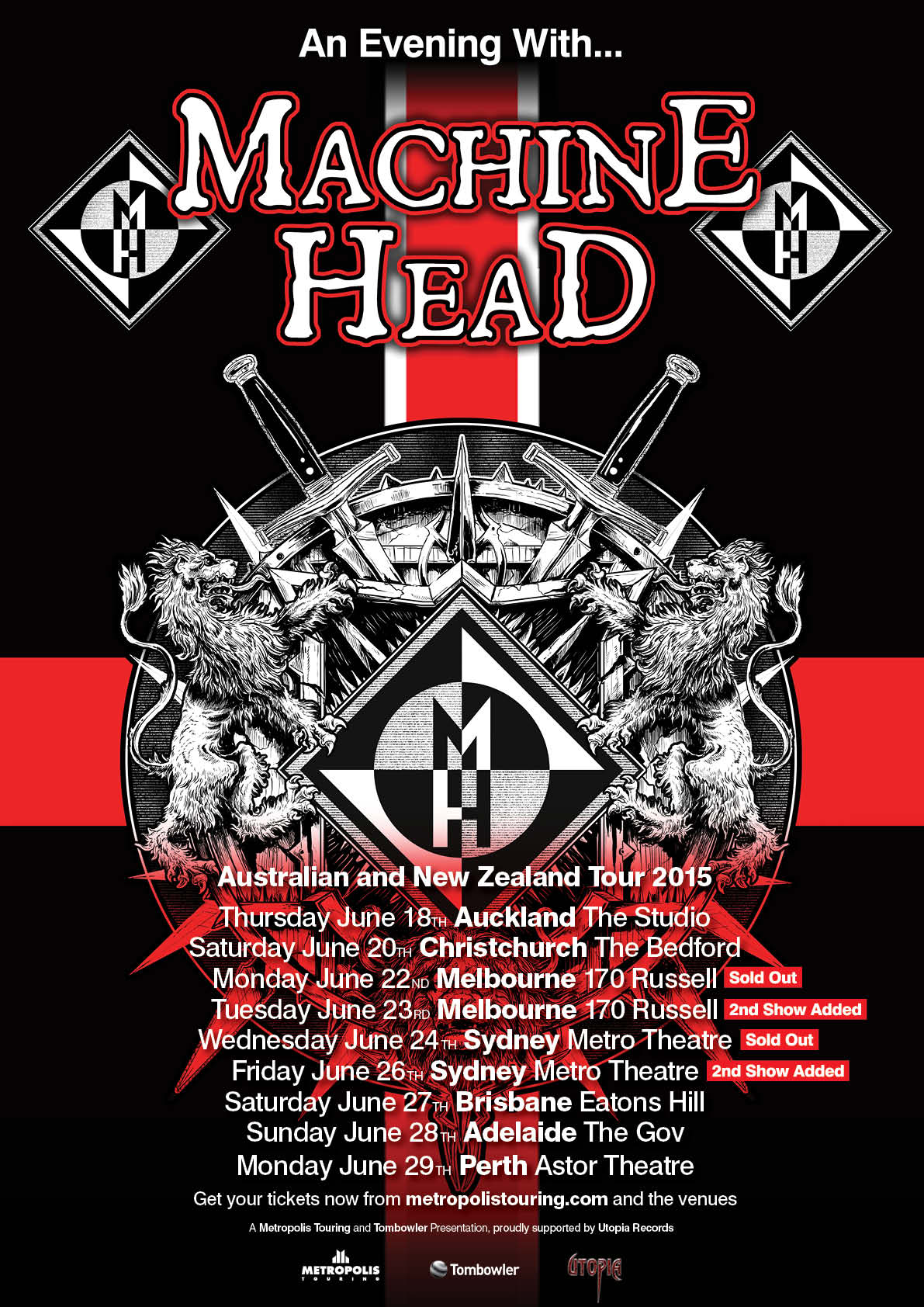 AN EVENING WITH MACHINE HEAD

Hailing from Oakland, California, Machine Head are one of the biggest names in Metal.  Every worthwhile musical subculture needs its heroes andMachine Head have been just that for the past 20 years. Starting with the earth-shattering prescience of 1994’s “Burn My Eyes” and continuing up to 2014’s “Bloodstone & Diamonds”, they have constantly redefined the very notion of heaviness and are one of the few in modern times that can boast an unbreakable connection with the hearts and minds of the metal faithful.

Now Machine Head are bringing their phenomenal live performance to Australia, on a headline run all across the country. It is sure to be one of the best shows ever to come Down Under!

“An audience going fifty shades of bonkers to some of the finest metal ever crafted.” – Metal Hammer

Machine Head are a band operating at the absolute peak of their collective powers, as exemplified by their new album ‘Bloodstone & Diamonds’ debuting at #10 in the ARIA Charts – a phenomenal achievement for a metal band, which also shows the loyalty of fans in Australia!

“Striking an exquisite balance between brute force, insistent melody and bold experimentation, this is the finest mainstream metal album of 2014 by a huge margin.” – The Guardian

Machine Head shows are the next level of live experience. Front-man Robb Flynn is one of the most charismatic front-men in the world and they have towered above the competition with a ruthless determination and dedication to the cause for 20 years, making this is sure to be their biggest Australian tour to date!

A Machine Head live show is as much about the crowd as it is about the band. Machine Head do not just perform and leave – you’re in for highly energetic show, with bodies flying everywhere! Prepare yourselves to be bludgeoned by a wall of sound and leave the venue with ears ringing, voice boxes shredded and bodies crushed. The Blood, The Sweat, The Beers!

“It’s hard to know what hit the floor faster, the collective jaws of everyone in the room or the pile up of bodies in the pit” – Rock Sins

The return of the mighty Machine Head to Australia, their first headline tour since 2010, is sure to be a memorable experience, and is likely to be one of the best tours of the decade! Do not miss this one, Head Cases!