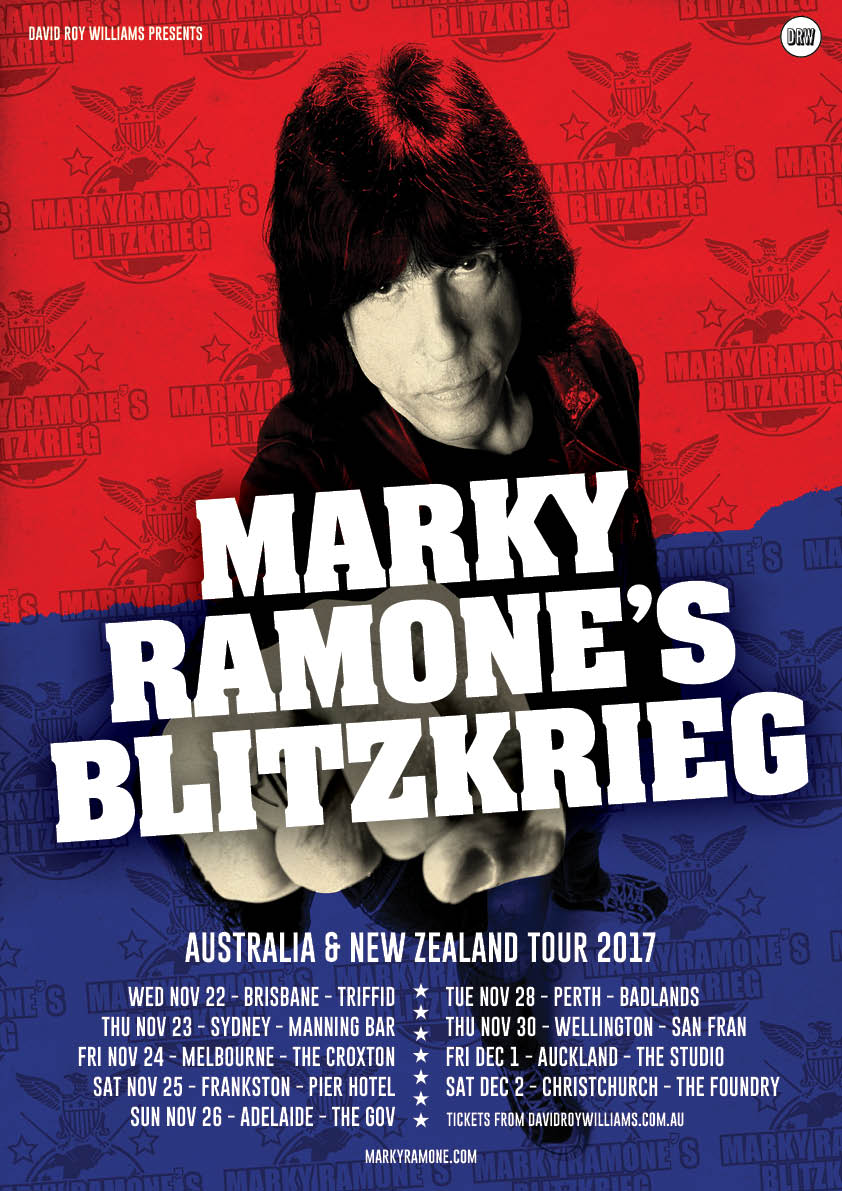 This November will herald the return of true punk rock royalty to our shores, Marky Ramone.

Marky is one of the last remaining members of The Ramones, and the one with the longest lineage, having handled skins duties for the formative punk outfit between 1978 to 1983 and again from 1987 until 1996. An original denizen of the NYC punk scene centered on Max’s Kansas City (Marky also played with Wayne County and Richard Hell’s Voidoids with whom he appeared on the classic Blank Generation LP), Marky is keeping The Ramones’ spirit burning bright and will be bringing a huge haul of Ramones classics to venues across Australia.

During his tenure with the group, Marky left his mark on several seminal releases including 1978’s I Wanna Be Sedated, 1979’s Rock And Roll High School, 1981’s The KKK Took My Baby Away, and 1989’s Pet Semetary. For his current shows, Marky is digging all the way into The Ramones catalogue to deliver an absolute treat for every Ramones fan.

“The setlist is 38 Ramones songs. Every song that we play, people are gonna know. It extends from the first album, [1976’s The Ramones] all the way to Pleasant Dreams and the Brain Drain album.”

“They didn’t pause once in the first 50 minutes: “Judy Is a Punk,” “I Wanna Be Your Boyfriend,” “Sheena Is a Punk Rocker,” “I Wanna Be Sedated” and “Rock & Roll High School” all received rapturous sing-alongs.” Rolling Stone

The Ramones are recipients of a Grammy Lifetime Achievement Award and Marky has found bringing The Ramones music into the future to be totally exhilarating, “I always enjoy playing these songs. The audiences get younger and younger and it’s just a privilege to play to an audience that wasn’t around when we were together. Playing in front of 18-22 year olds is great because they love the energy and the lyrical content… it’s fresh and new again. It’s a lot of fun,”

“A sea of fists hit the air in repetitions of four with each “Hey-Ho, Let’s Go!” chanted. Even after 36 songs, the show was still too short and fans lingered in the venue, basking in the feeling the music left in them. For any Ramones fans, Marky Ramone’s Blitzkrieg is a must see.” Soundcheck411