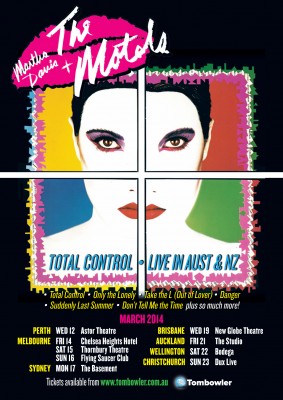 MARTHA DAVIS and the MOTELS

This coming March will mark the first time Martha has visited Australia since the Countdown Spectacular Arena Concerts of 2007 and the first time performing a full show since 1988.

Described by Los Angeles Times writer Robert Hilburn as “the most charismatic female performer in rock” Martha was renowned for her smoky, powerful voice and as a leading light of the MTV era with her sultry, edgy video clips.

From the dawn of the 80’s, Martha Davis and the Motels kicked off an impressive string of hit singles and albums with ‘Total Control’ (which hit higher in Australia than anywhere in the world – #4) and the Gold ‘Motels’ debut album. Minor hits ‘Danger’ and ‘Whose Problem’ led to the explosive ‘All Four One’ album and the massive success of ‘Only The Lonely’ and ‘Take The L (Out of Lover)’.

Following further hits with ‘Suddenly Last Summer’, ‘Remember The Nights’ and ‘Shame’, The Motels disbanded and Martha released her first solo album ‘Policy’. The Top Ten ‘Don’t Tell Me the Time’ led to Martha undertaking a massive three month long tour of Australia after which she took a well-deserved break.

In more recent times, Martha Davis has continued to release albums, both solo and with her reconstituted Motels, and her jagged sophisticated pop tales of betrayal, heartbreak and redemption never fail to thrill. But what else can one expect from a voice so unique, unmistakable and timeless?