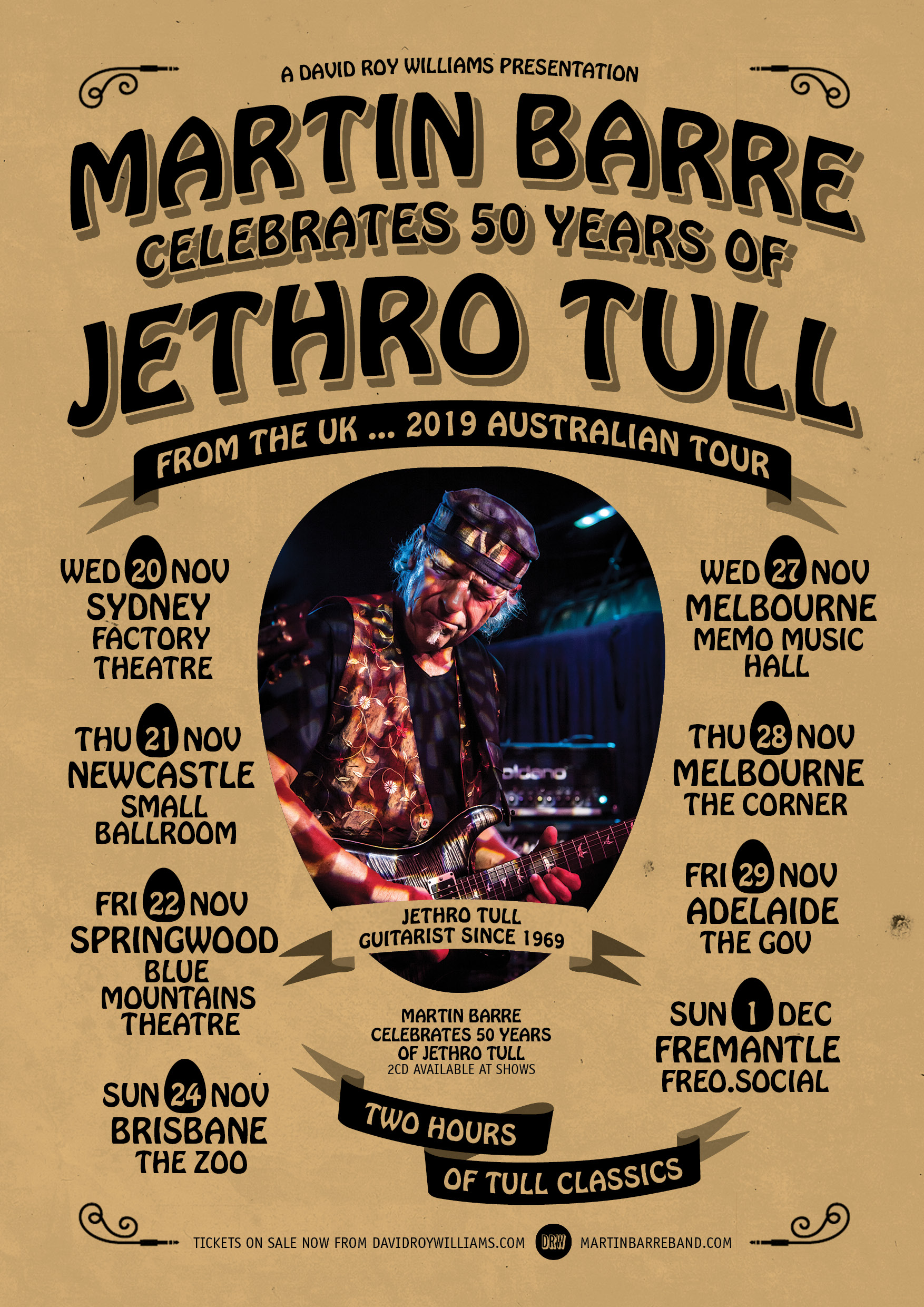 50 Years of Jethro Tull sees Martin performing over two hours of classic Tull including timeless hits “Aqualung”, “Songs From The Wood”, “Bungle In The Jungle”, “Thick As A Brick” and “Locomotive Breath”, as well as deep cuts and fan favorites.

Still officially a member of Jethro Tull, Martin is recognized as one of the most talented guitarists on the planet, with his solo on “Aqualung” having been celebrated as one of the top 25 guitar solos of all time.

Guitarists including Steve Vai, Joe Satriani, Eric Johnson and Joe Bonamassa have identified Barre as a major influence, and his work on “Crest Of a Knave” earned him a Grammy (notoriously beating out Metallica for Best Hard Rock/ Heavy Metal Recording).

“(Jethro Tull’s) music is so brilliantly written and well put together, what with its hard-to-play parts and odd time signatures, not to mention the great guitar sounds of the totally underrated Martin Barre.”Geddy Lee (Rush)

As well as his extraordinary haul of 60 million records sold as a member of Tull, Martin Barre has also worked with some of the world’s most influential musicians including Paul McCartney, Gary Moore and Phil Collins, and Barre has shared the stage with such legends as Jimi Hendrix, Fleetwood Mac, Pink Floyd and Led Zeppelin.

“As a young musician starting out, looking for inspiration, I was fortunate to have Martin’s guitar playing to inspire me, illuminating all the different ways to play guitar and create musical magic. I was mystified by his perfect blend of electric blues & rock – exciting, earthy, stellar and unique… He was brilliant. Thank you, Martin Barre!”Joe Satriani

In conjunction with the tour Martin has released a new double album MLB 50 YEARS OF JETHRO TULL which will be available at all shows.

“It’s going to be an exciting set encompassing my 50 year history with Jethro Tull. We love being on the road and touring, seeing our dedicated fans and we’re so excited to be coming to Australia this year!  I receive so many emails from fans there asking when I’m next playing down under, so it will be brilliant to spend November playing for everyone and taking them on that incredible journey I had with the band.”