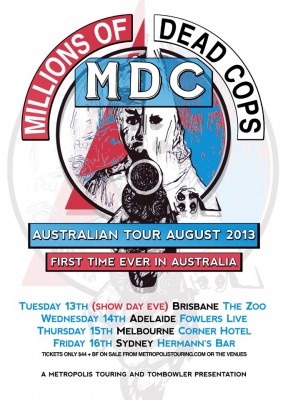 MDC, aka Millions Of Dead Cops, Multi Death Corporation are credited as one of the most politically vocal American Hardcore Punk bands to come out of the early 1980’s and will make their way to Australian shores for the first time ever this August.

Forming in 1979, MDC were one of the pioneers of hardcore punk. MDC released their debut album in 1982 on their own label (distributed by Jello Biafra’s Alternative Tentacles). Today the album is widely regarded as an essential punk classic. Packed with vitriolic aggressive riffs, punchy punk rock songs and blunt force social commentary. MDC lashed out at the social mores and hypocritical values of Regan era America with their fists in the air and their hearts on their sleeve – promoting social conscience, equality and liberty. Songs like “John Wayne Was A Nazi”, “My Family is a Little Weird”, “Dick for Brains”, “I Remember”, “Corporate Death Burger” are cornerstones of hardcore punk. Songs you can mosh to, but with a message. And who could forget the humorous, pro-vegetarian, country-tinged “Chicken Squawk”?

Through the 80’s and 90’s MDC released several demiurgic records in punk rock lore including “Smoke Signals”, “This Blood’s For You (Millions of Dead Christians)” and “Shades of Brown” – with each subsequent album expanding the scope of their socially conscious satire and incorporating more melody and more diverse musical styles. MDC broke up in 1995, but frontman and founder, Dave Dictor, reformed the band in 2000 – later releasing the full length album “Magnus Dominus Corpus” in 2004. MDC conducted a 25th Anniversary tour featuring the band’s original line up in 2005.

Over 30 years after their formation, MDC are still full of break neck, old school, punk rock energy and loaded on furious guitar riffs – singing their anthems for the anarchic, open minded and disenfranchised. A message just as vital and potent today as it was back then, a message backed up by angry, upbeat, toe-to-toe, rock ‘n roll. David Dictor is still full of piss and vinegar and ready to take on the status quo – spewing his biting anti-authoritarian bark with the same vigor as he did three decades ago.  Completing the current line up is original guitarist Ron Poser, current bassist Mike Smith who joined the band in 2008 and a new addition on drums Jesse Cobb!