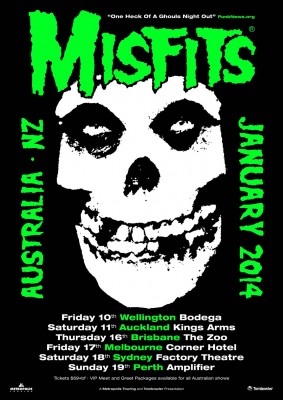 One Heck Of A Ghouls Night Out!

When you think of a band that is defined as being outside the realms of what is punk, one of the first bands to spring to mind has to be the one and only Misfits. They have left their darkened imprint on many a soul worldwide with their iconic horror punk stylings, blending the intensity of punk rock with themes and imagery from horror films and literature for over 35 years and they are making their long awaited return to Australia in 2014!

There is little doubt that Misfits have had a major influence on many different bands over the years both in image and of course with their music. A testament to this is that they been covered by a myriad of artists such as Metallica, Guns ‘N Roses, My Chemical Romance, NOFX, Cradle Of Filth, Sick Of It All, AFI and The Alkaline Trio which has resulted in the Misfits being introduced to completely new different audiences with each of rocks new generations.

Attending a Misfits performance is a totally immersive experience; the band gives it 110% from start to finish with unbridled energy and every drop of their blood, sweat and tears is left on the stage leaving many of their contemporaries looking like a bunch of amateurs and let’s face it, the Misfits would not have it any other way! Unlike many live shows, a Misfits show is like a veritable punk rock family gathering where everyone comes together under one roof to have some fun!

“Misfits played harder, faster and better than most half their age.” louderthanwar.com

Misfits need to be seen live to be truly appreciated. Their setlist is chock full of classics such as Die, Die My Darling, Attitude, Last Caress, Where Eagles Dare, Skulls, Mommy, Can I Go Out And Kill Tonight?, Astro Zombies, Hybrid Moments, We Are 138 and Horror Business to name but a few.

“Skulls, goat heads & dead bodies hanging on spears decorated the stage. Fog was coming out of the mouths of the goat heads and the place was filled with abomination and adrenalin.” examiner.com

So Australian fiends, grab your spiked leather jackets, style your Devil’s lock and get ready to be ghouled into a lesson and history of punk rock with the one and only Misfits! The Misfits are here to stay and every day is Halloween!