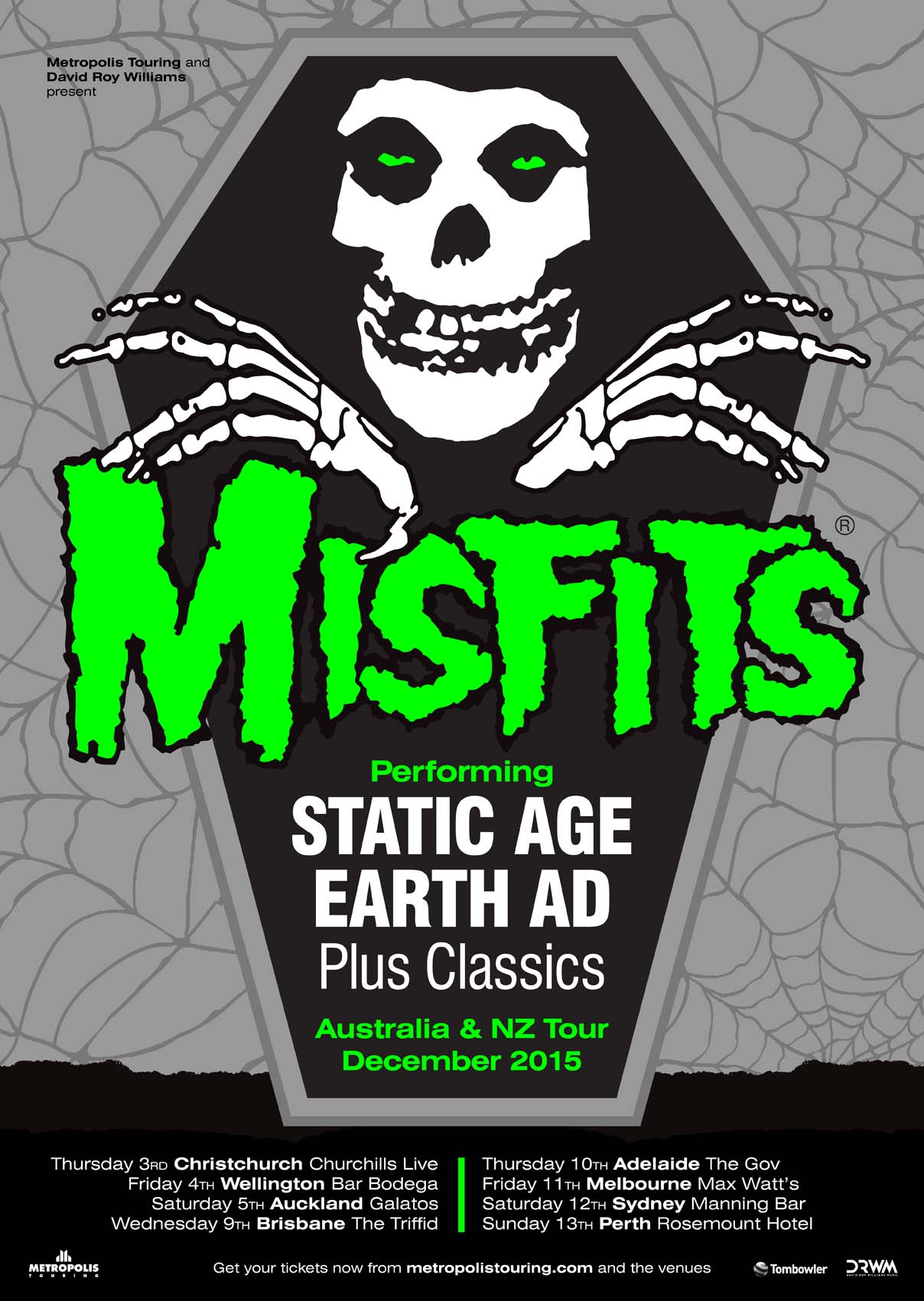 “Almost from the second THE MISFITS take to the stage a mess of frenzied moshing breaks out front-and-centre, and the energy doesn’t let up for ninety minutes.” The AU Review

‘One Heck Of A Ghouls Night Out” PunkNews.org

From hell they came… in April 1977 at the dawn of the punk movement, the Misfits were born. They wound up making history and creating a legacy that has truly withstood the test of time. 30 years on THE MISFITS are generating more interest than ever before.

To celebrate this significant tombstone, THE MISFITS are going to fill your Christmas stockings with ghoulish delight because December’s exclusive Australia/ New Zealand tour will feature STATIC AGE and EARTH AD in full.

“If you ever have the chance to see them live, do it. It’s a decision you won’t regret and a performance that will last with you for your entire life.” The 59th Sound

Bands across the ages have paid tribute to THE MISFITS including Guns ʻn Roses, My Chemical Romance, Prong, NOFX, Cradle Of Filth, Sick of It All and Metallica who covered no less than three MISFITS songs on “Garage Days Revisited”. The iconic “Fiend Skull”, which was once crudely painted on their equipment, leather jackets and everything they could get their hands on, has since become a staple in pop culture, and an instantly recognizable symbol worldwide.

“There are many bands in the world that are on that bucket list of bands that you must see… and horror punk legends Misfits are definitely on that list.” The Rockpit

STATIC AGE features the band’s earliest work including all time classics such as ‘Attitude’, ‘We Are 138’ and ‘Last Caress’. Their second album EARTH AD features “Die Die My Darling”, “Green Hell” and “Mommy, Can I Go Out And Kill Tonight”. But if that’s not enough raw meat to gorge yourself upon, you can bet you’ll be well satisfied with THE MISFITS Christmas cheer of “Astro Zombies”, “Hybrid Moments”, “Where Eagles Dare” and “Skulls”.

“Misfits started it all. They are the true pioneers.” Get Shot Magazine

“When fans come to a Misfits show, they get a band who gets up there and gives them all they’ve got. We give them the real thing – that’s how we’ve always done it. At a show, everyone’s just part of the band, there’s no them and us – we’re all us.” Jerry Only – THE MISFITS

The Misfits have been preserved on determination bound by unequaled loyalty to their fans and the sheer will to survive. The ferocity and melody that has made the Misfits omnipresent and immortal sees the band continue to sell out shows and draw thousands of fans night after night around the globe.

So come on out Fiends – All hell will break loose when the kings of horror-rock drag humanity by the throat into a world of darkness filled with ghouls, goblins and creatures of the night. Move over Saint Nick, because when THE MISFITS are in town every day is Halloween!

“The band gave punters everything they paid for: a whole lot of blood, sweat, fire and brimstone, just the way they know how.” Spotlight Report