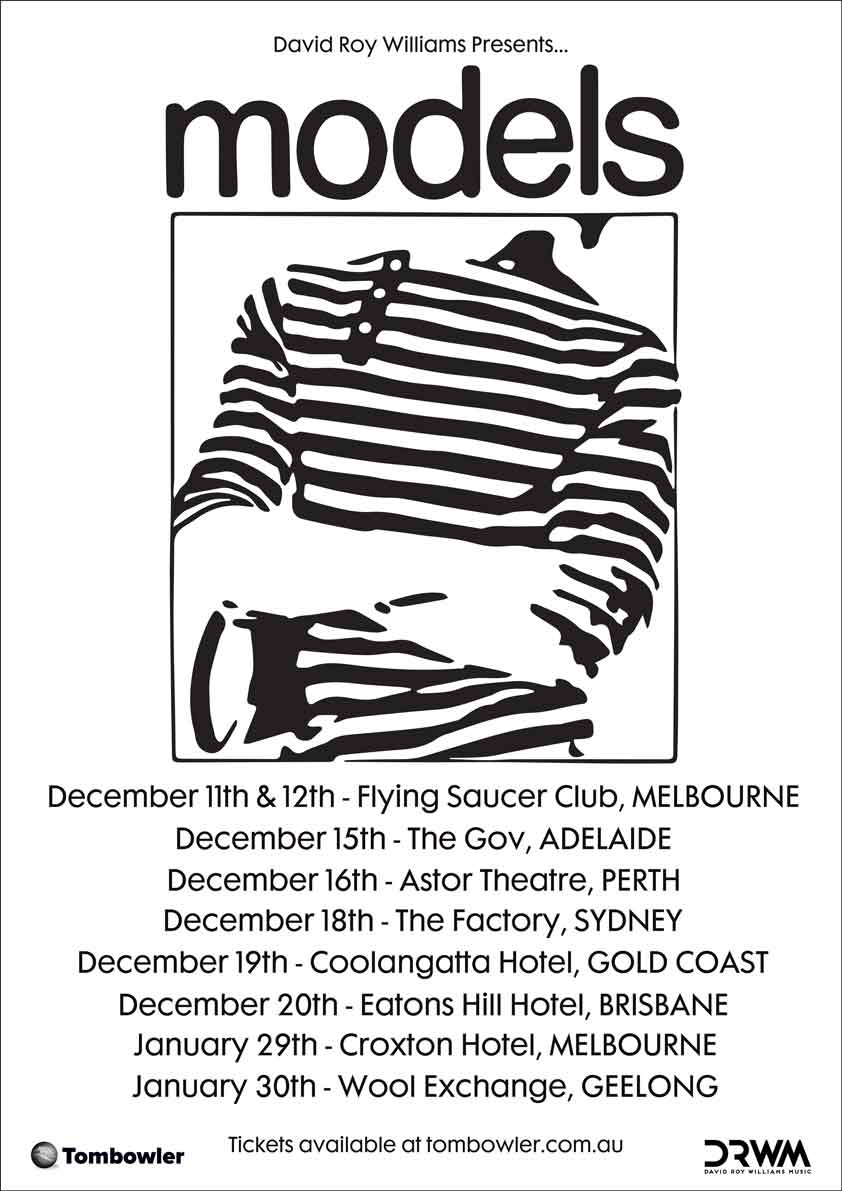 Melbourne 80’s art-rock wizards, Models, are set to excite audiences nationwide this summer and now due to popular demand have added two additional dates in Melbourne and Geelong.

We are extremely excited to announce that 80’s icons Huxton Creepers will be reforming to join Models for one very special night only at the Croxton Bandroom on Friday the 29th Jan.

December 2015 and January 2016 will see Models play shows in all major capital cities where the band will perform hits from classic albums: Alphabravocharliedeltaechofoxtrotgolf (1980), Cut Lunch (1981), Local and/or General (1981), The Pleasure of Your Company (1983), and Out Of Mind Out Of Sight (1985).

Melbourne fans will be treated to two extra special shows at the Flying Saucer Club where the band will perform in their entirety what are arguably the two records which most dazzlingly showcased both their artistic verve and pop smarts. First up on Friday the 11th December the band will present Local &/or General, the 1981 album recorded in England with the line-up which will also form the frontline for the shows this summer. Then the very next night the band will change gears for a unique comprehensive performance of their breakthrough 1983 LP The Pleasure Of Your Company, an album that peaked at number 12 in the charts and is listed in the top 50 in the encyclopaedic 100 Best Australian Albums book.

The breakthrough lineup of Sean Kelly (Guitar/ Lead Vocals), Andrew Duffield (Keyboard/ Vocals) and Mark Ferrie (Bass/ Vocals) will be joined by drummer extraordinaire Ashley Davies to perform models classics including ‘I Hear Motion’, ‘Two Cabs To The Toucan’, ‘Big On Love’, ‘Local and/or General’ , ‘Evolution’, ‘Happy Birthday IBM’, ‘Atlantic Romantic’, ‘Telstar’ and ‘Out Of Mind Out Of Sight’.

Having emerged from the detritus of punk with an outburst of creative energy which also gave birth to acts as diverse as The Birthday Party, Hunters & Collectors & INXS, Models developed a loyal fan base which saw them grow in popularity to become a mainstay of the Aussie pub scene performing alongside the likes of Midnight Oil, Icehouse, The Church, The Divinyls & Hoodoo Gurus. Throughout their career the band remained a critics’ favourite for their intelligent lyrics, eclectic arrangements, and dedication to breaking down artistic boundaries.

Emanating from the creative maelstrom of Melbourne’s post punk art-rock scene, Models released a succession of acclaimed albums culminating in the #1 smash “Out Of Mind, Out Of Sight”. Models were inducted into the ARIA Hall of Fame, in 2010.