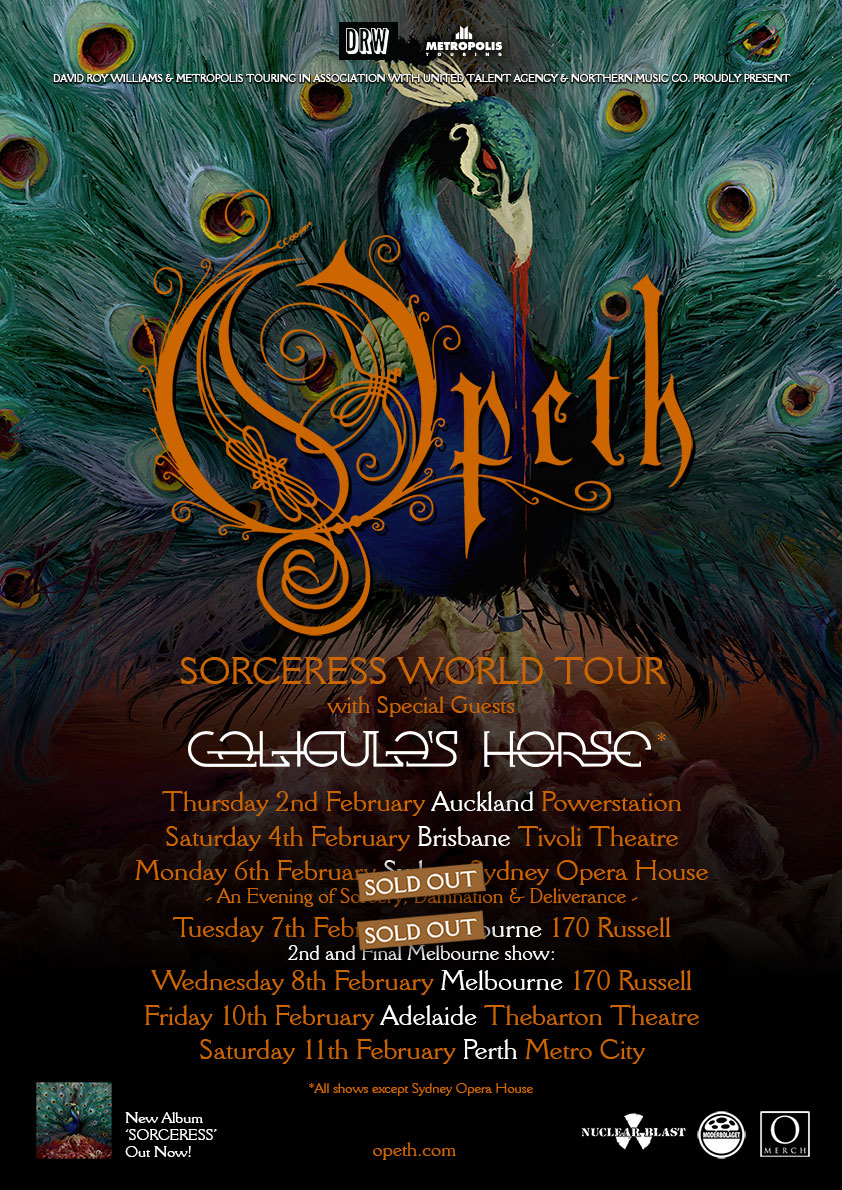 The evolution of OPETH as a band is wondrous, witnessing spine-tingling music which bestrides genres, and an exponential growth in an ever diversifying fan base. OPETH performances are without peer – their live show is a deeply emotional, yet exhilarating experience. From centre stage they create an atmospheric utopia; theirs is truly a unique concert experience, and one not to be missed. If OPETH live deliver at an ever increasing peak, their artistic prowess in the studio is reaching dizzying heights, as will be seen in the sheer majesty of their upcoming album ‘Sorceress’. After their highly successful tour of Australia in 2015, and timed to complement their now sold out ‘Evening of Sorcery, Damnation & Deliverance’ concert at the Sydney Opera House, OPETH are pleased to announce Australian and New Zealand shows for February 2017 as part of the ‘’Sorceress World Tour’’.

The Swedish Powerhouse cannot be stopped! They recently announced a hugely innovative concept: 3 special shows at historic venues around the world – Radio City Music Hall in New York on October 1st, SSE Wembley Arena in London on November 19th and the famed Sydney Opera House in Australia on February 6th 2017, which sold out in record time.

OPETH’s twelfth full-length is an unparalleled adventure, where visions cleverly and secretly change, colours mute as if weathered by time, and sounds challenge profoundly. ‘Sorceress’ is, by definition, moored in Åkerfeldt’s impressive record collection—his one true vice—but, as always, there’s more invention than appropriation at play.

There are few bands that can or will match Sweden’s OPETH. Since forming in the tiny Stockholm suburb of Bandhagen in 1990, the Swedes have eclipsed convention, defiantly crushed the odds, and, most importantly, crafted 12 stunningly beautiful, intrinsically intense albums to become one of the best bands on the planet; whether that be live or on record. Ask any OPETH fan. Enquire with any band that’s shared the proverbial pine with the Swedes. Or, get a label representative to talk OPETH. They’ll all tell you the same thing: OPETH are peerless. And they’re only getting better.

OPETH are bringing the Sorceress to Australia … be prepared to fall under her spell.

Fans can register for pre sale tickets. Registration is now open, please follow this link. Fans who enter will also go in the draw to win 2 tickets to the SOLD OUT Sydney Opera House​ show.