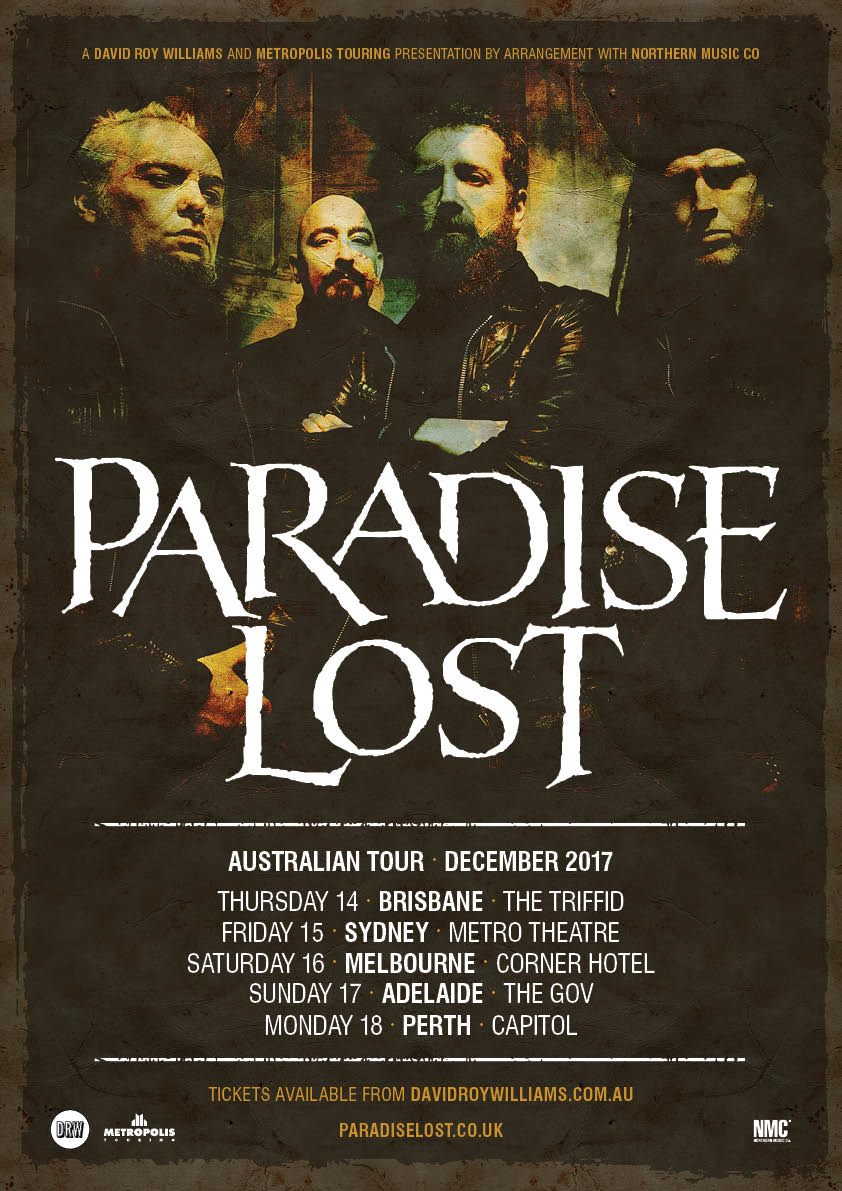 “It is during our darkest moments that we must focus to see the light.” Aristotle

“Fists pump and heads bang to Faith Divides Us, Death Unites Us while Gothic still sounds as bleak and cripplingly heavy as it did in 1991, Nick Holmes’s vocals full of snarling malevolence.” Louder Than War

Rare is it for a band to have had such a long lasting effect on the musical landscape they exist within. Since their formation in Halifax, West Yorkshire, Paradise Lost have thrived in perpetual darkness: a place where rays of light seldom threaten to break the black clouds, where nightmares last an eternity.

While the course of their sonic evolution has spawned countless others sworn to the dark, all pale in comparison to the original Gothic metal pioneers. Whilst their fifth album ‘Draconian Times’ provided the band’s international breakthrough, it would be fair to say without Paradise Lost, many of today’s doom-gloom bands would never have existed – 2nd album ‘Gothic’ still being considered ground zero for gothic metal.

Now celebrating their 25th year since the release of their debut album, Paradise Lost finally return to Australia for 5 shows only including their first shows in Adelaide and Perth ever!

“The band are simply flawless, with Holmes himself standing out as the most impressive with his vocals throughout.” The Metal Forge

The band will be performing songs from their groundbreaking catalogue and highlighting material from their astounding new album ‘The Plague Within’ on which Paradise Lost are once again refining the chemical equation to their sonic alchemy with the kind of creative invincibility few can afford. Described as a monochrome miasma of morbidly uplifting anthems and heart-aching melancholia, Paradise Lost deliver a pain born of the human condition itself as our fragile minds struggle to cope in a world overrun by demons.

“Paradise Lost have crafted a vital, utterly devastating work of art that stands as the best full-blooded metal release of 2015.” Stereoboard

It’s the love for what they do that has elevated Paradise Lost to the higher echelons of metal majesty. With a longstanding stable line-up that increasingly seems a rarity in today’s music scene, theirs is a creativity born of collective dominance: a mutual and shared dedication to creating something that will stand the test of time. And, of course, we’ve grown to expect nothing less from the Great British trailblazers.

“The body of work that PL have assembled over the years is pretty much unsurpassed in terms of its quality, but more than that, it’s the sheer dazzling breadth and scope of what they do.” Maximum Volume

If you’re searching for cheap thrills, look elsewhere. Paradise Lost is a band that sacrifice themselves through music, bleeding and suffering for their art in a way that puts many of today’s so-called artists to shame.

“Paradise Lost were and still are a brilliant band to see live, clearly still full of energy and passion.” Brum Live