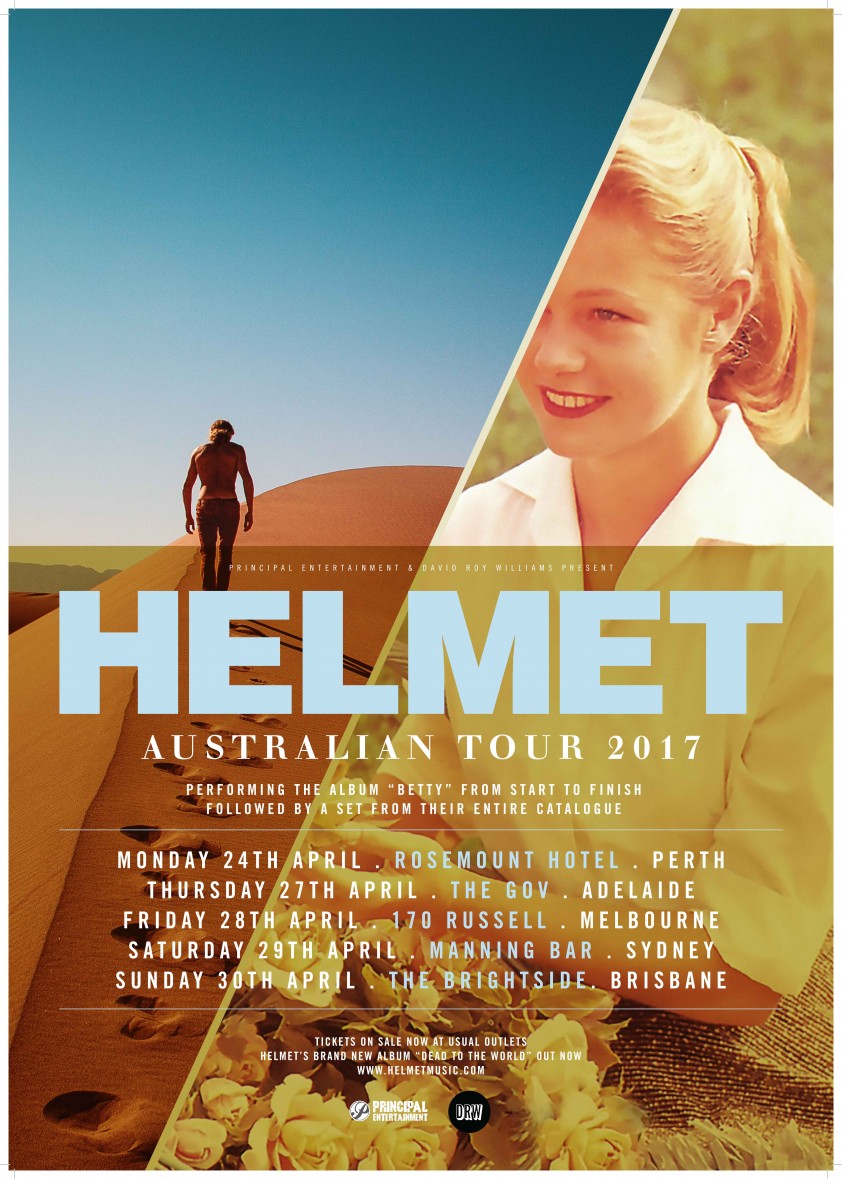 Performing the album “Betty” from start to finish, followed by a set from their entire catalogue

Principal Entertainment & David Roy Williams present the return of legendary riff lords Helmet on their 2017 Australian tour, playing the classic Betty album from start to finish, along with fan favourites and selections from their brand new album Dead To The World.

Across 27 years and eight studio albums, Page Hamilton and his band Helmet have set the standard for uncompromising and sonically brutal guitar driven rock.  Born in New York City in 1989, Helmet took the hard rock blueprint of forbearers like Zeppelin, AC/DC and Wire and set it aflame, bringing raw power, volume and an almost mathematical sense of swing to the well-worn form, igniting an all-consuming firestorm that continues to burn incandescent to this day. Without the sonic path clearing that Helmet took upon themselves as a raison d’etre, the heavy music universe would be a far less exciting place.

All of this is plainly clear when you listen to Helmet’s brand new album Dead To The World.  Produced by Page himself and mixed by award winning record producer, engineer and mixer Jay Baumgardner, Dead To The World proves the passing of time has done nothing to dull the senses, and indeed the rage of Hamilton and his carefully selected crack band of heavy-hitters. The razor sharp intensity, inventive art-rock riffology and burning dissatisfaction with society bristle across the 11 tracks and hark back to the halcyon days of albums like Betty, Meantime and Aftertaste which rewrote the rulebook for guitar bands in the 90’s.

It is the aforementioned Betty album that will form a major part of the band’s upcoming Australian visit with Helmet repaying the long-standing devotion shown by the faithful down under with a special start to finish performance of the 1994 classic. Tracks like “Wilma’s Rainbow”, “Milquetoast” and “Biscuits For Smut” will be brought to life on stages across the country in recognition of one of the most exciting hard rock records of the 90’s. Include a selection of all-time, back catalogue favourites such as “Unsung” and “In The Meantime” along with tracks from Helmet’s latest salvo Dead To The World and it’s sure that Australian hard rock fans will have plenty of reason for celebration in the New Year!